This is the End

Had another run through of the new WD Display Team (north) game for 2010 at the club this week. It is called 'The End' and covers the last year of WW2 in Europe.

We made a few fiddles and changes and now the basic mechanisms, units and map are set. There is some production work to do on the toys and the final version of the map, and a bit more research on timelines for the briefing material, but it is all looking good. Its first outing will be at the Sheffield Wargames Society show, Triples, later in April.

Otherwise not much gaming activity. I've finalised my lists of 2mm figures and phoned the order into Irregular for collection at Triples. It ended up being a surprising amount of gear, but to do something like Blenheim you need British, Dutch, French, Bavarians and Imperialists, and by the time you've added in horse and guns for all of them as well as foot, HQs, baggage etc it all adds up. I am particularly excited by the prospect of painting the Army pontoon trains. Well I suppose it takes all sorts....

I'm still working on a scheme for base labelling, at the moment I'm going with national coloured paint dots on the rear base edges, but I'll see how distinctive the flags are when the figures are assembled en masse.
Posted by Martin Rapier at 03:28 No comments:

To the Green Fields Beyond

Well, perhaps not quite the green fields... Ran another game of Drumfire last night, Spring 1917 this time (so Arras/Vimy Ridge sort of thing). A smaller game than before, one British and one French division against the new 1917 style German defence in depth.

More lavish support assets were available, and the Allies are definately learning how to do it right. Some 300 guns were available for an attack on a two mile front including some 15" rail guns, as well as gas shells, mines, British tanks and the first outing of some French Schneider CA-1s. The Allies had a very brief bombardment, concentrating on counter battery fire and wire cutting, and most important, leaving the ground relatively uncratered. The short bombardment surprised the Germans who did not have time to move up any significant reserves, but left the chains of concrete pillboxes intact.

Lt General Elsmore set some quite ambitious objectives, planning to break right through the Germans second line positions and into the field gun lines around a hill in the centre. There was a bit of grumbling about this from the division commanders, but the sheer masses of guns and other equipment on such a narrow front brought their grudging acceptance. 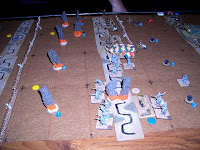 The initial assault went swimmingly, shrouded by the morning fog, and the entire German outpost line fell with fairly light casualties as the Allies maintained a tremendous barrage against the German positions and field guns. A pause ensued while the Allies reorganised, and then pressed on through the German pillbox line. This image is the German front line after mines had detonated, the gas had landed and the barrage lifted.

The next advance was a little more ragged as the Allies still hadn't quite got the hang of advancing with successive fresh waves to maintain the momentum of the advance. Some of their 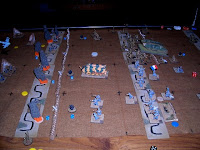 reserves had been delayed by the fog as well. The French tanks outran their infantry, forcing a number of blockhouses to surrender and then the Germans rather hesitently attempted to counterattack. Half the Germans didn't leave their positions and the rest were mown down or surrendered. On the other flank the British also easily repulsed a German attack but their advance in the centre had stalled as it hadn't proved possible to regroup the mopping up parties. In this image the French infantry have stalled still clearing the trenches and tanks have driven on ahead, detachments of British and French infantry have pushed on each flank but the British mass is delayed by some pillboxes still holding out. 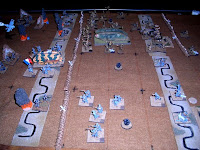 The French attacked the German second line, driving back the defending battalion at some cost to themselves, but the retreating Germans were mown down in the open as they ran back. The British far right reached is zenith however, as the attack faltered on uncut wire. The British are here seen massed in front of the German second line and French infantry are forming up for an assault too, but in the centre a handful of poilus and thesurviving Schneiders hav ecarried the second line and are preparing to attack the village. Unfortunately this is out of range of the French 75s, so the barrage has ended in this sector. More heavy guns could have continued to support the attack.


As the day dwindled, there was a final magnificent effort. The French infantry on the extreme left managed to advance right 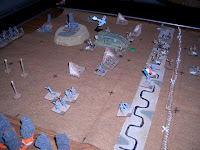 through the German reserve line, but their tank attack on the defended village faltered as the last tanks broke down and the leading waves of infantry failed to penetrate the defences and were shot down. The survivors huddled in the captured German positions to hold their gains. In the centre however, the British cavalry came galloping up and a combined infantry/cavalry/tank attack crashed through the German reserve line, ending at the foot of the hill. This the high water mark as the French and British push through the gaps between the defended villages, there is very little left in front of the French as most of the German field batteries in this sector have been destroyed by counter-battery fire. Sadly, time had run out at this point.

As night fell, the Allies were left having taken the entire German front line and comms line, penetrated the second line on a front of one and a half miles and had pushed two thrusts right the the reserve line up to the German gun positions. A glorious victory! The French in particular had excelled themselves, considerably exceeding their assigned objectives, although the Britsh had fallen short. The only problem was that although the French flank was secure, the British right was hanging in the air, and they were forced to withdraw from their salient in the centre, leaving the new front line running diagonally back to the southwest.

So, a pretty historical result, certainly in line with Bullecourt. The game seemed to work OK for this form the Allied point of view, but I need to have a further think about the German counterattacks as my plan for them to use heavy weapons for suppression etc just didn't work.

Tim Gow has published some nice photos of the game, which have come out rather better than mine:

Argh, I forgot to post last week, I see my New Years resolution is already going out of the window. I was away for work last week anyway so there wasn't much gaming happening.

I've finally finished 7th Armoured Brigade, and I was very pleased to find that the white gel ink pen I found in Rymans is the right diameter for writing unit tactical codes on vehicle markings. They are now safely stored in their box waiting for me to rebase 26th Panzer Div and then I've got a game in mind.....

I've been trying to track down a copy of 'Twilight of the Sun King' published by the Pike & Shot Society but sadly it is OOP. There is a free web based version but there are some significant differences. I contacted the Society and they are going to print more, so I'll just have to be patient.

Otherwise I've been wading through Chandlers 'Art of War in the Age of Marlborough' for some inspiration for my 2mm WSS project, and it has also rekindled interest in my long planned eighteenth century logistics game. Maybe one day.

On John Salts recommendation I recently purchased Steven Biddles 'Military Power' which applies economometric analysis to various modern conflicts to examine the influence of differences in troop deployment on combat effectiveness, a sort of modern Dupuy. It looks fascinating but I must be disciplined as I have to finish Chandler first, and then Patrick O'Briens 'The Wine Dark Sea' (which I started on the train).

Anyway, hopefully we'll be doing 2mm ACW tonight, so I'll get a chance to look at some 2mm strips for my shopping list, and we'll maybe do some prep for a WW1 game next week.

Finally, many thanks to those people who let me know that my blog had been corrupted. A bad widget, which I've removed and the problem has been fixed. Many apologies.
Posted by Martin Rapier at 08:44 1 comment: