TimGow put on another game last night using Ricahrd Brooks 'OP-14' operational WW1 rules. A rather larger affair than last time, The Battle of Gumbingen, with three Russian Corps vs one German Corps (rising to three and a half German Corps plus a cavalry division).

I took the Russians, and having actually read the rules had slightly more idea what I was doing this time, in particular using reserves to keep the firing lines up to strength. The Russian steamroller rolled forward, and managed to bludgeon its way into Gumbingen, smashing one German Corps in the process. The Germans were somewhat handicapped by splitting their small force, the detached elements being then crippled by being out of command which allowed the Russians to concentrate the best part of two Corps against one division with predictable results. One Russian brigade in particular distinguished itself by drawing mandatory attack cards, but rather than being shot down in heaps, it drove almost unaided up to and then past the town.

By mid afternoon the Russianshad pretty much shot their bolt however, and although one Corps was strongly dug in around Goldap, the other two were overstretched with one already exhausted and the other well on the way. Fresh Prussian troops were counterattacking strongly and it looked like a withdrawal at nightfall would be in order.

I thought the game looked pretty good and flowed well. It was particularly pleasing how the firing lines solidified into strange angles and re-entrants, looking very much like the unit fronts in battle maps of the period.

Looking forward to the next outing.
Posted by Martin Rapier at 05:35 3 comments: 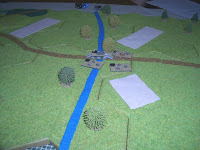 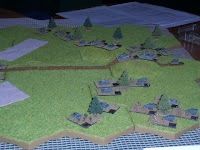 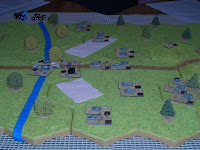 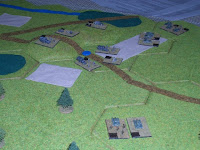 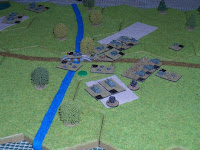 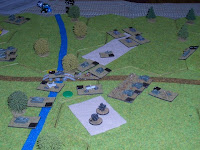 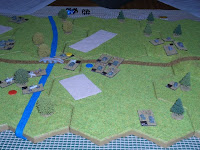 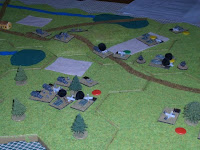 Further west, more German reinforcements (another infantry battalion plus batteries of Flak 36 and 100mm K18 guns) reinforce the defenders just in time and the Russian assault beats itself to pieces against the Pakfront. The T34s are knocked out by 88s and K18s and the KVs fall back in disorder after a failed overrun attack on the dug in German infantry. Only two companies of the original defenders are left on their feet at this point. Welcome to the Eastern Front!
I was very pleased with the way this game (broadly) followed the flow of historical events, although in the actual battle 11th Panzer Regiment withdrew in disorder after encountering the KVs. 6th recce Bn and a column from 114th IR were overrun by the Russians, but their attack was eventually stopped by a hastily formed pakfront east of Rassienie, which we managed to recreate. The German player was suitable awed by the mass of Soviet armour, but by great efforts did finally manage to stop them. Historically the attacks continued for a few more days as the rest of XIVth Mechanised Corps straggled up to the front, and after the fighting finally ended, some 250 tanks were found scattered in an arc east of the town, many of them out of fuel and ammo. One of the KVs made its way northwards and parked itself on the Rollbahn, where it held out for six days before being destroyed.
Posted by Martin Rapier at 05:59 No comments:

The Guns of August

Tim Gow put on a small session last week to try out Richard Brooks new Operational WW1 rules. Tim has already reported in some detail on the various games he has run with these, but I was pleased to get a chance to try them out. Suffice to say I was robbed, even if the Russian airforce did distinguish itself. The rules themselves look very promising, and in due course I'd like to try them out with my various WW1 armies.

Speaking of WW1, I finished painting and basing all the heavy artillery I bought at Triples and that is now safely stowed away. I was particualrly pleased with the 6" howitzers, they look very imposing pieces and I managed to get that sort of stained metallic look on the steel wheels by heavily drybrushing steel paint on the rims followed by a heavy brown ink wash.

I had promised to run a game this week at the club, and as I've been working on the next scenario for 6th Panzer Divs tour of the Baltic States, I finally sorted the terrain for that out yesterday. The toys are all sorted and I just need to finish typing up the briefings.

Next major painting job is all the 2mm WSS stuff I bought, but I haven't had time to make a start on that yet.
Posted by Martin Rapier at 01:05 No comments: