This one is a bit of an oddity, a Sturmtiger converted from the Airfix one. Although I've done a fair few 20mm conversions, I can't claim the credit for this one, as it came my way via Mr Gow (originally built by his friend JR I think) .
I gather it was based on an article in Airfix magazine which I must have missed or I might have been tempted myself! 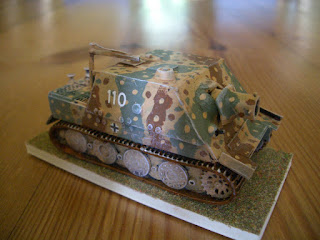 It is essentially just a huge armoured box on a Tiger chassis and armed with a 380mm (!) rocket propelled mortar. Its closest Allied equivalent was the AVRE Petard. This conversion captures the heft of the thing quite well. Unlike the Petard, this one is a breech loader, but the huge size of the rounds meant the internal storage was very limited, so the crane on the back was to help load new rounds through the rear hatch. 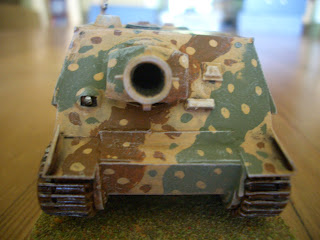 The gun barrel here has been converted using a biro pen. The real thing wasn't quite so wide bored as 380mm is only 15", but it does look fairly terrifying. 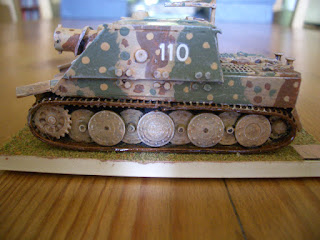 It sits nicely on the suspension. The turret numbers came out of the spares box. 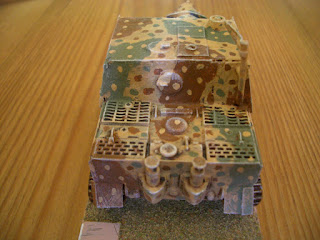 And the rear deck is suitably imposing with nice dep engine grills. I didn't dirty it up too much, just a bit of mud and drybrushed dust.
All I really had to do with this model was some minor repair work and a new paint job. This example is based on one captured by the US Army in 1945 (several platoons of Sturmtigers fought in the Bulge and at Remagen where they were tasked with destroying the bridge with gunfire!). It has a well defined 'ambush' scheme although the real one had a slightly more dense pattern of spots.