Regular readers may recall I had a slight eBay accident last year, as my search for some WW1 15mm Russian figures that I didn't have to paint myself yielded instead a 15mm WW1 French Army...C'est magnifique. Although I don't usually let myself be distracted by impulse buys, that one worked out OK in the end.

Anway, after Xmas I decided I was in need of a new years sales wargames treat, so resumed my search for Russians once more. This time it turned up a ton of suitable stuff which was duly assessed and ordered (I was aiming for enough figures for two Infantry Corps and two cavalry divisions for OP14). 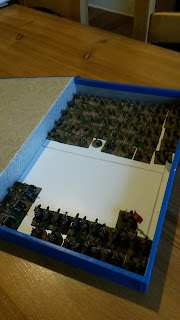 After rebasing the lot, I ended up with a fair bit of kit and few spares left over. Some of the figures needed some TLC, especially the cavalry which by and large I had to completely repaint. But not the horses. I hate painting horses. 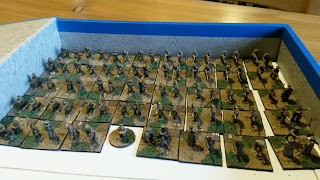 The infantry en masse, leaders, MGs and engineers to the fore, plus a lonely FOO. 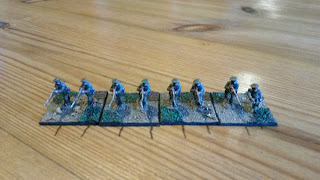 There was a load of these rather splendid chaps. Make of very, very bendy metal with huge hats, Pavlov Grenadiers no doubt. They even have white rifle slings! Minifigs maybe, or Essex? Just needed their boots repainting. 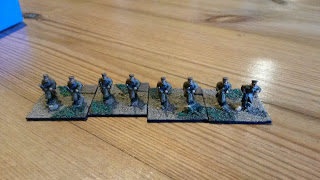 This next lot are a bit more dubious, seemingly Peter Pig chaps in greatcoats. Only a bit of minor repainting needed of their rifles and strange brown boots. 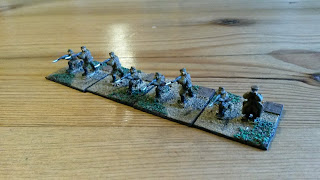 This lot look rather more raggedy. Well, the figures were sold as 'WW1/RCW', so I guess these were some sort of RCW types. I painted their puttees black so they look like sapogi boots. They have smaller hats than the Pavlovs, perhaps they just took the wire stiffeners out, and I suspect rather more typical of WW1 Russians. 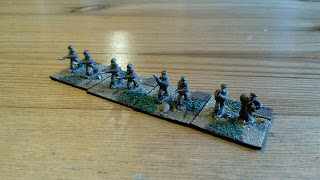 Oh dear. This lot don't even have proper boots or puttees. I guess they are PP RCW militia, and they will do for militia types. They are WW1 Russians, lucky to even have rifles, and from a distance, I really don't care that much. 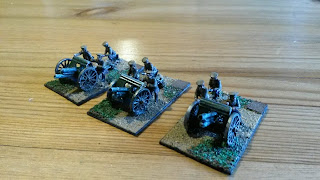 I bought a few Putilovs as support, one of which has the recuperator on upside down. Perhaps it is a howitzer? As I don't particularly care (see above) most of the Russian artillery support may well end up bearing a suspicious resemblance do British 18pdrs, 4.5" howitzers and 6" guns. They are all guys in flat hats, brown uniforms and equipped with green guns after all. 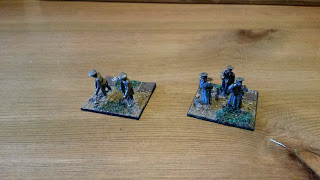 There were quite a few officers provided, plenty to make up a few decent command stands. The gunners also yielded some useful figures wielding tools, so I made up some engineer stands. Mustn't neglect the combat support arms as they have a vital role to play. 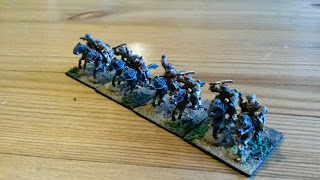 Unfortunately the vendor couldn't find the flat hatted WW1 Russian  Cavalry he'd listed, so he sent some Cossacks instead. These guys are rather fun and will do for WW2 as well. A moderate amount of repainting of clothes (I hesitate to call them 'uniforms'), webbing, hats, rifles and flesh was undertaken. They also got a proper officer in a flat hat and blue trousers. 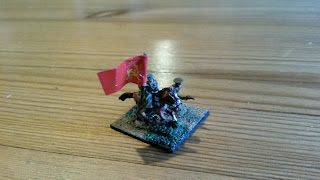 Eagle eye readers may have noticed a big red flag in the first picture. Not very Tsarist, but useful nonetheless. I based this up as an HQ element with a flat hatted officer who will do very nicely for RCW Red Cavalry or a WW2 command element. I filed down the flag bearers Budvinovka into a Ushanka/Cossack hat (if you don't look to closely). 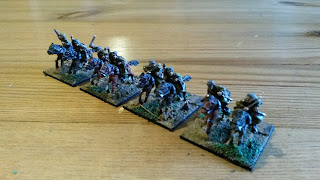 It turned out that apart from the Cossacks, the rest of the cavalry were Budennys Red Cavalry in light grey greatcoats and Budvinovkas. Not much use for WW1 or WW2. After some slightly grumpy eBay exchanges, the seller kindly sent me way more figures than I'd paid for to compensate, and after a bit of head scratching, I repainted them in dark brown greatcoats and filed their hats down into Ushanka/Cossack Hats.

This worked out rather well, and as unexpected bonus I now have enough cavalry for three entire WW1 divisions, as well as a complete WW2 cavalry division at my preferred scale (and a full pre-war Cavalry Corps for higher level games). It is also a whole load of horses I don't have to paint. Good result all round!

So there we have it, Russians sir, thousands of them. Hopefully coming to a wargames table near you soon. One thing slightly bothering me is that they could do with some Austrians to fight...