My attempts to buy every single model Zvezda have ever produced continue. I wanted some sort of spotter/liaison plane for the Germans. Really I was after a Storch, but they were out of stock so instead I picked up a more unusual Henschel 126B. 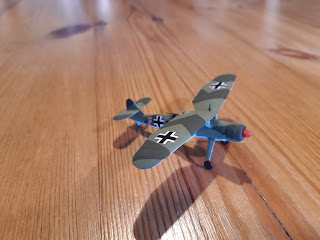 It is a delightful plane, it really has an interwar look going for it. It is also a big old bird with a massive fixed undercarriage. 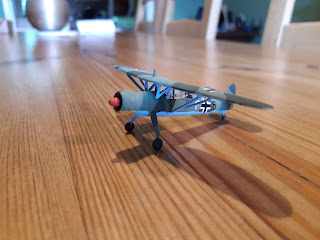 Struts are never my favourite thing, but this went together even easier than the Po-2. I snap fitted the wings in place then glued them once they were lined up. As it has a semi open cockpit I didn't paint the canopy in this time, but instead left it clear plastic and fitted it after the other painting. It was a bit fiddly to fit under the wing but I cut off the locating lugs beforehand which made it much easier. 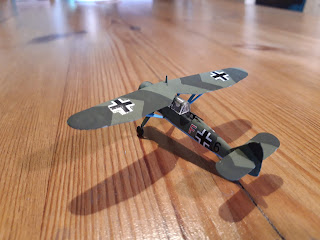 You can see the open gunners position here. It is a shame there aren't any crew supplied, but I suppose I could add one made up from a spare tank commander at some point. I did this in early war splinter camo as the wings and ailerons are so big and it sets them off nicely. 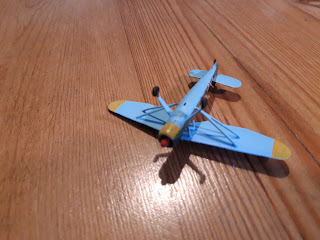 Usual plain underside, although I did the yellow bits for some contrast. 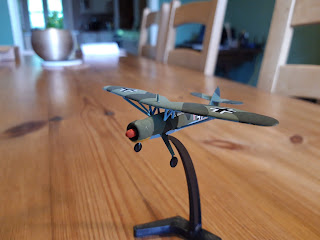 Here it is off spotting the dining table. The decals are straight from the kit, and not very subtle! As usual with Zvezda, they don't supply tail swastikas, but I'm not too bothered. A really nice model and highly recommended.