I've been looking for a few representative battalion sized NWE engagements to try out a revised version of 'Battlegroup' by John Armatys. Originally these were a pretty lean and fast playing set of rules, but somehow along the way I've managed to turn them into a bloated monster with endless fiddling and revisions. I went right back to the original set we played at COW some ten years ago, and added in the merest sprinkling of changes based on our experience of playing them in the last decade.

For scenarios, I recetly acquired a copy of 'Mapping WW2' which included various sets of defence overprint maps of the German defences around and inland from Sword beach, so I had another look at 3 Divs drive on Caen, and in particular the actions at Morris, Hillman and Periers Ridge. I rapidly discovered enormous discrepancies and contradictions in the various accounts of these actions, and settled on an 'average' version of these, partly with an eye to giving a decent game.

The first scenario was based on the 1st Bn, Suffolks attack on Coleville-Montgomery and the battery at 'Morris' (WN 16). As far as possible the map was based on the 1944 invasion map with overprints, which clearly show the positions of the company of Ost battalion troops covering Coleveille, but which are absent from most accounts. Apologies for the poor quality of some of the photos, clearly all the explosion were making the camera shake 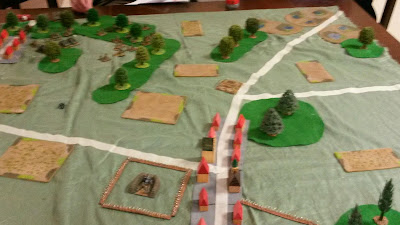 A general view of the battlefield from the south (which covers roughly two map squares). Morris is in the foreground with the Suffolks forming up area east of Hermanville in the distance. The marshes in the top right are the boggy areas behind Sword beach (which itself is offtable).

We played this as a team vs umpire game, so the Germans are entirely hidden (apart from the known battery position). John was CO of the Suffolks, and Jerry and Graeme his trusty subordinates. 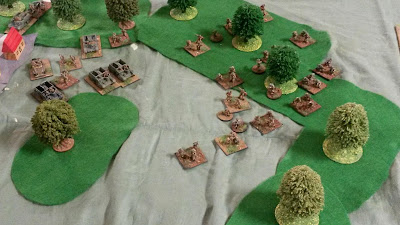 The British formed up to move out. John kept the carrier platoon in reserve, whilst Jerry took A company, the attached MMG platoon and 76th Field Regiment observer to establish an OP and base of fire. Graeme took B, C, and D companies left flanking with the battalion mortars in support to clear Coleveille from the north. 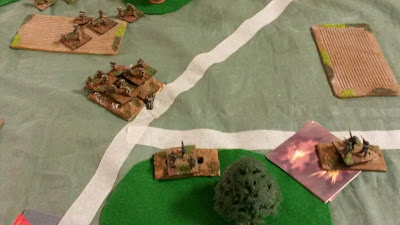 All went swimmingly well at first. The entrenched positions by the road were found to have been destroyed by the RAF and largely abandoned, but some enemy opened fire from trenches along the St Aubin road, and a firefight with B company ensued. 76 FR dropped a regimental concentration on one of the enemy positions, neutralising it. 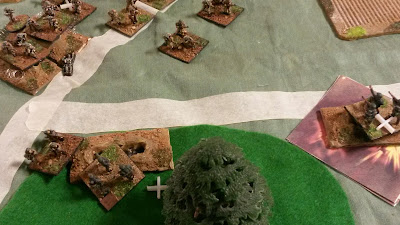 The enemy were soon pinned by small arms and artillery fire (one platoon from C company also being pinned in the exchange of fire). The reserve platoon of B company, and remaining platoons of C company moved to assault. 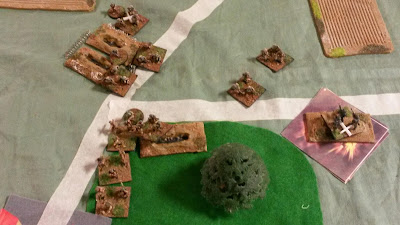 The western positions were cleared and D company moved through to enter Coleville. It was discovered that the 'Germans' were actually Azerbijanis and only too willing to surrender once the British got close. The hit platoon of C company proved very hard to reorg though. 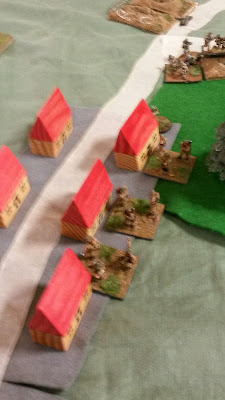 D company clears down the east side of Coleville. There wasn't any opposition at first, although they did find a house full of German casualties and medics. Further into the village, some light small arms fire came from a compound to the east. 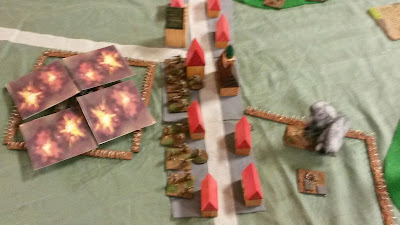 The enemy troops in the compound were stonked with smoke and HE by the mortars, and a regimental concentration landed on Morris as B and D companies formed up. C company had found more Russians in the woods (who all surrendered) but some small arms fire came from Morris, which pinned a platoon of B company. 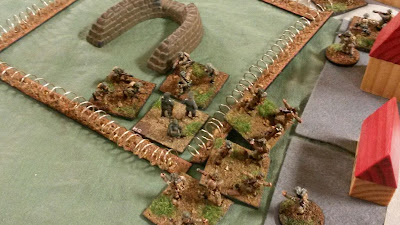 Once the barrage lifted, the assault went in. The wire had been gapped by the naval bombardment earlier in the and he artillery positions had largely been destroyed with the surviving gunners only too happy to surrender. A tougher nut proved to be the battery HQ which recovered from being pinned and held off an entire company asasult from their trenches, however B company joined the attack the HQ was overrun in a second attack.

Overall this was a very satisfactory game, and I was pleased with how it went, particularly how quickly the turns were resolved. We'll need to play a few more ties to see if I've managed to restore the rules to their former glory, but it is looking promising. The tweaks I'd made all seemed to work OK, but it is always easier to run games with an umpire, so I need to try an opposed game and also perhaps introduce some tanks next time.

For those interested in 'Battlegroup', the original was published in the Wargames Development Journal:  The Nugget in issue 204.