I've been meaning to get some 15mm Cromwells for a while (I already have 6mm and 20mm ones) as  had a couple of scenarios in mind which needed them. The QRF Covid-19 offer was still on, so I put in another order.

An interesting tank, the first WW2 British designed tank which was actually reliable enough to use for extended periods in combat, it would have been great in 1942, shame it didn't turn up until 1944. It did form the basis for the far better Comet and incomparable Centurian of course. 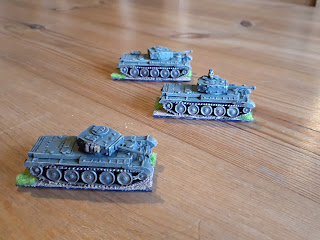 Here they are, manouvering across the dining table. Nice simple models with just the hull, tracks and turret with a separate (single piece) hatch. The only fiddly thing was the hull BESA mount which was a separate moulding, when it could just as easily have moulded on. A blob of blue tak and super glue sorted it out. 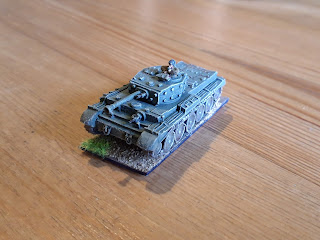 I wouldn't say these are the greatest Cromwells ever. The wheels are a bit plain, and something has gone horribly wrong with the mantlet which is modelled as a raised plate instead of a great big hole in the front of the turret! Perhaps the sculptor got his shadow and highlight mixed up. It isn't hugely noticeable but is annoying as it isn't exactly hard to get it right. Engine deck. These are pretty big tanks (in length anyway) in common with other Cruiser designs. The rivets on the turret stand out well, one of the distinctive features of the vehicle. I added some stowage to a couple of the models from the spares box. 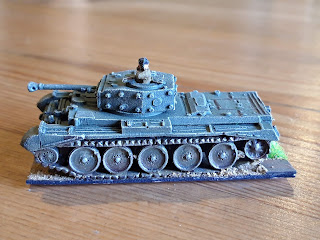 Despite the criticisms above, they 'sit' very well and look rather nippy. They also went together very cleanly with very little flash or distortion. I put a commander in this one (PSC, lightly trimmed). I had to cut the hatch in half but it was thin enough to make this a simple job.

So there we go, a decent wargaming piece (and very good value) which went together fine, if you can overlook the turret issues. I expect the PSC ones are better models but I didn't need five. I just finished them in plain khaki green and didn't bother with any markings. I suppose I could have done some air recognition stars but the upper surfaces are quite cluttered and it would have been hard to get he decals to stick down. Expect to see them impaling themselves on 88s dug in on Bourgebus Ridge at some point.