For some reason I had a hankering to do a Battle of the Bulge game, perhaps it is something to do with painting all those US vehicles. Anyway, I'd volunteered to put something on at the club and my attempts to come up with (yet another) decent set of brigade level rules having failed, it was back to good old Memoir 44. After the last game (Kurovtsky) I'd decided to strip out a lot of the chrome, which frankly didn't add much to the gameplay and slowed everything down. I reviewed and simplified the unit types back to something closer to the original concepts (although the endless M44 expansions add ludicrous amounts of chome themselves) and the only real addition I made to my existing mods was to add the support rule from the Napoleonic and Ancients sets, which everyone had agreed last time would be a good addition.

I had a dig around for M44 Bulge scenarios and came up rather short on the Interweb as many of them were 'classified', but I did come across one gem at the end of the original rulebook, St Vith.

Boardgame Geek notes that this scenario is often overlooked, but is actually very tense and well balanced  with lots of options for both sides. I also noted that the Germans get no less than four Tiger units.... a bit of research turned up that this action was modelled on the assault by 18th and 62nd VGD on 21st December, supported by no less than the mighty 506th Tiger Bn, the only Tiger Bn in the entire German Army to have four companies. As this would let me field every single 15mm King Tiger I own, it was too good to pass up. 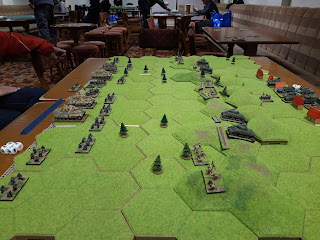 The battlefield from the north. A rather unsnowy Bulge as I didn't have access to Tims snow boards. St Vith is on the right, and the feature in front of it is a big rocky ridge called The Prumenberg, which the US is defending. Two Regiments of the 106th Div have just surrendered,freeing up hordes of Volksgrenadiers to attack St Vith. 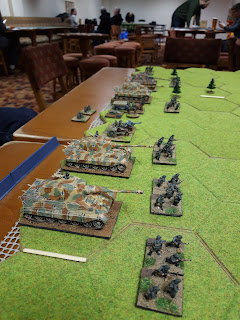 A lineup of Tigers. The 506th had fifty Tigers during the Bulge, mostly Tiger IIs although Pz Kompanie Hummel (of Arnhem fame) still had a few late production Tiger 1s. The battalion had mainly dawdled in the rear of 4th Panzer Army causing massively traffic jams, and had plenty of time to mass for the attack on the 21st.

I reckon each unit of German infantry is the equivalent of half a battalion of VG, so there are three regiments worth in total. I rated the Tigers as heavy tanks with AT weapons, and I also gave the VG a couple of mortar support options, but most of their heavy weapons were already factored in. 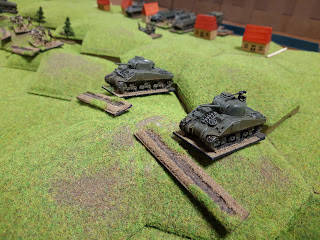 Some of the US defenders on the Prumenberg. The remains of 424th Regiment, 106th Div, and CCB, 7th Armoured Div (plus bits of 9th AD). The US had six tank units, a mix of the tank and tank destroyer companies from the 106th and CCB/7. 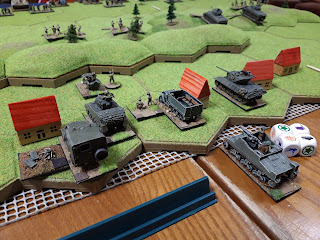 US Reserves in St Vith. As the Germans were stronger than the original scenario (with proper Tigers), I also beefed up the US. I upgraded their reserve infantry to an armoured engineer company and gave them a battalion of M7 SP guns offtable. I also gave them a heroic leader in the form of Brig General Clarke, who by now had taken over from the disgraced General Jones of the 106th. 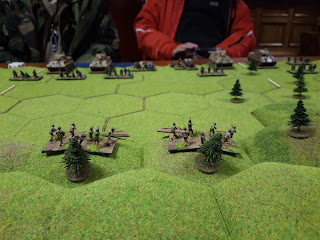 A rather scary view from the Prumenberg. I reckoned each pair of US infantry units was roughly a battalion - each being the remains of a battalion of the 106th, reinforced with  an armoured combat team from CCB/7. The US infantry strength was therefore around a regiment, with an armoured infantry/engineer combat team in reserve, plus a couple of tank/TD battalions. 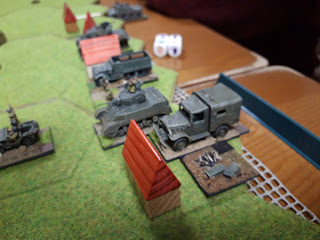 I gave a each side a supply dump/HQ as a static terrain feature. The US one featured my Roco Dodge radio truck. 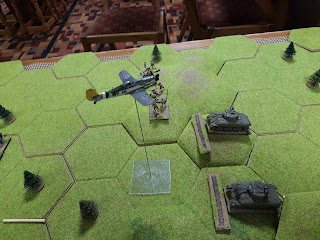 The action opened with the unexpected arrival of German airpower, in the form of this late model FW 190. Against the dug in US troops, the damage was minimal fortunately, although it drove the US infantry back to the reverse slope. 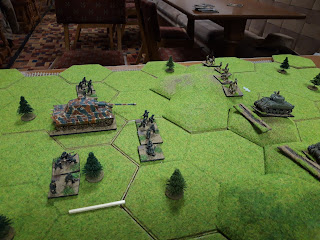 This was followed up by a wave of VG, supported by a company of Tigers. Pz Ko Hummel no less (Graham Evans old Henschel turret TII which  I picked up at COW years ago and repainted). 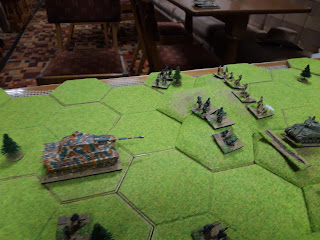 The VG pressed on up the slopes. 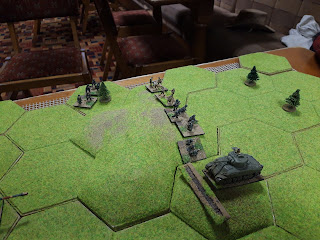 And forced their way into the US position. The US were handicapped by a small card deck, as the assault was preceded by a massive artillery bombardment which knocked out their communications. 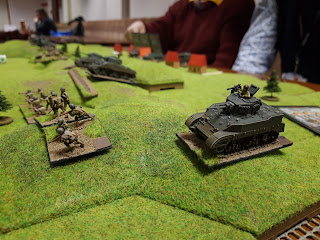 Over in the north, some of the US reserves moved up. This is one of my PSC M5 Stuarts. 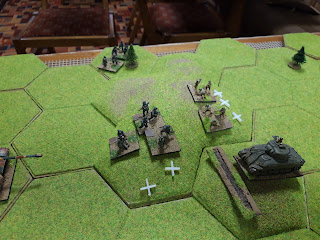 The battle for the southern ridge continued to rage, with heavy losses on both sides. The Germans were pushed back again. 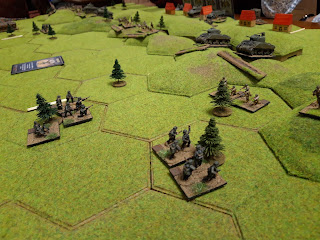 German infantry pushed forward in the north into the woods. 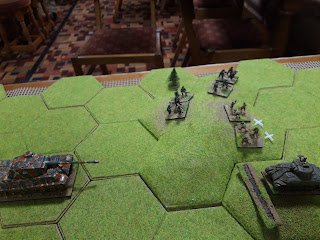 And pushed forward again in the south. 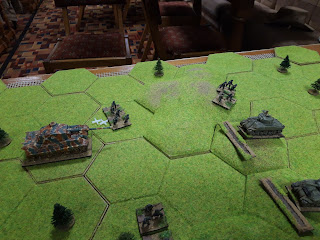 A final push routed the last of the US infantry, but the Shermans were still holding out. 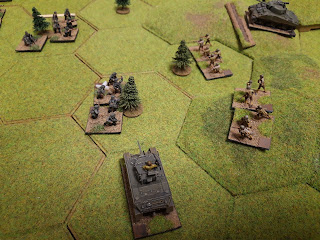 In the north the Stuarts led a US counterattack. 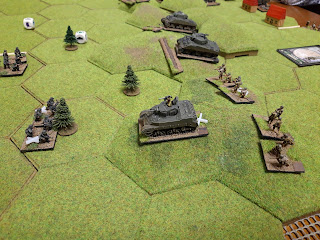 But it was beaten back by VG in the woods. 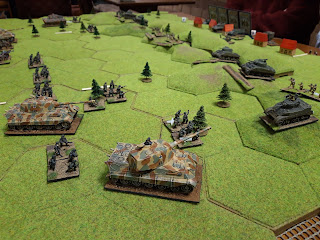 The Germans responded with two companies of Tigers. Ooer. 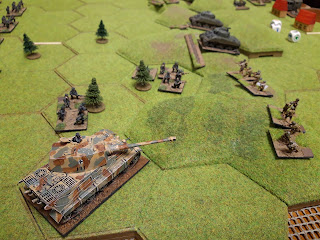 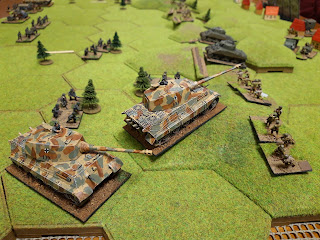 And the Tigers rolled up the hill. 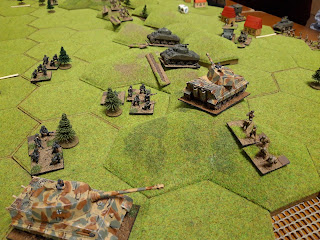 And over the hills and far away in a magnificent breakthrough attack. 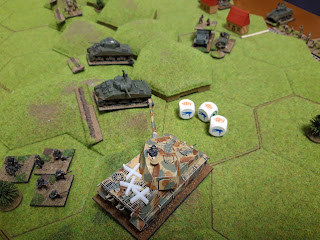 Embedded in the  middle of the US position, this lone Tiger company came a bit unstuck. The Shermans were very lucky, no doubt Telly Savalas was driving. 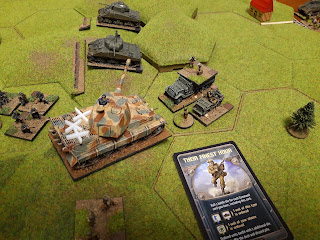 General Clarke led a heroic counterattack and finished it off.. It really was Their Finest Hour. 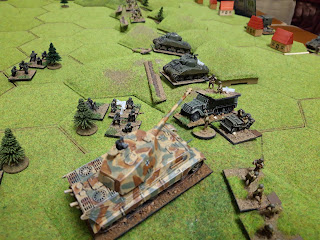 The US counterattack continued over the hill, destroying the other Tiger company. 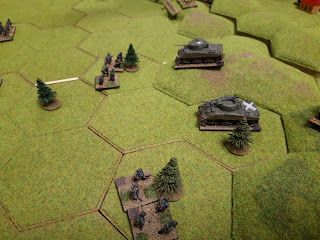 And the Shermans set off in pursuit, pushing back the startled Volksgrenadiers. What a heroic action, well done General Clarke! 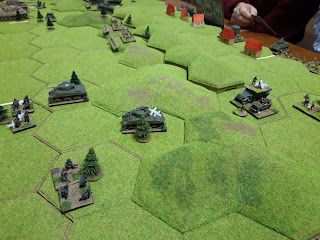 Things were looking a bit sticky for the Germans as their right flank was in danger of collapse while the exploiting Shermans rampaged around. The Germans had lost five units now (the  breakpoint was six), while the US were on four. 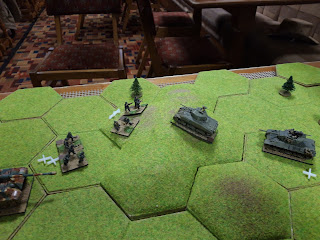 The Americans decided to clinch their advantage with an armoured attack on the VG in the south. Although it pushed the Germans back, it didn't didn't destroy another unit. 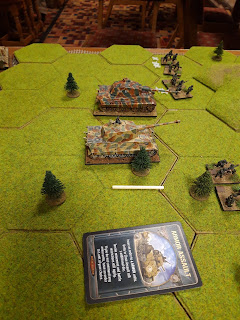 The Germans then responded with this rather unfortunate Armoured Assault card. 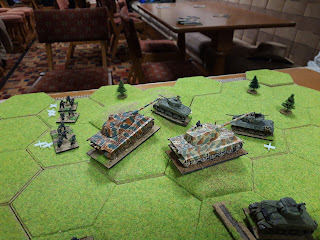 The Tigers rumbled past their infantry and rolled up over the Prumenberg. 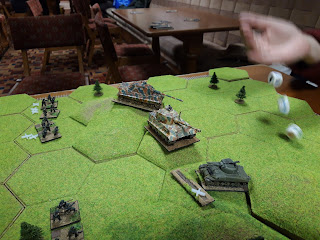 They obliterated the Shermans and M10s in front of them, seizing victory from the jaws of defeat at the last moment. Note the action dice rolling shot.

With that, the action drew to a close. After a rocky start for the US everyone agreed it had been a really tight game and went down to the wire. I was also so delighted to have got some of my less used toys out, I think the last time I had any King Tigers on the table was a game of the Sandomierz bridgehead some years go. The US counterattack was a stroke of genius and very nearly won the game for them, but the Germans had carefuly managed their troops and victory was theirs. Both sides made good use of combined arms, although both sides suffered from over-impetuous advances at times.

Strangely, the game mirrored reality - the VG surged forward after a heavy bombardment, but it was the intervention of the Tigers following up which swung it. They very unfairly used flares to blind the Sherman crews on the ridge and knocked them out, then half a dozen Tiger IIs festooned with cheering VG crested the ridge  and at that point Gen Clarke decided it was time to pull out. The scenario was very cleverly designed, by putting the tanks behind the infantry, it avoided the usual suicidal tank charge which happens so often in M44 games.

Great fun, and I think I'll stick with this version of the rules in future.