Along with the club games day, another seasonal outing was a long weekend in Prague after New Year (I wasn't due back at work until the 6th Jan). I was fairly unfamiliar with the history of the city, apart from highlights from the Thirty Years War (the Defenstration of Prague and the Battle of White Mountain) and all that unpleasantness in 1938 and 1968. 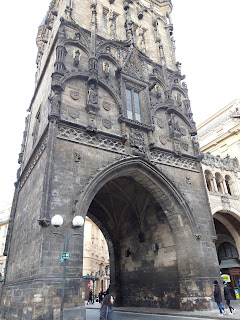 This s the Powder Tower, part of the old city defences built by Charles IV on the northeastern side of the inner city. The walls are now rows of shops and the old moat is a boulevard. 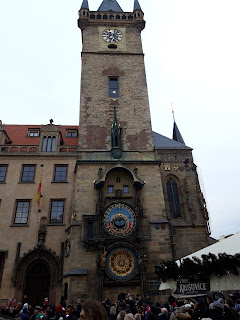 The Old Town Hall, which features an amazing astonomical clock which is around 600 years old. 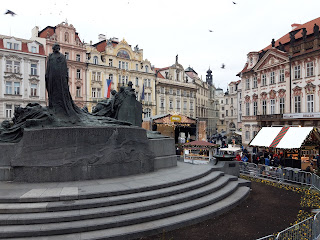 A memorial to Jan Hus, of Hussite Wars fame. Also an inspiration to Erasmus and to a greater extent Martin Luther (the original one, not the 1960s one). 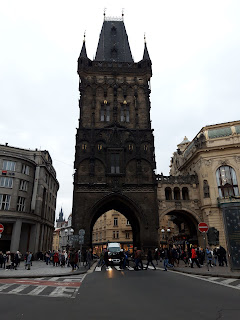 The Powder Tower again, with some traffic to give an idea of its size. 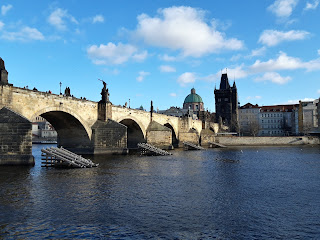 The boulevard which was old moat leads down the Charles Bridge on the south side. This was also built by Charles IV, by which time the Old Town had been supplemented by the 'New Town' outside the old defences. The New Town was built in the 1400s...

Like Berlin, Prague has a museum dedicated to the years of communist rule. This one occupied a similar size as the DDR museum in Berlin. 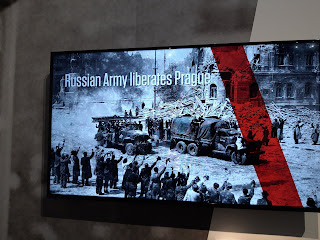 I think the caption rather says it all. 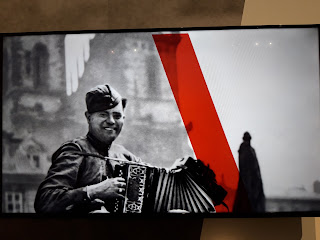 I was rather taken with this cheery Russian accordian player. 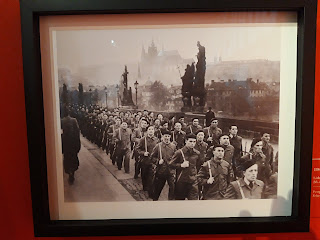 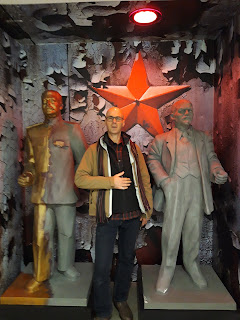 There was a posing spot with Stalin and Lenin. How could I resist? Power to the People! 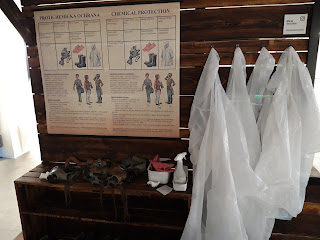 And an interesting display about Chernobyl. The VI Lenin Nuclear Power Station isn't that far from Prague, as radiation clouds blow. 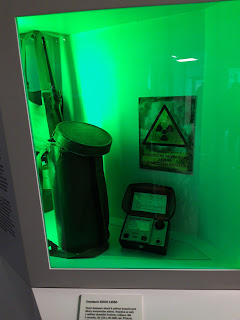 A moderately high rated radiation dosimeter. This one goes up to 3,500 things (I guess rads not sieverts). 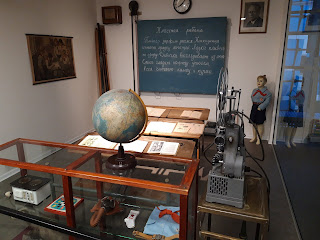 There were examples of typical shops, workshops and this school room.
The museum was OK, but not as good as the Berlin one, far too wordy. 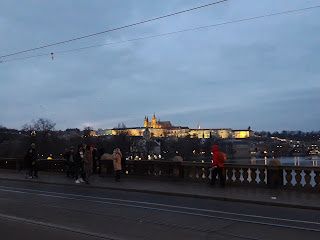 The Old City of Prague is nestled in a curve of the Vlatava river, a reasonable defensive position which meant the walls didn't have to be as long. On the other side of the river is a big hill, which is naturally a much better place to put the castle. Here it is looming on the horizon. It overlooks the Charles Bridge. 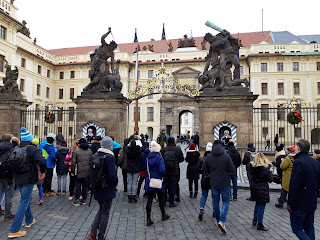 The 'castle' is pretty grand, more a collection of huge palaces as it was the capital of Hapsburg Empire for quite a long time. Now that was something I didn't know. 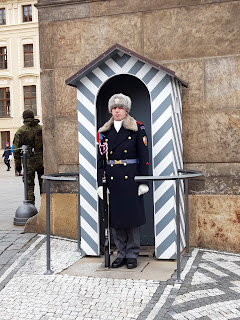 Ceremonial guards armed with very shiny SKS carbines. Soldiers with camo uniforms and AKs can be seen lurking in the background. It was very, very cold so the fur hat and coat were a good idea. 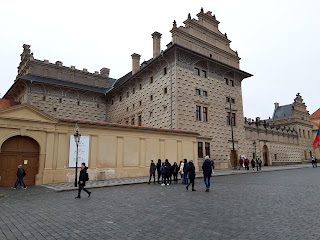 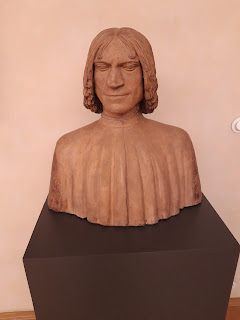 This is one of the Medici's, Cosimo I think. 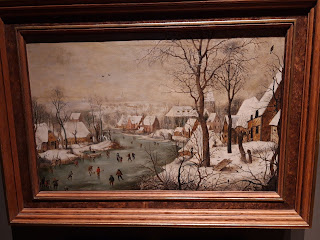 One of the numerous Breugal winter scenes. 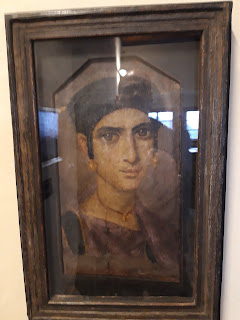 Tucked away in a corner was this Byzantine painting (it looked like it was painted on wood). Amazingly it dates from the second century, I think it is the oldest modern style painting I've ever seen. 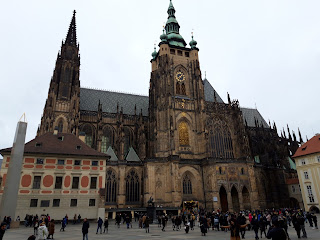 St Vitus Cathedral. This is a vast building and dominates the skyline of the city.

One thing I was very excited to discover close to our AirBnB was a musuem to the Czech paratroopers who assassinated Reinhard Heydrich in 1942. 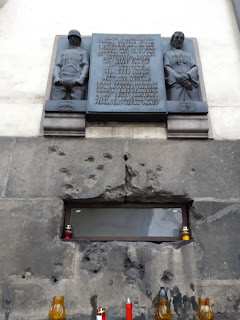 There is a plaque outside, bullet holes still in evidence. 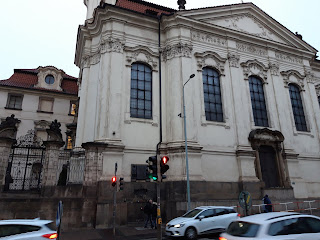 The paras made their final stand in this Church after being betrayed to the SS. The museum is in the basement and crypt. 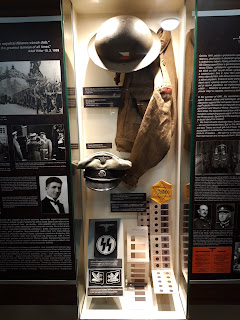 The basement museum has lots of photos, background information and various artefacts. 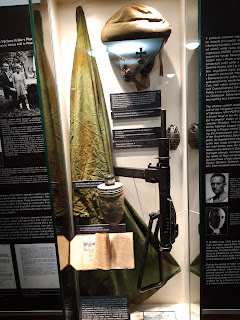 I was particularly taken with the jump helmet and this useful piece of parachute as a colour reference. 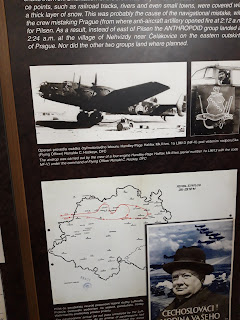 There is loads of information about the operation, they jumped from this Halifax. The map shows the Luftwaffe plot óf the flight route. Although this museum is also quite wordy, it works much better than the Museum of Communism as it is so much smaller and more intimate. 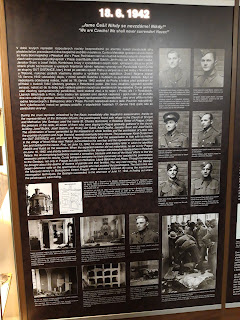 The six Czechs who fought at the church. 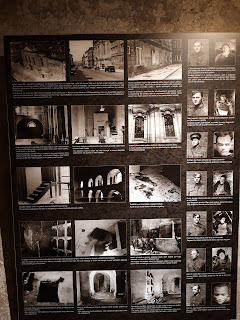 The aftermath of the gun battle at the Church. The paras mainly committed suicide rather than be taken prisoner 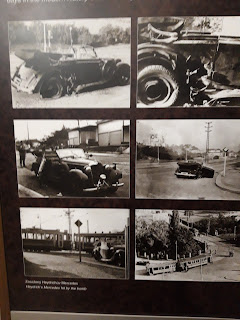 Heydrichs car after been partly demolished by an anti-tank grenade. He died of wounds later, a very unpleasant person and good riddance. The Germans inflicted appalling atrocities on the Czech population in reprisal and it has become a symbol of Czech resistance to occupation.

I've not really done the museum justice, it really was excellent and very moving. It is also free, with voluntary donations. 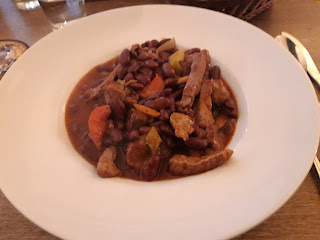 On a more cheery note,I was pleased to find that the Czech diet is similar to the Hungarian one, mainly meat and beer. Here is a healthy eating option, yes there really are one or two vegetables amongst the pile of meat and beans.