I've been fiddling around with some brigade level WW2 rules for  a while now. This seems to be the level of WW2 warfare that it is hardest to get right as the differences in direct fire ranges are still significant, but there are a host of formation level considerations which can add a mass of extra complexity. Once you are pushing divisions around, a lot more can be abstracted out, and if it is only a company or two, then traditional shooty wargames mechanics will usually do the trick.

Anyway, this lot are aimed at getting a brigade level engagement resolved in at most a couple of hours, and ideally on a small (3x4 or 3x3) table as that seems to be size we most commonly use at the club now as the tables in the bar are a bit smaller than at the old club venue. The concepts and mechanisms are a mixture of different inspirations, but it probably bears the closest resemblance to Johns 'Brown Bess'. I tested it with a One Hour Wargames scenario, slightly bodged to resemble the initial attack on Krinkelt and Rocherath during the Battle of the Bulge. 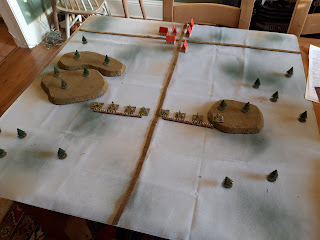 View from the west. Two battalions of the 99th are dug in covering the track to the crossroads. The hill features are dense woods, impassable to vehicles and half speed for infantry. 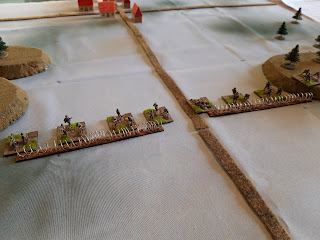 This is the standard setup from the OHW scenario. Each stand is roughly a company and the battalions are deployed in extended line. The US entrenchements provide 'medium' cover and rendered the German barrage largely ineffective. 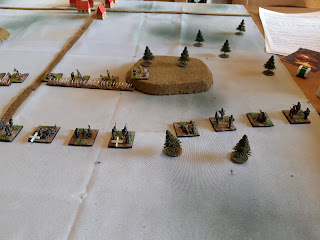 Two battalions of 277 VGD march on. They came on in march column and deployed into line. US defensive fire scored a few hits. 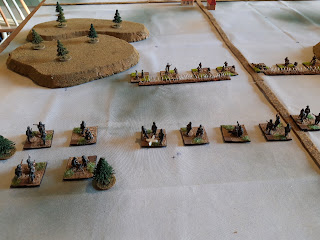 Two more VGD battalions over of the left. One of them is deployed in a double line. Faster and more manouverable but generates less firepower. All the units on table at the moment are green, so generate less firepower and break on three hits. 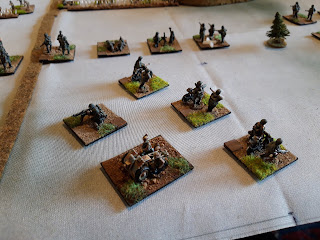 The 277 Fusilier Battalion. These guys have bicycles (not much use in the snow!) and have an attached infantry gun company. They are rated as competent. Normally they'd break on four hits, but the attached company makes if five. 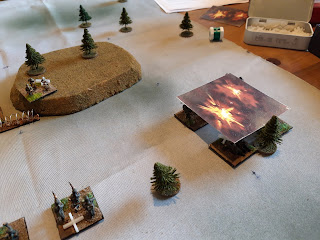 Ooops. It turns out the US have some artillery support. The 99th was very short of ammo so this particular firing battalion only has two fire missions. It does hit every single stand under the template though... 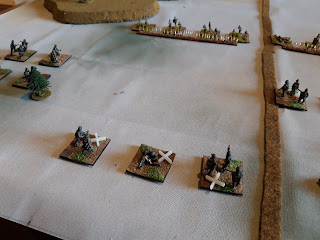 The dug in US troops are proving a hard nut to crack and one VG battalion breaks and retires, losing a base in the process. 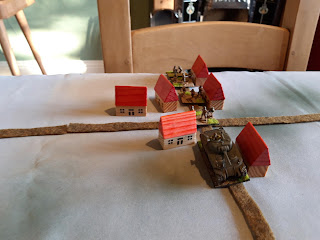 A battalion from the 2nd Div arrives in Krinkelt. These guys have an attached Sherman company and are rated as Competent. 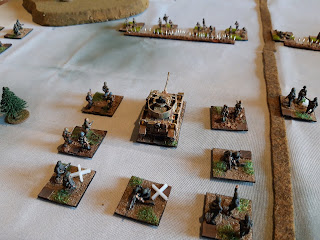 The Germans now commit a KG from 12th SS Panzer Div. A battalion of panzergrenadiers with a company of Pz IVs in support. These guys are experienced and have a base morale of six! 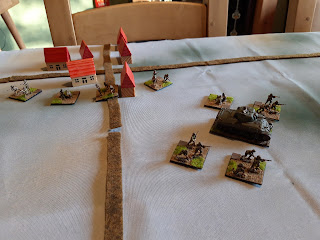 A third battalion from 99th Div turns up and forms  line on the edge of the town. The 2nd Div Combat Team forms double line and heads off for the more open northern flank. 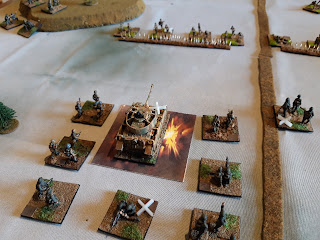 Unsurprisingly, US artillery lands on the SS, suppressing the tanks. The routed VG have been busily rallying (so they are down to only one hit now). 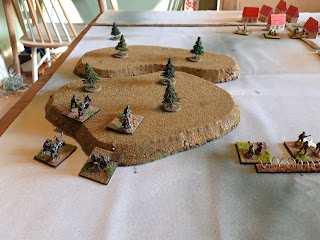 Some sneaky VG head into the forested hills on the US right. Slow going in the difficult terrain. 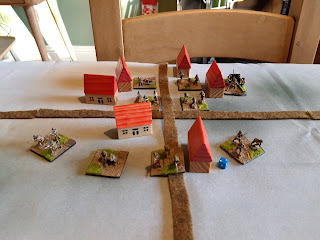 Another battalion of 2nd Div turns up, these guys have a towed tank destroyer company as well. With them they also bring a much better supplied artillery battalion in support. 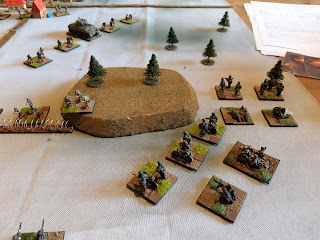 A bit of a stand off on the German right. The VG have sorted themselves out after being stonked and the Fusiliers are forming up to assault the US line. 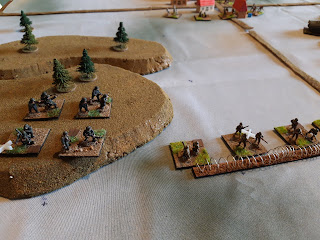 Over  on the left, the VG are spotted in the woods and US defensive fire suppresses a base. Unit commanders can choose who gets hit, in this case the German weapons company (which isn't deployed in any case). The US are allocating hits to their rifle companies and their weapons company gives a defensive bonus in assault. 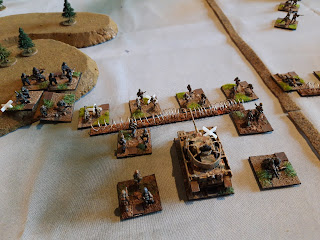 The SS Panzers come crashing in, although the Pz IVs are still suppressed and their MG company is undeployed. The VG assault the US flank. The US already have two hits and one more will break them 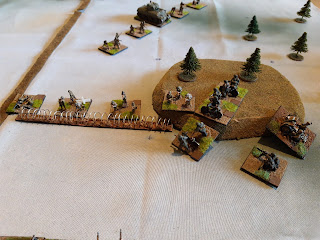 The Fusiliers assault the other US battalion in the flank. At this point I decided that units should be more clumped together (easier to keep track of what was where). Units in line can still extend if they wish. The Germans are manhandling their deployed MGs and infantry guns forward. 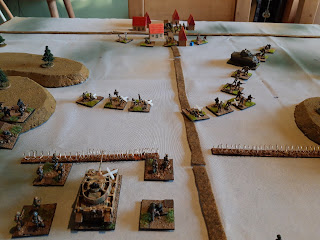 In the face of the concentric assault, both US battalions are finally routed, but they've done a sterling job, delaying the German advance for seven turns. The newly arrived troops in Krinkelt start frantically digging in! 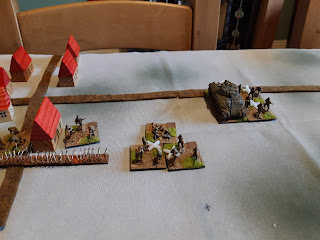 Left exposed, the 2nd Div Combat Team is also routed. I forgot to take any photos of that bit. The routed units stop around the village and try to rally off hits. One of the village defence units has managed to dig in. 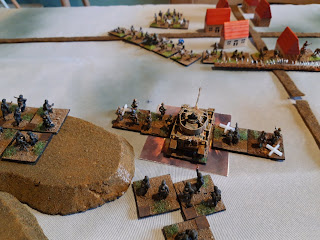 The Germans spent a few turns rallying off hits before resuming the advance. The SS ran into withering defensive fire and more US artillery which suppressed three of their infantry stands. 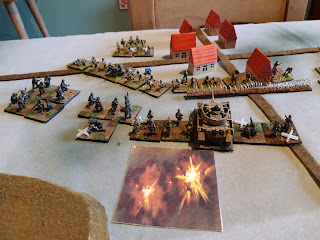 The Germans advanced through the barrage. The other 2nd Div team had formed line but didn't have time to dig in before the German attack. 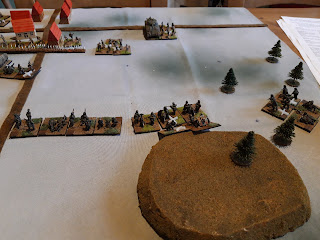 Over on the other flank, the VG sorted themselves out, rallying off hits and limbering up their support weapons. 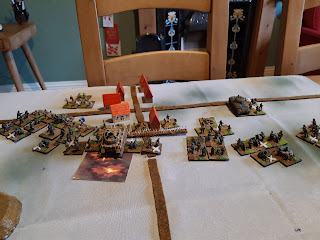 The Germans launched a mighty assault all along the front.

The VG were repulsed, both battalions breaking. It was up to the SS now..

The weight of US fire was too great and the SS were already disordered so they too were thrown back. 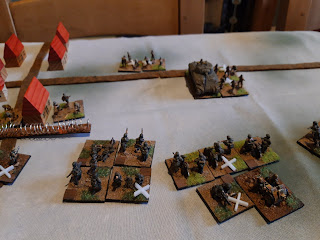 Over on the other flank the Germans closed in as US defensive fire tore into their ranks. 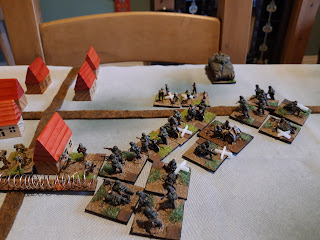 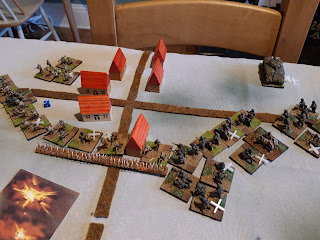 But the assault on the newly dug trenches in front of Krinkelt failed and at that point the game ended just as the route to the crossroad was open. The US had pulled it off, at huge cost.

That wasn't too bad, a reasonably historical result and manageable enough that I could run the whole thing myself in a couple of hours. There were some slightly creaky bits - I need to figure out if it is worth differentiating the battalion heavy weapons companies and I also need to sort out some issues around hit allocation within units. I'm not convinced this is the way forward though.