Avid readers my recall last weeks post covering the continuing Lodz campaign here. We had to terminate the game halfway through the second day, which was a bit unfortunate. In the current Covid19 lockdown, there aren't any opportunities for f2f play, so after the success of Tims Stalingrad matrix game (reported here), I thought it would be an interesting experiment to try and run the last few turns of the game over Skype.

Just to refresh everyones memory, the engagement had ended with German XX Corps well dug in against the Russian IInd Corps barring the rail line to Lodz (off table to the left). 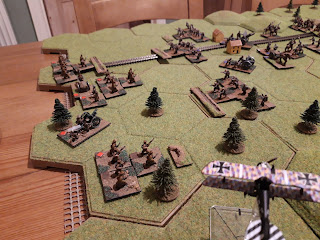 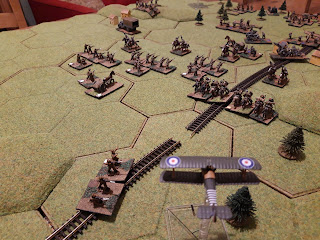 But sadly the Russians' Lowicz Group had pushed rapidly westward across and was now threatening the German rear, delayed only by the heroic German 6th Cavalry Div having wiped out the brigade from 1st Reserve Corps standing in their way. 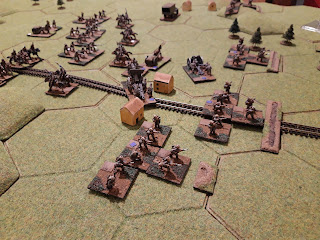 This left the poor old Germans in a bit of a vice, as the leading Russian brigade was actually adjacent to the German Corps HQ!

I set the game up on the dining table, and then spent some time experimenting with the camera on my Samsung tablet to find the best viewing angles. In the end, putting it on an old shoe box about six inches from the end of the terrain gave the best view.

Then I realised that with the camera running in full screen mode, it was going to be very hard to run the game while communicating with the players, so as a backup I also enlisted the help of my laptop and phone. I set up a Skype group for the game with all the players in, then kicked off a group call. It became apparent very quickly that the comms wasn't going to work,  I ran the camera session from the tablet as one Skype call, and dialled in from my phone.

That was when the feedback started, so I had to mute the Skype session on my tablet, and I used earphones with my phone to damp out any background noise which would also cause feedback.

We were finally up and running! I basically just asked the players to tell me what they were doing, and I moved the toys and rolled the dice. Simon and Tim C reprised their roles as Russians, while Tim G filled in for John and the German side with Jerry. Johns microphone hadn't arrived when we ran the game. 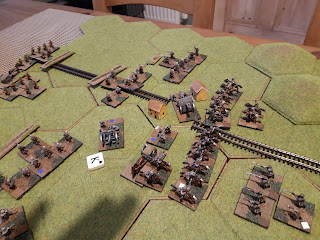 The action opened with lots of cavalry combat. The German 6th Cavalry Div dismounted and got their rifles out, to defend the German HQ. The Russian cavalry charged on the right flank, trying to overrun the German 150mm howitzers in Strykow.


I had chosen an OP14 game as each formation activates in card order, which made it easier to adjudicate what each player was doing. I've done a lot of big group video sessions at work and you need to be more disciplined about who speaks and when. 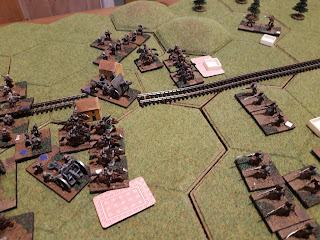 The Russian infantry managed to push back the German cavalry, but in turn they were shelled by the German field guns and driven back with some losses. This Russian brigade was now reduced to 50% strength and incapable of offensive action until reinforced. The German cavalry, artillery, HQ and LOG train were now all stacked up together however.

One issue which was become apparent quickly was map orientation and unit location. It was very hard for the players to know where stuff was and where it needed to go as there was not grid marked on the table. I ended up moving the tablet around a lot to focus on bits of the battlefield, which was a bit tricky while also holding a phone and trying to throw dice!

I think I'd imagined the players giving me their general intentions and I'd interpret it, but instead we moved each unit hex by hex as if we were at the club. I should have made a compass rose or similar. 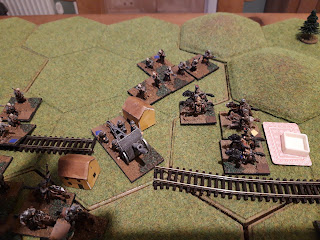 The Germans responded by moving a brigade across to secure the northern flank of Strykow. Their eastern line was now looking more secure, with an infantry brigade, the entire Corps artillery and a cavalry division facing the Russians. The Russian cavalry have their first exhaustion card as they are at 75% strength, as does the 6th Cavalry Division. Cavalry are quite fragile. 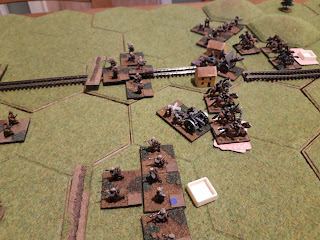 Disaster strikes in the German centre. The Russian IInd Corps artillery fires counter battery on the German field guns, also catching the German cavalry and German Corps HQ in the barrage. The German guns are hit, the cavalry loses a stand and the Corps HQ is dispersed for the rest of the day. That is probably the most effective OP14 barrage I've ever seen. Oh dear.

Things are suddenly not looking too good. 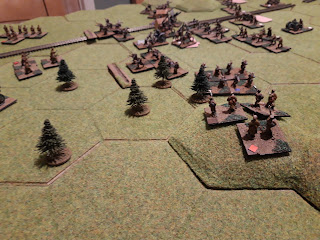 Down in the south, the German detached brigade is busily marching northwards to regain contact, pursued by a brigade from Russian IInd Corps. The loss of the HQ puts all the German units out of command and this brigade dithers, allowing the Russians to catch up. By massive good fortune (the Russians didn't score any hits at all!) the marching German column survived unscathed. 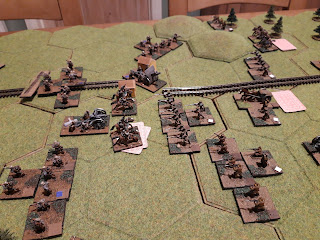 The two fresh brigades in Lowicz Group pushed westwards, up against the German cavalry and fields guns. 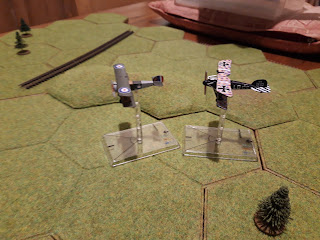 While the German planes chase the Russian ones. Yes, I know it isn't 1917, but these the only planes I had... 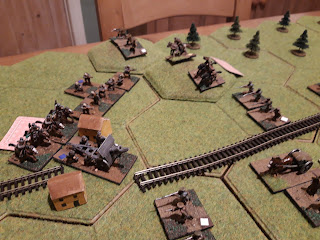 The Russians try to envelop the German flank in the north and pin the Germans down there. The battered German cavalry retire into the village with the howitzers. The weak Russian units in the north are all at half strength, so unable to attack. However they can exert a zone of control with their MGs and rifles into the adjacent hexes. 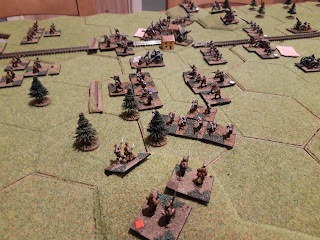 In the south, the lower German brigade deploys, but the Russians have pushed up behind them, covering their retreat route with MG fire. Russian IInd Corps chooses to dig in rather than push up in turn, leaving something of a tenuous corridor... 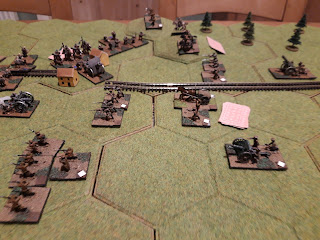 By now the Lowicz Group has amassed a pile of exhaustion cards (one for each loss over 25%) but is still going strong. Their artillery has now caught up. They have advanced 20km in two days, which for 1914, in winter, isn't bad at all. 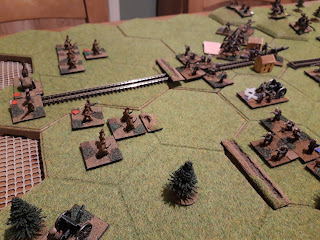 As night falls, IInd Corps is still holding the outskirts of Lodz, but hasn't pushed up quite enough to close the gap in the north, so the Germans will be able to pull back.

With that,we ended things. It was surprisingly close to the historical result as in the real battle the Rusians captured Galkow (the southern village) but the German XX Corps ended up a hedgehog around Strykow in the north. Both Russian corps are close to exhaustion but the overnight phase will allow some losses to be recovered, while the German XX Corps is almost unscathed apart from its field artillery and HQ. In any case, a creditable effort by all the players, I really thought XX Corps was going into the bag, but the Germans managed to pull together and effective defence at the last moment, despite Tim Cs excellent command of the Lowicz Group.

In real life, this battle left the XXV Reserve Corps, 3rd Guards Division and Von Richtofens cavalry corps cut off further south, so we shall see what happens to them in future instalments.

I certainly learned a lot about running online games. For the next one, I'll have a think about a better organisation of the map and comms. Yes, we could use a virtual tabletop, but I'd rather play with toys.  Many thanks to the players for tolerating the moderate chaos at times.

I've also learned a lot more about Skype. Just how many new collaborations tools will I have to learn in the current crisis? At least at work we seem to be standardising on just a few now.