On we go with the battles of the Lodz campaign. Avid readers will recall the first battle at Kutno, as recorded for posterity  here.

So, the Germans have encircled Lodz and XX Corps is facing west maintaining the siege in contact with Russian IInd Corps. 1st Reserve Corps and 6th Cavalry Div are maintaining a screen to the east, all to cover the the lines of communication of the German infantry and cavalry corps operating further south. Only a single brigade of 1st Reserve Corps is present, the rest are in an arc off to the north.

The Russians have meanwhile assembled a counterattack force around Lowicz to reopen communications to Lodz and isolate the Germans further south. Off we go to Poland, one wet and cold day in late November 1914.

We ran this using OP14 on my Hexon terrain with 15mm toys. 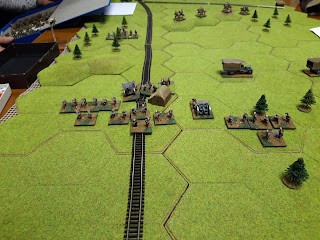 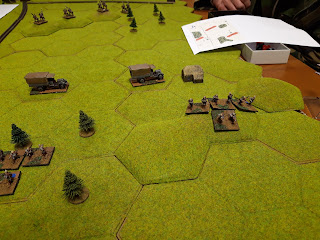 This brigade was detached further south covering the road through Galkow. Lorries can be seen in the distance. 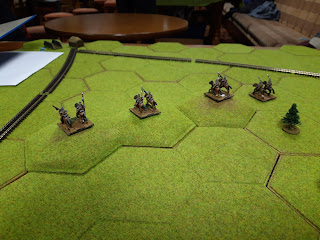 6th Cavalry Division in a screen facing east. John took 6th Cav and the single lonely brigade from 1st Reserve Corps. Lowicz is dimly visible in the distance, 8km away. 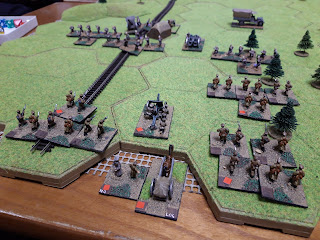 The Russian IInd Corps appears from the west, with a lot of lurking in the woods. Simon was in command here. This Corp is quite weak, certainly not strong enough to take Strykow on its own. 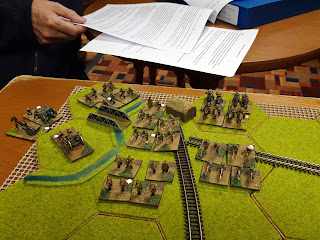 The rather stronger Lowicz group rolls on, commanded by Tim C. They also have a cavalry division. These all came marching on in fine style. 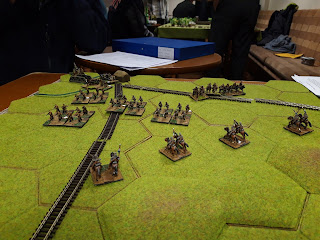 6th Cav pushed forward its screen tl slow them up. The Russian cavalry deployed from march into a tactical formation. 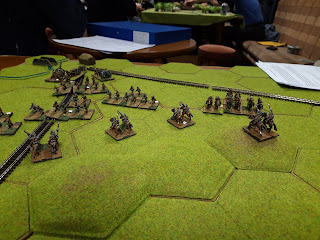 And pushed back some of the German cavalry while the Russian infantry deployed into combat formation. 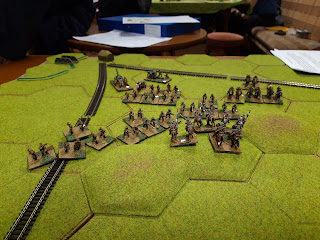 The German cavalry formed up into combat formation as a tide of Russian infantry (some 25,000 of them!) rolled forward on a 6km front. 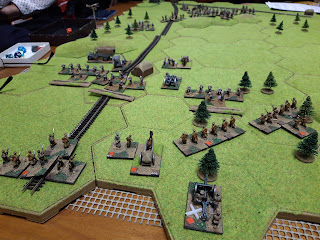 Things weren't going so well for IInd Corps as they pobed the German defences, suffering losses from German artillery fire. The German HQ rapidly evacuated Strykow when it came under area fire the Russian artillery though. 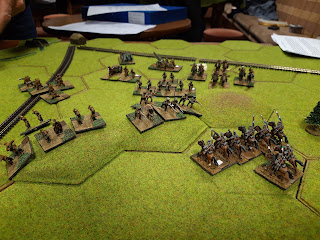 The Russians shelled the German cavalry who fell back as the Russian infantry followed up. The Russian cavalry meanwhile dismounted and set about deploying their MGs. What were they up to? The Russians were now firmly in control of the ridge. 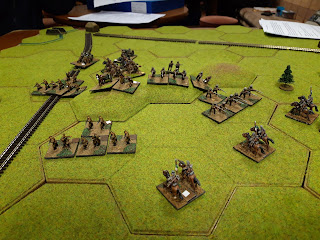 After this success the Russians pushed on relentlessly. It really was a Russian steamroller. The German cavalry shook out into a screen again, while the Russian cavalry remounted and rapidly changed flanks. 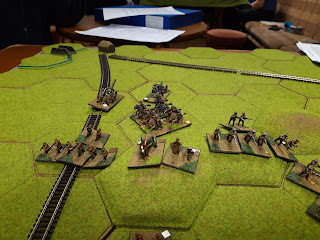 They came up behind the Russian HQ which had a nice view from the ridge. The weather cleared up in the afternoon but the airforces of each side added little to ongoing action.

Night fell shortly after (the days are short in Poland in November) and both sides reorganised. The cavalry fell back to water and feed the horses, and the infantry frantically reinforced their hasty trenches while some losses were recovered. 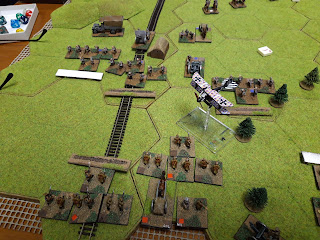 The day dawned bright and clear and German airforce was first to respond and a spotter plane called down fire on the deployed IInd Corps, braving a hail of Russian MG AA fire to do it. (Yes, I know it is an Albatross, but Tim G wasn't around to bring his early WW1 planes). The unsightly white trenches are temporary ones which weren't built up overnight. I didn't bring my other trench markers. 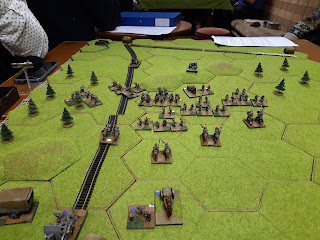 The Russians are suddenly getting very close to the XX Corps rear areas, despite the best efforts of 6th Cavalry Div. The leading Russian brigade is only 4km from both XX Corps logistics train as well as the critical supply route leading south. 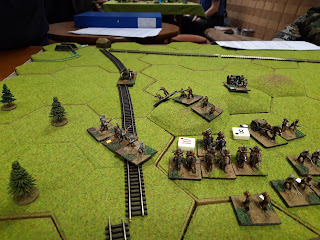 1st Reserve Corps decides it is time for a heroic sacrifice to slow up the Russian juggernaut. Its lone German infantry brigade leaves its nice snug trenches and attacks the flank of the Russians. The Russians don't have any artillery or MGs deployed as they are busy marching forward. To everyones amazement, the Germans succeed in pushing back the Russian flank guard, although taking some losses in the process. Iron Crosses all around! 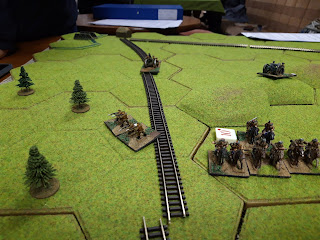 The Russian respond forcefully. Every gun in range unlimbers and plasters the Germans, and the Russian infantry counterattack, causing enough losses to break the surviving Germans who turn tail and run. The Russian brigade is reduced to 50% strength in the process. 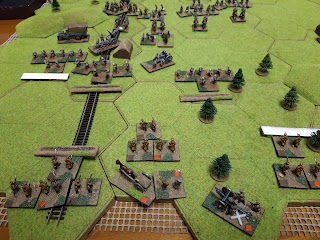 The Russians continued to press forwards, they've actually got units next to the German supply train and they are only a couple of km from the German artillery positions, who are rapidly turning around to face the oncoming threat. At this rate XX Corp is going to go into the bag as only 6km seperate the leading elements of Lowicz Group and IInd Corps. 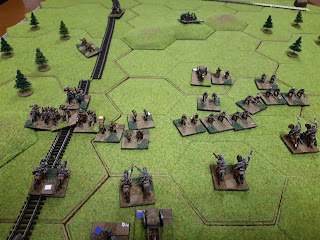 The Russian steamroller pressing up against 6th Cavalry Div. Sadly we had to call it a day at that point as the Manchester-Sheffield Wednesday football match promised gargantuan traffic jams and various people dived for the lifeboats. Jerry proposed that perhaps we could set up these positions and finish it off (hence the detailed photos of where everyone is) but we'll see. 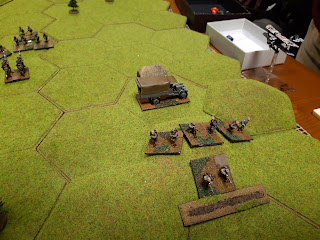 XX Corps detached brigade are still dug in covering Galkow from the west, apparently oblivious to all those Russians behind them.

Historically the Russians captured Galkow, diring a corridor through to the encircled Russian troops in Lodz.  XX Corps fell back to the north but retained a hold on Strykow. All the German troops further south were cut off however, which posed something of a problem for von Mackenson