John laid on a Star Trek type game using his Planetside Sci-Fi skirmish rules. The USS Illustrious had detected an anomaly in the space-time continuum and went to investigate, but some wicked Space Goblins were also interested in the mysterious artefact. Jerry took the goblins, and myself, Tim and Tom the plucky Federation. 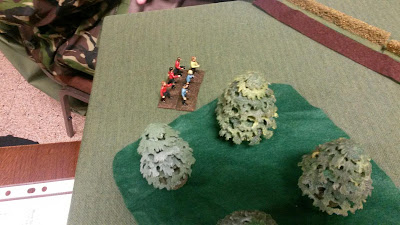 As is traditional, the entire bridge crew beamed down, accompanied by some red shirt security guards. This did not go very well as hordes of Goblins emerged to gun down the red shirts. 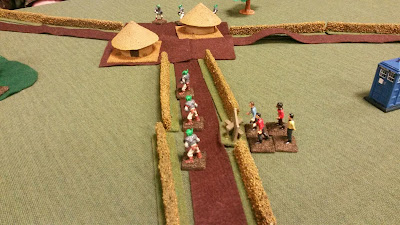 Another party beamed in behind the Goblin firing line. This also didn't go very well as the tightly clustered target came under fire from rocket launchers. 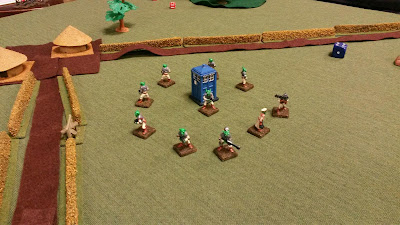 The goblins formed a hedgehog around the mysterious artifact. 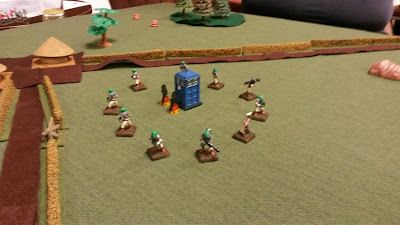 And despite (rather limited) planetary bombardment, stayed there. The artifact did not like being bombarded and disappeared making a strange grinding noise.

Well, that could have gone better. In fact we should have done almost anything apart from what we actually did, which was essentially to conduct a 'helicopter assault' into a hot LZ - with the bridge crew of the Enterprise. Maybe try scanning the area for life forms first, perhaps talk to the goblins, maybe beam the goblin commander up into the brig, maybe show them what 'kissing' is...

Oh well, that is that happens when you approach a scenario with 'wargame' in mind. I'd really like to try this again, and approach it with more of a Star Trek mindset. Lovely figures from John, which sound like an appalling ballache to put together.

I already have a couple of  Peter Pig 1/100th 75mm infantry guns, but they are done up in late war colours and I felt the need for a few more suitable for the early and midwar period. I picked up one of the (astonishingly good value) PSC German heavy weapons boxes which includes four 75mm LeIG with a number of options including the Gebirgsjager variants. 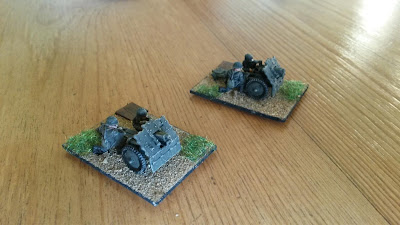 I only made up a section of two in the standard tyred configuration to start with as I may want to make some spoke wheeled ones in future. Here they both are, lined up to provide fire support from the dining table. 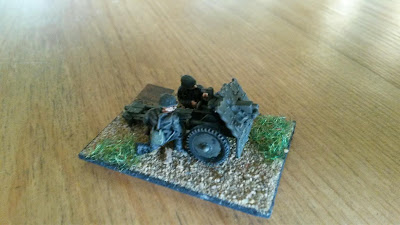 These are beautiful, crisp models with loads of detail, and unlike metal guns, are really easy to stick together. I hate assembling metal guns, I wish they were all made of plastic. 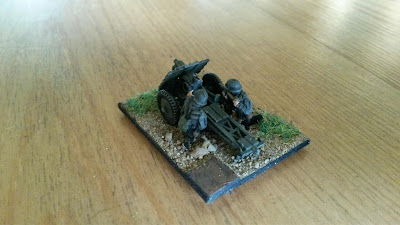 I just did them with a couple of crew as these guns are tiny. I was fortunate enough to handle the real example at Shrivenham, and I'm not sure I could crouch down behind the miniscule gun shield. 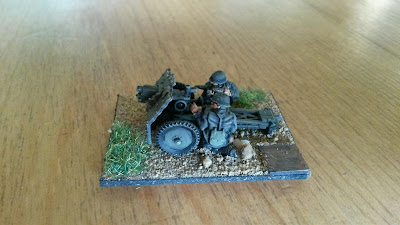 The crew are from the figures included in the box, I just did a gunner and loader. For plastic figures these have quite deeply moulded detail, which takes a drybrush very well. The helmets are a little squashed, but at normal gaming distances this isn't noticeable.

I'm never really sure what colour to paint early war German equipment, I used to paint mortars, guns etc faded panzer grey but the Shrivenham LeIG is done in RAL 6006 (Feldgrau) so thats what I did these in. I rather think an 88 or 105 would look a bit silly in RAL 6006, but these look ok, and with a bit of a dust highlight, it all sort of blends in anyway.

I really can't recommend these highly enough, and as with all the PSC heavy weapons offerings they are astonishing value and very high quality, at least compared to their metal counter parts. If only Zvezda did their guns in 1/100th too, I'd be a happy bunny.
Posted by Martin Rapier at 05:31 No comments:

John put on this interesting medieval skirmish game using Jim Wallmans Men at Arms 'one brain cell' rules. It was a complex multi-player featuring myself as the Sheriff of Mansfield and Graeme as the local Reeve of the Manor upholding the peace against a distinctly dodgy looking  band of outlaws led by Jerry.

Messing things up for everyone was local dignitary Sir John Bassett who had invited the King to go deer hunting. 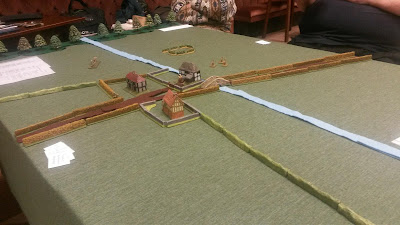 The field of strife. Jerrys outlaws were supposed to be up to no good in the vicinity of the mill. Some deer are grazing peacefully in the distance. 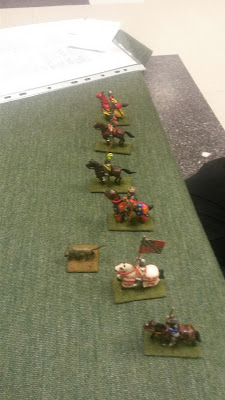 The Kings hunting party comes thundering, oblivious to everything else. A large hunting dog is in attendance. 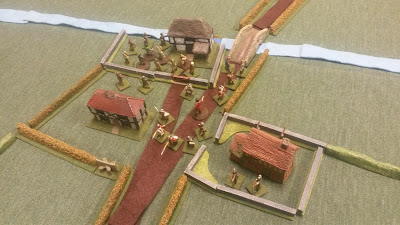 Meanwhile, in the village my chaps and the Reeves men mill around. I suppose if we were trying to lure the outlaws into a trap, this was probably not a good idea... 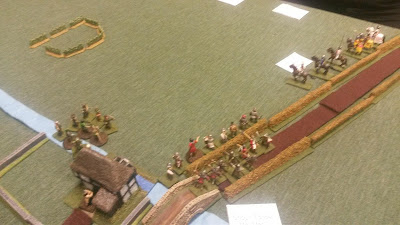 After a while we figured out where the outlaws were and formed up outside the village. The white cards are order chits for the leaders. They can only issue very simple commands, the main one being 'follow me'. 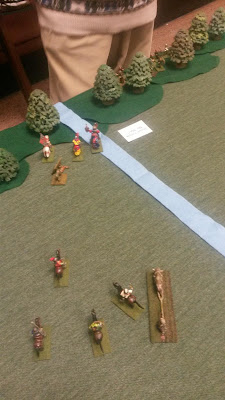 Over on the edge of the forest, the outlaws have shot some deer and hope to grab the carcass before the knights can intervene. 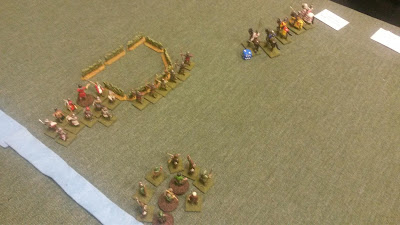 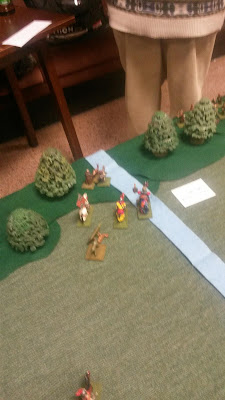 By the skin of his teeth Friar Tuck manages to grab the deer and make it back in the forest while the knights look on.

This was really good fun, and the command system worked extremely well. Only being able to do one 'action' per turn meant the leaders had to really focus on the important things and the forces of law and order probably spent far too long sending each other messages to try and co-ordinate our forces. Even though not a great deal 'happened' it felt very busy and there was always stuff to do. I'd recommend the system to anyone, and many thanks to John  for putting on such a pretty and enjoyable game.

Pull up to the Bunker..

With huge apologies to Grace Jones for the post title....

I was sorting out some stuff I needed for a game recently and reflected on the large number of times my fortification terrain pieces have been used. Although I have plenty of trenches, barbed wire, pillboxes, dragons teeth etc one thing I'm lacking is actual bunkers, either of the shelter type or the artillery variety. On occasion I've even had to borrow bunkers from other people, oh the shame! So given the amount of re-use I get from terrain items, I thought I'd finally knuckle down and make some. 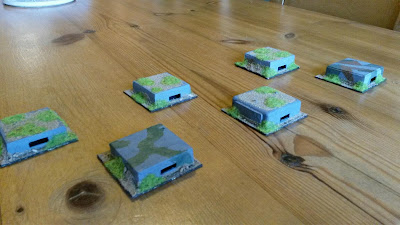 The mini-Maginot Line takes shape. The finished bunkers all lined up. 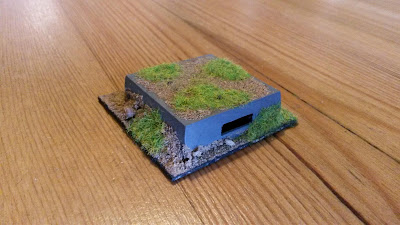 They are modelled on crude versions of WW2 German beach defence bunkers, albeit minus the extra concrete arms protecting the embrasure. Most of them I did as partially buried with the sides built up and some earth and grass on the roof. 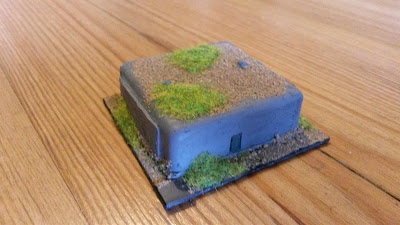 At the rear, they all have a small door so attacking infantry don;t necessarily have to try and climb in through the gun slot. This example also has some air vents on top, made from Brodie helmets cut off from some spare Emhar WW1 British figures I had. 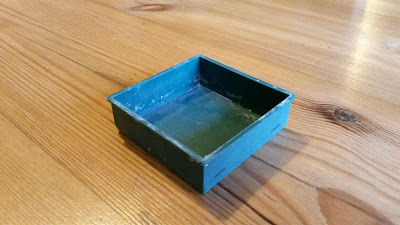 They all started life as one of these, a plastic end piece from a roller blind container. I have accumulated a fair collection of these over a number of bedroom renovations, and I picked a bunch of the more reasonable sized ones (approx 50mm each side). They were stuck down on 60x60 bases and textured with PVA, sand and static grass in the normal manner. 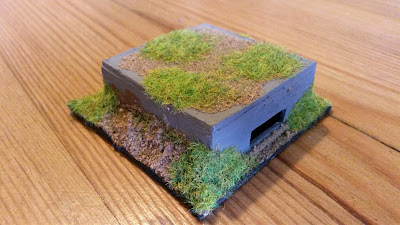 Some of them were very deep, so I cut them in half horizontally with a razor saw and made up new roofs from mount board, you can see the roof on this one. The embrasures were also cut into the plastic sides with a (very) sharp knife. To cover up the plastic-ness of them (and gaps in the roofs and walls), I slathered each in a thin layer of flexible builders filler, which also produced a pleasing concrete texture. 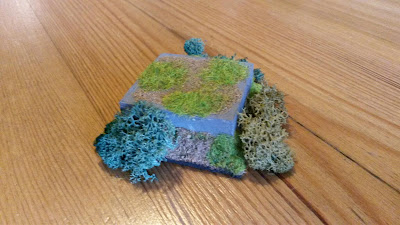 To be used as shelters, the intention is to cover up the gun embrasure with lichen, as above. 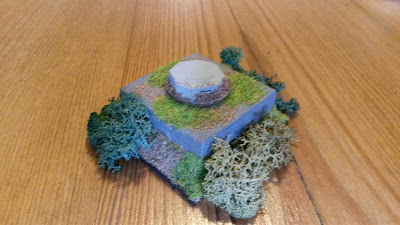 And by placing a pillbox on top, they can be used as sheltered observation and command posts.

For an afternoons work and minimal expenditure, I was pleased with the results, and I can think of a number of scenarios where they will come in very handy, so I'll have to plan some games to make use of them.
Posted by Martin Rapier at 08:53 5 comments: