Say what you like about Battlefront (and I often say a fair bit, especially when looking at the price tag or trying to stick them together) some of their models are really nice, and this Sdkfz 231 is one of them. I wanted something for the heavy platoon of my early war armoured car company, and this just the ticket. I was particularly pleased to pick this up cheap from Caliver, rather than paying the usual eye watering BF price. 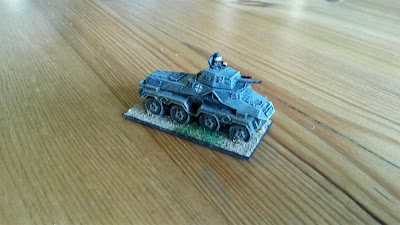 A lovely crisp model which sits really well and has lots of sharp edges and raised detail. The commander is supplied with a moulded on open hatch (or there is a closed hatch too). 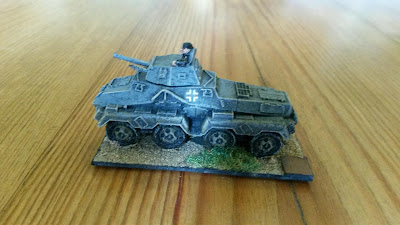 The wheel assemblies are separate castings, as is the gun/MG assembly for the front of the turret. I had to trim the latter down to make it fit but the wheels went on without any problems. As usual I had to hold everything together with blu tak while the superglue dried. 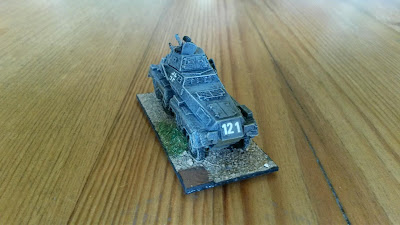 Rear view, the hatch details is very nice. The model was suplied with the wierd snow plough thing to go on the front, but I couldn't see any human way to fix it without pinning, so I didn't bother to put it on. There are plenty of photos showing them without.

It pretty much painted itself, just a heavy drybrush of panzer grey and a light overall dust finish. I went for fairly minimal markings, but added some numbers so it could stand in as a command vehicle. I'd originally planned to put them on the turret, but I didn't fancy putting them on over the vision ports. At some point I'll do the numberplate, but that is good enough for now.

Posted by Martin Rapier at 00:07 No comments:

As we are doing armoured cars (see last week), these are my venerable QRF 15mm Sdkfz 222s. Purchased some considerable time ago. 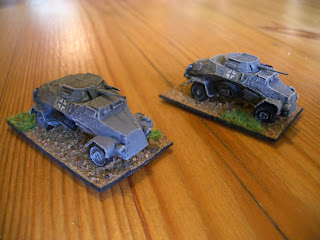 I got two. Well you have to really don't you. 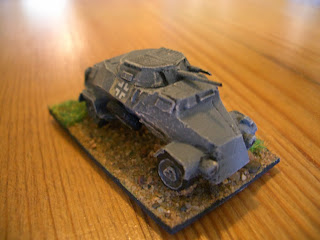 These are decent castings, albeit perhaps a bit dated now. Not sure if the moulds for these have been redone. You just need to stick the wheels on and job done. 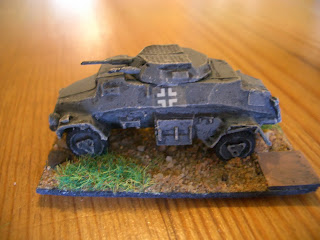 These versions have the wierd trangular hubcap things moulded on. 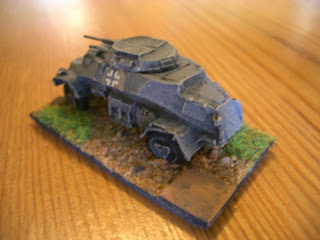 Lots of angular surfaces pick up the drybrushing well.

So there you have it, nothing spectacular but good solid models and I've actually used these two a fair bit over the years. I just did them plain panzer grey with minimal markings and a lighter grey highlight with a very pale tan 'dust' finish. If I had one criticism, it would be that the turrets are a bit flat, but otherwise they look the part.
Posted by Martin Rapier at 09:13 No comments:

Some months ago, I had a donation to my 15mm forces from Tim, some Forged in Battle Sdkfz 222s. I've never had any FiB stuff before, had a look at them at shows a few times, but they never really seemed to have anything which I didn't already have in quantity anyway and all their stuff seems to be in multi-pack blisters.

Anyway, I had been thinking about a certain lack of armoured cars so these came along at a timely moment. Having left them to stew for a suitable interval (umm, it may be well over a year), I set to work. 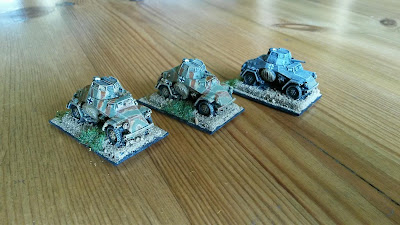 These chaps came in a pack of three. Nice crisp resin mouldings with metal turrets. The spare wheels are moulded with covers on, which provides a bit of contrast, particularly on the grey one. 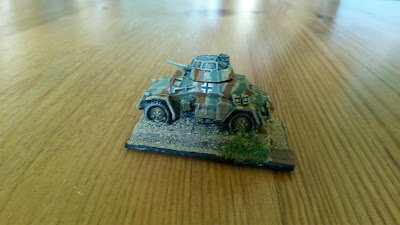 A slightly closer look at the side.  The shovel stands out very well and the jerry cans are moulded on. The only fiddly thing was seperate metal guns to stick into the turrets, which I had to hold on with Blu Tak while they dried. 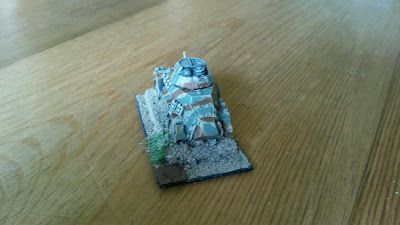 Rear view. The turret crew come moulded in, which is a nice touch. One them them is wearing goggles, you can see the strap on his helmet. One thing evident in this picture are the pre-moulded bases, which unfortunately mean the models end up standing on little rocky hills. I could have just used those, but I prefer to use my own base sizes. Just something I'll have to live with. 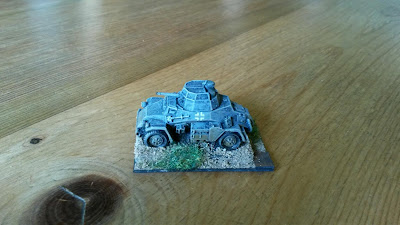 I did one in Panzer Grey to go with my QRF Sdkfz 221s. The other two are done in the same scheme as my Sdkfz 2341/1s so they can join my late war panzer recce battalion. My early war panzer recce Bn is still short of Sdkfz 231s, but more on that anon. Didn't have any problems with painting them, the resin didn't seem to be greasy so I just painted right over it (I wonder if it isn't resin but that plasticised plaster the Timecast terrain is made from? the texture seemed very similar).

So there we go. These are nice little models which I'd recommend to anyone, the only thing to watch out for are the pre-moulded bases. If you want bulk purchases, they are relatively inexpensive, certainly compared to BF, and I have a project in mind where their truck packs may come in quite handy.

Posted by Martin Rapier at 12:15 No comments:

A trip to the British Museum

I recently had a trip to London, and in between appointments, managed to squeeze in a couple of hours in the British Museum. I headed for the Roman, Greek and Medieval galleries, and I'd forgotten quite how amazing a lot of the exhibits really are. I've also managed to forget who some of the assembled Roman nobility below are, but hey ho. 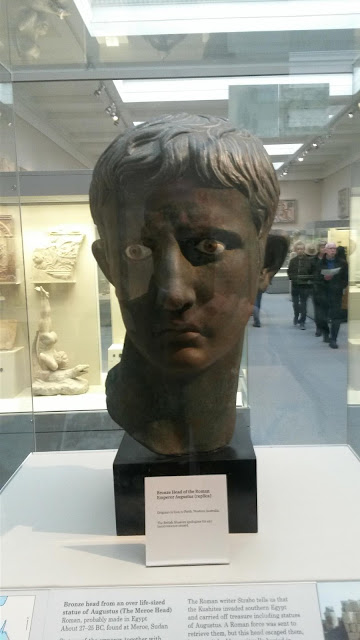 This is a magnificent bust of Augustus (I think!). 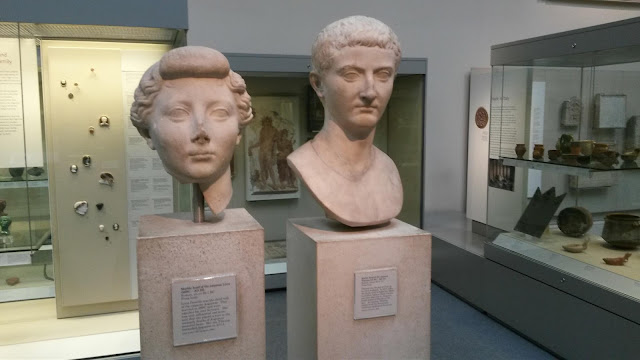 Livia and Tiberius. She looks much more like her incarnation in the more recent 'Rome' TV series here than the interpretation in I, Claudius. 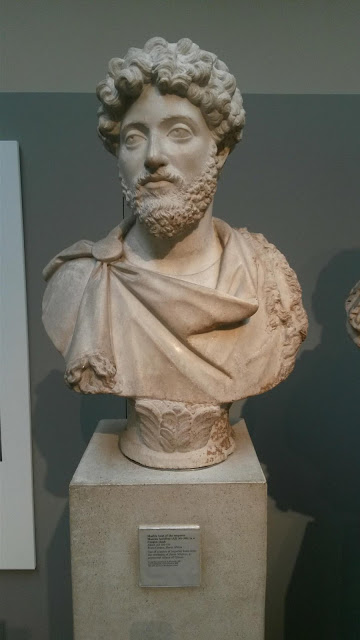 Marcus Aurelius. Who doesn't look anything like Richard Harris in 'Gladiator' at all. Love the thick curly hair and beard. He'd be very at home in Hoxton. 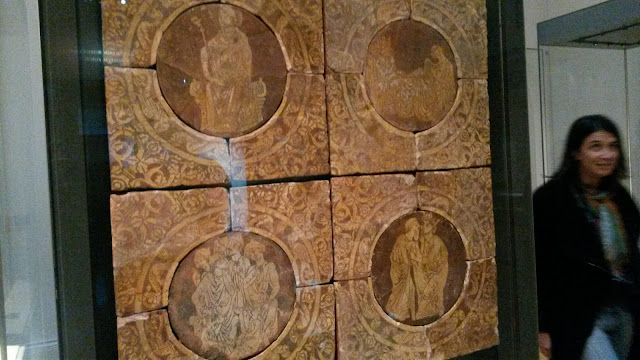 Medieval tablets telling the story of Tristran and Isolde. 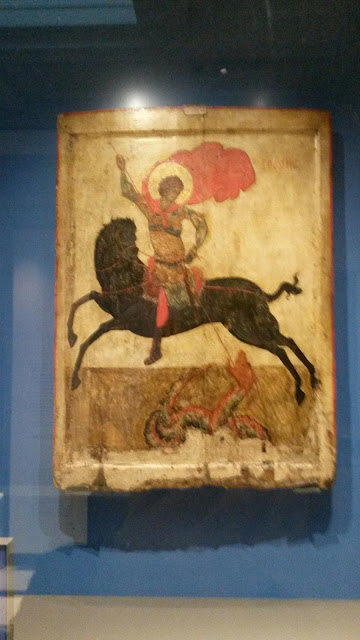 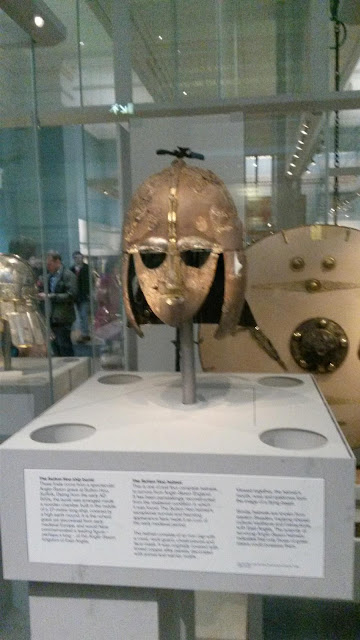 Sadly my rather dodgy photos don't do the exhibitions justice, but I was very glad I'd decided to go to the British Museum, rather than hauling down to Lambeth to look at the revamped Imperial War Museum. Save that for another day.
Posted by Martin Rapier at 09:56 No comments:

Triples has come around once more, albeit with a return to its earlier March date. I went along to help with the setup, and to run the Wargames Developments Display Team (north) game. 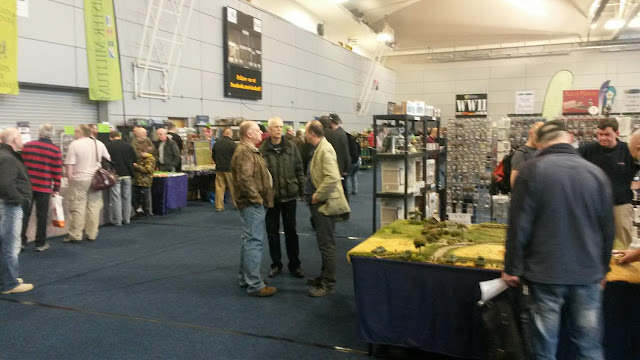 The usual mass of punters chatting and shopping. The large hall gives plenty of space to move around anyway. 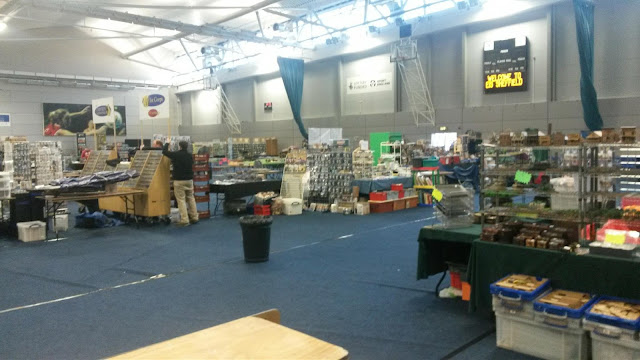 Setting up on Friday. This such an easy venue to set up compared to the Octagon. No more lugging piles of tables up tiny lifts. 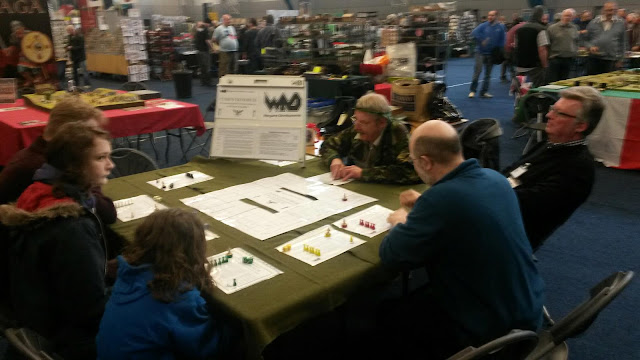 The game in full flow. This years game was Cursus Honorum, a role playing game of politics in the Roman Republic (and reported earlier on this blog). 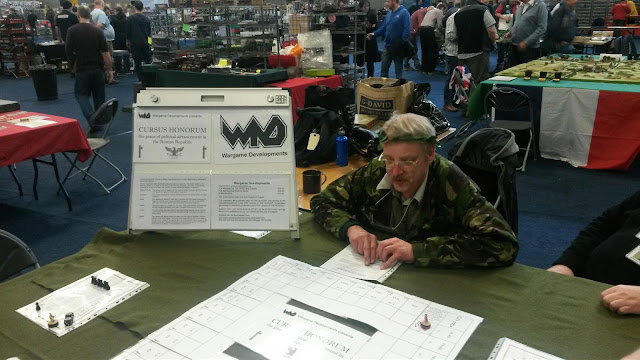 John resplendant in his wreath.

Overall the Saturday was a reasonable effort, we had a good number of takers to play the game and I managed to pick up most of the stuff on my shopping list including some amazing bargains from the Bring and Buy and a (very) heavily discounted PSC US Tank Company box which saved me about 40 quid.

Overall the show seemed quieter than previous years, and some regular traders were missing. Although March used to be the traditional month for Triples, moving back to it from May seems to have caught some people unawares and there are also three other shows in March. I gather Sunday was even quieter (I didn't attend as I was running), so perhaps a bit of thinking to do for the future.
Posted by Martin Rapier at 09:45 No comments: