This week I have mostly been recovering from last weekends shenanigans and sorting out the stuff for my forthcoming 100th Anniversary Loos game. I did however come across some photos of yet more figures recycled form other peoples collections.These are Hoplites from the collection of the late Robert Plumb.

Metal figures, no idea of the manufacturers, and which required very little tarting up.

As usual, I put them on my 60x20 25mm DBx bases, and managed to assemble/repair enough of them for five elements. A few of the figures were in a sorry state with missing bits and needed a moderate amount of work.

This batch all seemed to be identical castings, with small plumes and big cloaks.

These were more of a mixed bag, with various styles of figure which I had to mix up on the bases.

This bunch were also similar and made up an element on their own, although a couple of the spears needed replacing.

These venerable figures came via Mr Gow, and are I believe from the collection of his late friend JR.

The paintjobs on all these figures were pretty good, all I did was give them an ink wash and highlight some details after repairing the broken bits. I am sure they will give sterling service in the years to come, and I hope their original owners would have been glad to see them going on being used.

Finally....
These goats have been in my painting box as long as I can remember. They are 20mm Irregular, and I think I originally got them to to a DBx camp element. As I was fixing up the hoplites and slingers, I took the opportunity to finish these off too and did them as single based so they can be scattered around in a scenic manner. Like the slingers and hoplites above, I am sure you can never have too many goats. There are a few other interesting things in my painting box, including a maxim gun mounted on a mule. Well, maybe one day....

This weekend I've been dressing up and wandering around the woods, as I do from time to time. This particular outing was a trip to the Siege of Leningrad in early 1943, which was played at the excellent Close Action site at Grafton Underwood (an ex USAAF airbase, now heavily overgrown). I helped organise and run it, but apart from laying out the props, the game largely ran itself and all we had to do was avoid getting lost and  keep the mission timings on track.


This was the third game organised by the 900 Days group. We aim to put at least one game on a year, and they are all set on the Eastern Front around Leningrad, so people who have invested in Russian kit get a chance to use it. If you fancy having a go just sign on the  WW2 Airsoft Forum, and we've got kit to lend out for people who haven;t got any Russian gear.There is also a Facebook group, imaginatively called The 900 days.
Posted by Martin Rapier at 09:40 No comments:

A period I have been interested in, yet never taken the plunge, is the English Civil War. Mainly the same reasons as it took me 30 years to finally do WSS, I was never interested enough to do serious uniform research for larger scale figures. However, a chance purchase from Mr Gow of some 2mm pike blocks got me thinking. I already had a load of 2mm WSS foot and horse, and in this scale no-one could actually tell what uniforms the units are wearing, so coupled with a few more pike blocks.....


The elements I had were supplemented with a few/several/quite a few extra pike blocks from Irregular (and some more horse and guns, well you can never have too many can you?). Sorting out the proportions of various types was fairly easy as once more Neil Thomas had ridden to the rescue with an eminently approachable set of pike & shot rules, coupled with vast army lists. Just to be on the safe side I sorted out enough stuff to do not only the ECW, but also the Thirty Years War (also a long abiding interest) and the oft neglected Franco-Spanish War.

I based all the elements the same as my existing WSS figures, on 30x15mm bases with multiple strips of foot, horse or guns. Some elements (like Tercios and some very big pike blocks) I put on 30x30 to use as double size bases. As Neil Thomas's units have six bases (twelve for Tercios and TYW units), I also made up a load of magnetic movement trays in various denominations as the tiny elements are so fiddly to move otherwise.

For a scenario I chose Edgehill and took the terrain, OB and deployment from Richard Brook's excellent 'Battlefields of Britain'. 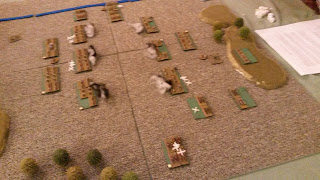 A some what blurry shot of Edgehill. The lower slopes are on the right, tributary of the river Dene at the top. Parliament on the left, the Kings Army on the right. Rupert is leading the Royalist horse forward at the very top, and at the bottom, Parlimentary horse have driven back their opposite numbers. The infantry centre is engaged in musketry.

The game was run at the Sheffield club, the overall battlefield was 80cm x 80cm (I reduced the suggested ground scale slightly as I use 30mm wide bases, not 40mm) and the armies broadly used the historical deployment although Parliament decided that their left flank was a lost cause against Rupert, so reinforced the horse on their right.


The battle folowed the broadly historical course,much to my delight. The centre engaged in a dour slugging match, with parliament gaining the upper hand due to their superior equipment, however Rupert routed the Parlament left, and promptly left the battlefield to loot the baggage! This prompted half the Parliamentary centre to head for the hills, and suddenly things looked a bit brighter for the struggling Royalist pikemen. However over on the right, the parliamentary horse won a spectacular victory over their Royalist counterparts despite being completely outmatched, and in turn they overran the Royalist artillery and also headed for the baggage. The weakened Royalist centre broke, leaving both sides utterly exhausted and with an honourable draw.

I was really rather pleased with how it went. The toys were a bit fiddly, but the movement trays helped a great deal, and the rules (which looked a bit dubious at first) produced an exciting and fast moving game which was over by a thoroughly civilised 9pm. Neil Thomas triumphs again! I wish I had his rule writing skill. For the next outing I'd like to try the Thirty Years War, but although I studied it at school and University, my memory is hazy and I'll need to do a bit of reading. Which is lucky, as I've just bought 'Europes Tragedy' by Peter Wilson. 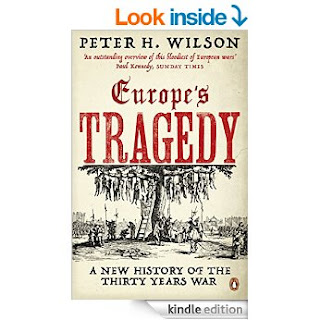