Another purchase at Triples 2016 were some Zvezda T-26s. I already have some Peter Pig ones, but I wanted some additonal ones so I can do a 1941 Tank Brigade. 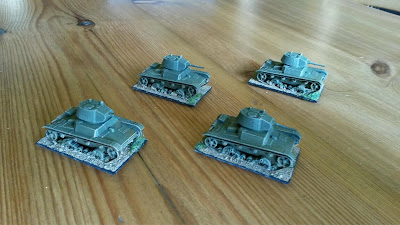 I got four of them as you can never have to many T-26s. 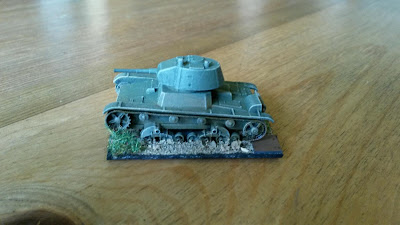 A very simple little model which goes together quickly and easily, but with nice sharp detail especially around the running gear. 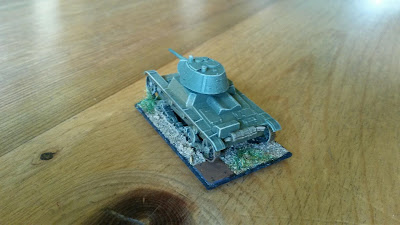 The sharp edges get picked up nicely by the dry brushing.

I was a bit concerned that they might be a different size to my Peter Pig ones (the PP Panzer IIIs are hugely bigger than my Zvezda ones), but in fact the hull sizes are identical. I should have taken a side by side photo shouldn't I! The PP ones have a different shaped turret so these make a nice contrast.

I just did these in plain Russian Green (Vallejo 894 lightened with a big dollop of ochre as it so dark), mud around the running gear and very light overall drybrush of Iraqi Sand.

The Search for Hauptmann Horn

This was a WW2 Airsoft game organised by Comrades in Arms and held in the Brecon Beacons military training area in April 2011. It covered the landing of of Hauptmann Horn aka Rudolph Hess in Scotland and was an encounter between British Home Guard and regular forces and a detachment of German paras sent to get him back. It was only the third WW2 Airsoft game I took part in, I  was a Fallschirmjager for this one. 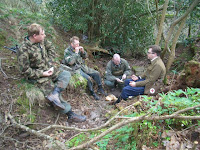 After various alarms and excursion the Fallschirmjagers finally laid their hands on Hess, and managed to evade the SS who seemed to have other plans for him. Time to hide up and have a brew before marching to the coast and a U Boat home.

This was great fun, even if it was utterly exhausting. One section of terrain took us three hours to travel a mile, but it was all very atmospheric. To cap it off, the British Army film unit made this rather magnificent film of the whole thing:

We have had a couple of outings at the club of 'Martson Less' by Tony Cullen, a very simple and abstract set of ECW rules, and I was keen to see how they worked for historical battles. We'd already tried Neil Thomas's Pike & Shot for both ECW and TYW, and frankly, they were a little clunky in places. I could see how ML could easily be adapted into a more generic approach, but I also worked up some mods to be able to use them in the Thirty Years War, particularly the earlier period with Tercios etc.

I re-used the Edge Hill scenario I'd done for the Neil Thomas rules, but reworked the OBs to use with Marston Less elements. Tim and John took the Royalists, Tim C and Tom the Parliamentarians. We played the game with my 2mm Irregular pike blocks. 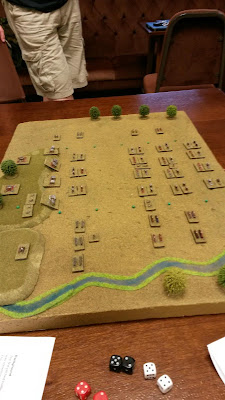 The battlefield, Royalists on the left, parliament on the right. For this scenario each element is around 500 men or eight guns, so the infantry regiments have two stands, cavalry one. ML is a grid based game, each 'line' occupying a zone, with the strength of its constituent elements. Both armies stuck with the historical deployment with Ruperts horse massed on the Royalist right and their infantry in a cumbersome chequerboard. Essex's forces are deployed in  more conventional straight lines. 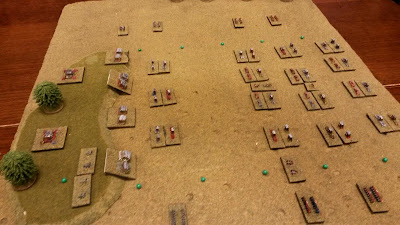 Close up of the centre. The Royalsit infantry are weaker but they have their guns up on the ridge and able to fire overhead. Troop quality for the infantry units is represented by the mix of blocks. 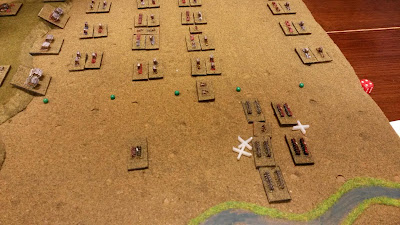 After a preliminary cannonade, Rupert charged forwards and a bloody melee ensued. At this point the first Parliamentarian line has been overwhelmed and Ruperts victorious troopers have pursed headlong into the second line. ach line can take four hits (indicated by the white crosses) before it routs. At this juncture Essex decided it would be better to attack the ridge than wait to be enveloped by the Royalist cavalry. 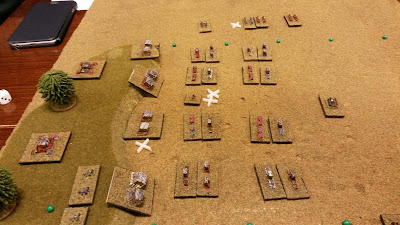 After a couple of rounds of combat, both infantry first lines were routed and the second lines entered the fray. On the flank, Rupert was victorious but failed (twice) to hal this pursuing troopers and they left the table to loot the baggage in Kineton. The Royalist second line was very weak (a single element) but managed to work its way cautiously into Essex's rear. Over on the other flank, some minor cavalry skirmishing developed. 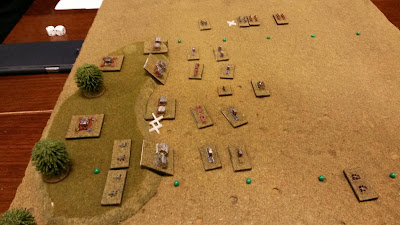 Sadly for Essex, his army broke against the ridge and the survivors streamed off the table. Historically he declined to attack, and that was probably why! So, a strategic and a tactical victory for the King, but the war will undoubtedly drag on for years to come.

I was pretty pleased how this turned out, and the players seemed to find it enjoyable despite the limitations of some of the abstractions. We rattled through the whole thing in an hour or so and I'd like to try it for the Thirty Years are next

If anyone is interested in a copy of Marston Less, they are at Staines Wargamers