After the success of Edgehill, I wanted to give the Neil Thomas Pike and Shot rules another go in a different period, this time the Thirty Years War. Although I am fairly up on Gustavus Adolphus and the Swedes, the workings of the earlier Imperial and Protestant armies have always been a bit of mystery to me, so this was always going to be a bit of an experiment.

I wanted to do something from the early period before everyone had discovered the primacy of firepower so I dug around a bit on wikipedia and came with the Battle of Fleurus in 1622. An army of Protestant mercenaries (which included the Bishop of Halberstadt) in the hire of the Dutch and en route to raise the Spanish siege of Bergen-op-Zoom. The battle was fought near Fleurus, and also quite near to Quatre Bras and Ligny, so an exciting part of the world.

Eager defenders of the faith rolled up, John and Jerry took the wicked Spanish and Tim G took the wicked Protestants. As usual played with my 2mm stuff on a few hastily assembled carpet tiles. This was the first outing for my big pike blocks and Tercio stands some of which are dimly visible in the photos. (Many thanks to Tim for the photos, the SD card in my phone died and I lost all mine). 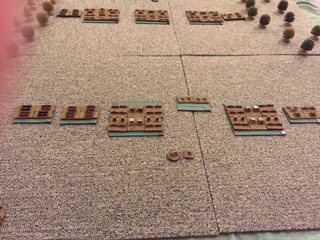 General layout of the battlefield. Protestants nearest the camera. Cordobas Spanish deployed with their flanks resting on the woods. I had to juggle the armies a bit to fit in with the historical strengths. The eight ad-hoc disorganised Protestant infantry battalions became two huge levy infantry regiments, whilst their excellent cavalry became three good quality horse units, one of which was led by the Bishop. The Spanish were a real dogs dinner and ended up with two elements of poor horse and three huge Esquadrons, one of which (incorporating the veteran Tercio of Naples) was rated as elite. 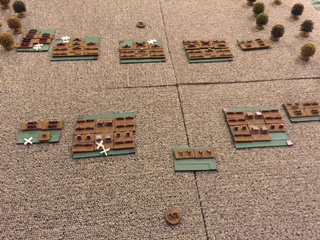 After a prolonged cannonade the Protestants moved forward and engaged in a musketry duel. This bit was quite good fun as the big infantry units packed a lot of firepower and very soon hits were flying all over the place. Sadly the Protestant cavalry discovered quite quickly that the big regiments were extremely dangerous to horsemen. 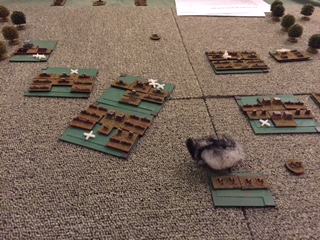 Eventually it came to push of pike and things went a bit pear shaped. A feature of the Neil Thomas rules in all periods is that units which are 'better' in close combat than their opponents get multiple dice per base, and as all the bases fight, regardless of unit depth, any advantages are compounded. The veteran Spaniards were considerably 'better' than their opponents, and ended up throwing 24 dice per regiment vs 12 for the poor old Protestants, which felt a  bit clumsy. The same thing happens in the Ancients set when Romans are fighting barbarians, it just feels a bit overpowered, particularly as the rules are aimed at armies of equal size It became fairly obvious at this point that the Protestants were going to get massacred, so we called it a day.

The problem is probably fixable. I could vary the forces sizes (historically the Protestants outnumbered the Spanish almost 2:1 but still lost!) and also have a look at how mixed units and combat advantages translate into close combat dice, possibly varying the to-hit rolls instead, but I don't want to break the basic system.

Along with thinking about rules modifications, I also had a look around at some other rules, particularly 'Marston Less' and the English Civil War Command and Colours variant, both of which would be easy to adapt to the Thirty Years War.. So, we'll head back to the killing fields of central Europe at some point, but I need to do a bit more tinkering around first. 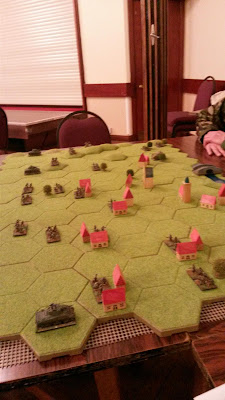 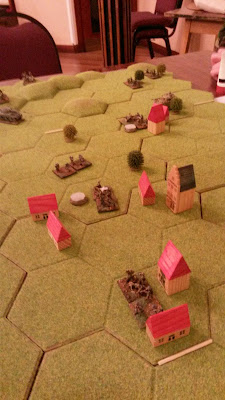 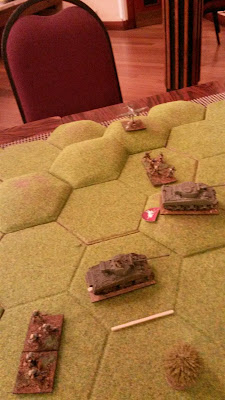 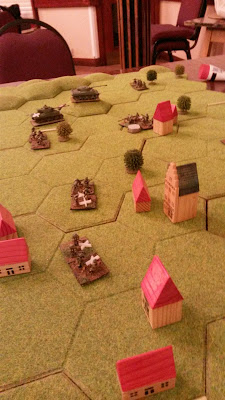 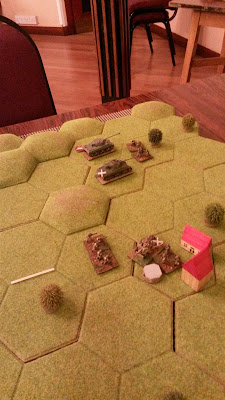 One variation I tried this time was issuing extra command cards in the intial hand (six instead of four)
Posted by Martin Rapier at 07:03 No comments: 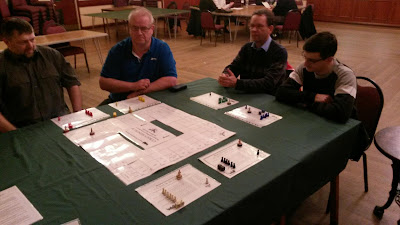 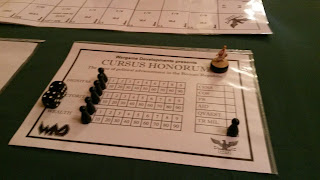 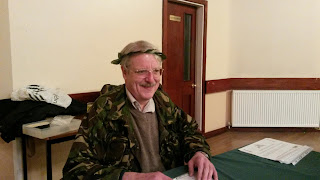 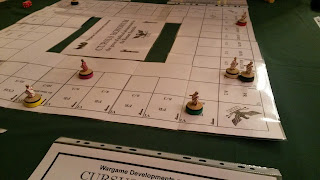 For many years I have used odd bits of felt, masking tape etc  to represent many terrain features but I came to realise that the bits of terrain I had actually made or bought (hills, walls, bridges, trees, buildings) both lasted forever and got used endlessly.  I therefore decided to tackle my river deficit, in particular in the context of my Hexon terrain.

I've already got some large 1' and 2' river sections I made out of MDF years ago, and they have featured in a number of games, but I wanted something a bit more subtle to use as streams or small rivers both on gridded and ungridded tables. 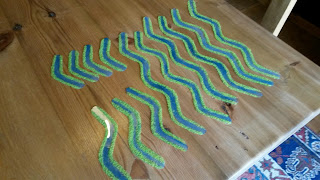 This is what I ended up with, a selection of curvy stream sections. The curves correspond with the Hexon hex edges but would obviously do as meandering watercourses in other settings. Keen eyed readers will notice that the water bits are reflective, but what is less apparent is that although they look very blue, they are also transparent, so will reflect the colour of the underlying terrain (green, brown etc).


They started life as one of these, a clear plastic box a roller blind came in. I made templates up from paper and then used them to cut the river sections out with scissors. The plastic is thin but quite rigid, so sections can be overlapped or underlayed to produce continuous river pieces.

The edges are just thin lines of static grass stuck on with PVA. Again there is some slight transparency so the underlying terrain colour shows through. 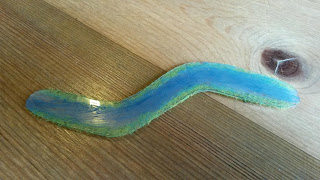 The blue hint comes from a thin wash of aubergine blue/green on the base. I first saw green river sections at COW many years ago, and it is much better reflection of weedy/deep water than pure blue. The paint also adds a bit of roughness to the bottom which stops it sliding around. The overall effect is that you get the base terrain colour shaded a greeny blue coming through as the water colour.

I was very pleased with how these turned out, so rarely a game goes by when they don't get used. My main regret is that I haven't got the mix of different lengths quite right. The 1' sections are fine for a normal table, but for more intricate hex sets, I need more of the shorter sections, so I may end up cutting some of the longer ones up.