This was a game I put on using my new 15mm French figures (and my venerable Germans) covering the offensive by French 1st Armee into the Belfort Gap in the opening days of WW1. John and Graeme took the French, Tim and Tom the Germans, while Jerry heckled from the sidelines. The game was played with OP14, which has brigades (or cavalry divisions) as the basic element of manouvre, grouped into Corps and uses two hour turns on a 2km per hex grid. So good for quite big battles.

General Briefing
When war broke out it was inevitable that the French would seek to regain the ‘lost territories’ of Alsace-Lorraine. The Germans and French were well appraised of the others mobilisation plans, and Joffre, counting the ratio of first  line divisions, felt there was ample margin for an offensive. The main effort was in Lorraine and Northern Alsace, but south of the Vosges, 1st Armee was tasked with taking Mulhouse via the Belfort Gap.

French Briefing
1st Armee will mount a subsidiary operation through the Belfort Gap with a Corps group. The main aim is to threaten the German grouping in the Vosges to the north, and to secure a firm foothold on the west bank of the Rhine. German troops will be de-training across the Rhine, but air reconnaissance indicates little opposition, although one unconfirmed intelligence report mentions an Austrian Army Corps in the area. This is a chance to gain glory for France and gain revenge for the treachery of 1870. French elan will prevail and we will sweep away the enemy machineguns at the point of a bayonet.

German Briefing
The French will almost certainly attack, although the terrain and communications in this sector precludes a major offensive. The Landwehr provide a screen and the most important task for IX Corps is to cover the detraining of our VIII Reserve Corps across the Rhine. These will be committed to front line action and combined with an extra division assigned to IX Corps, will give us a significant force superiority over the French. The temporary loss of ground can be tolerated, as long as it is regained later. 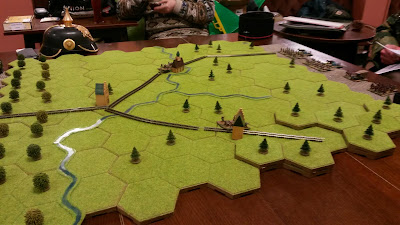 The battlefield from the north. The Swiss border is the far edge, the French frontier is on to the right with fortress of Belfort a few km further back, the Rhine is on the far side of the forests to the left and nearest the camera are the foothills of the Vosges. Mulhouse is on the rail junction.  Altkirk and Thann are each garrisoned by a brigade of Landwehr. 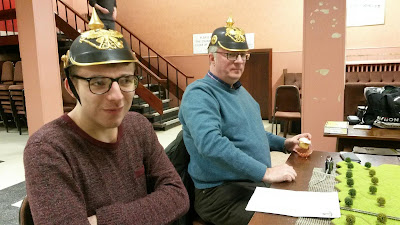 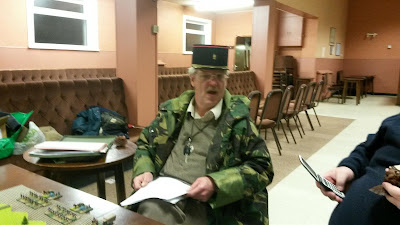 The French are rather more relaxed. 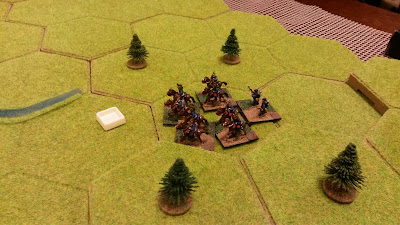 8th Cavalry Div ride on looking glorious, accompanied by a battalion of Chasseurs a Pied. 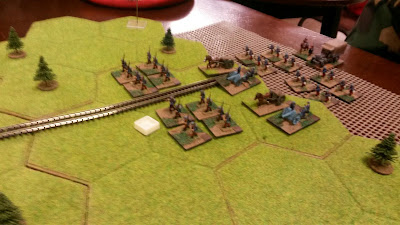 VII Corps marches on up the main Belfort-Mulhouse railway line. 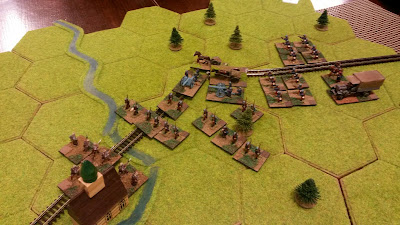 As it approaches Altkirk, the leading brigades deploy and the artillery unlimbers. The Landwehr await them on the other side of the river. 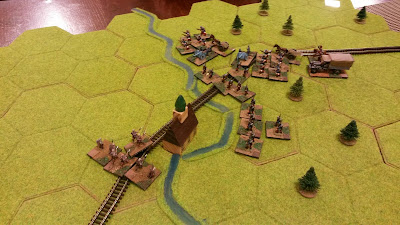 The French artillery drives the Germans out of the town. 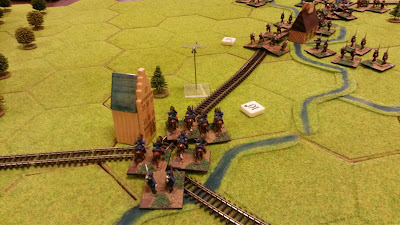 Meanwhile 8th Cavalry Div bypasses Thann and rides into Mulhouse, to be greeted by jubilant crowds. An aircraft from VII Corps provides liaison. At this point the remaining Landwehr melted away and the French had a day or so to organise their defences. The triumph is telegraphed to the War Ministry and the Paris newspapers, much to the fury of Joffre. 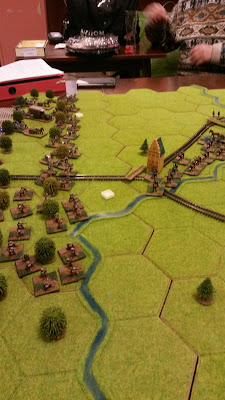 Ooer, what is this? 9th August dawns with hordes of Germans emerging from the Rhineland forests. IX Corps and VIII (Reserve) Corps have arrived. 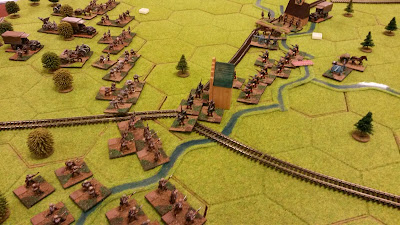 The Germans close in on Mulhouse where the French have been digging in along the railway line. The first assaults on Muhouse are repulsed. 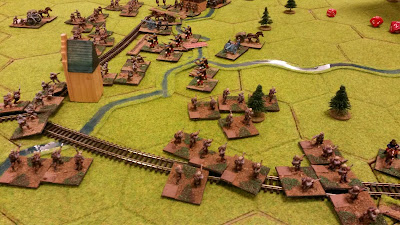 Eventually, German numbers and artillery superiority tell as the line is outflanked. The empty hex is  where an entire French brigade fought to the last man after being forced from the town. 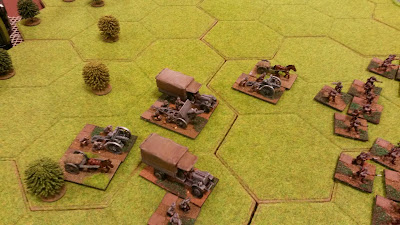 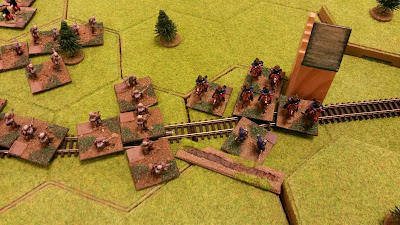 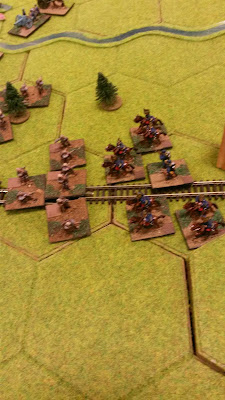 8th Cavalry Div conducts a mounted counterattack, which is very glorious but predictably shot to pieces by rifle and machinegun fire. By this time, heavy losses have exhausted the French, and on the 10th they fell back to Belfort and the Germans retook the lost ground.

This went very well, in fact I was delighted that it replicated the historical result exactly (the exhausted French falling back on the 10th, after taking Mulhouse on the 7th). The players seemed to enjoy themselves and the rules worked excellently as ever. The French in the game adopted a rather more imaginative strategy than their historical counterparts who just trudged a division down each railway line and had to fight for both towns. The cavalry sweep worked excellently, and the concentrated infantry Corps was able to push the German out of Altkirk with minimal losses.

Sadly, as in real life, Joffre had miscalculated the correlation of force, assuming the Germans reserve divisions were not combat ready. When the Germans did turn up with all their forces (including the reserves) the French were heavily outnumbered and forced back. 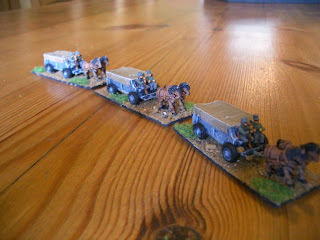 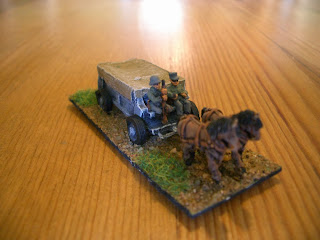 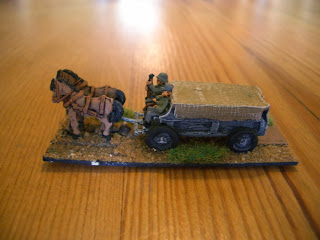 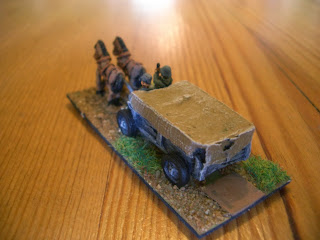