Not much gaming activity after the outing to Muenchengratz. I've knocked up a quick Waterloo scenario to try out Leipzig-Lite (from Baccus), which we were going to do this week, but instead sat around the club discussing John Armatys' exciting outing to Catterick firing Browning HPs and going on the L85 simulator. We'll probably do it next week now.

Otherwise I've been inspired by David Galntz's 'From the Don to the Dneipr' to work up some operational scenarios around the early 1943 Battles for Kharkov. Using Panzergruppe I'll probably have to up the ground scale to 15km per hex for some of the battles, and raise the element representation to half divisions, which will work for the pre-Kursk stuff. Post Kursk the unit densities just become ridiculous (Corps assault frontages of 5km) so I'll probably have to drop back to 10km hexes for that. Bizarrely the hardest things to find out about have been the composition of some of the key (and very famous) German units, the SS Panzer Corps and Grossdeutschland. The nice people on TMP have been very helpful though, and I've got a reasonable idea how to model these now. As even the biggest division is probably only going to rate three stands, it is all fairly broad brush!

I've also been thinking about mods to Platoon Commanders War to turn it into Platoon Commanders Counter Insurgency. These mainly revolve around having a bit more detail for casualties and casevac, as well as representing the training differences for different types of insurgent and the treatment of RPGs etc. I'll have to write these down at some point, but my new SLR toting Brits might well be having an outing to Kenya/Aden/Yemen to try some of these things out. I picked up a very nice Corgi Westland Wessex yesterday, which can fly them around, so I can see a spot of aid to the civil power coming on.
Posted by Martin Rapier at 00:49 No comments:

Clam Gallas gets it wrong

I ran a scenario covering the Battle of Muenchengratz last night (APW, 1866). Historically the Austrian 1st Corps under Clam Gallas had just linked up with the Saxon Army, and decided discretion was the better part of valour in the face of converging Prussian Corps, so they beat a hasty retreat. There was a minor rearguard action, but the Prussians stormed across the Iser losing only a few hundred men as the Austrians and Saxons slipped away.

I wanted to see what would happen if the Austrians had decided to stand and fight, as their position was actually quite strong. Tim Gow and John Armatys took the Elbe Army and 1st Army respectively while I ran the Austrians. The Austrians busied themselves fortifying Muenchengratz and Musky Hill while the Prussian columns sorted themselves out. The Saxons meanwhile turned around and formed up south of Muenchengratz.

Elbe Army got in a bit of a mess during its deployment, while its lead division formed up fairly smartly, the rest lagged behind and the Corps commander rode up and down the column trying to chivvy everyone along. 1st Army meanwhile got its skates on and aggressively pushed across the Iser in the north. The leading division plunged into the heart of the Austrian position, prompting one brigade to conduct a charge in battalion columns against them. Outnumbered 3:2 the Prussians took heavy casualties from the Austrian guns and rifles, and their regiments began to waver. Their needle guns inflicted heavy losses in return on the Austrians and pinned their units. A fresh Prussian division entered the fray, which tipped the tide in their favour. The wavering division held on and it was the Austrians turn to become disordered as the brigade on their right flank was shot to pieces. Another Prussian division came into action on the left flank and the entire Austrian right flank collapsed, leaving their guns behind them. A reserve brigade hastening to their rescue was caught in march column by the pursuing Prussians and routed.

Over on the left the Saxons and Austrians contented themselves with firing salvoes of artillery over the river, while Clam Gallas supervised the evacuation of stores in Muenchengratz. They seemed oblivious to the impending disaster on their right, transfixed by the attempts of the Prussians on the other bank to deploy. Eventually the Prussians became tired of waiting and pushed a division over the Iser north of the town and street fighting broke out. Clam Gallas now decided that perhaps things were getting a bit dangerous, but his convoy was trapped in the chaos of supply wagons. The town defenders only put up a perfunctory resistance once the Prussians closed in, and collapsed after a couple of hours fighting. Clam Gallas finally managed to escape down the road towards Jicin, as the Saxons decided they couldn't take on the entire Prussian Army and retreated southwards. Sadly for the Austrian general, he became entangled in more traffic jams on the road, and a Prussian division from the north swooped down and took his whole party prisoner. This left Austrian 1st Corps in tatters, and the Saxons once more doomed to take the long road to Jicin.

I was pleased with how the game went, and fully expected the Austrians to do much better. They did inflict heavy losses on the Prussians (some 4,500 vs 300 in the original battle) but in turn their forces were all but completely disbanded, vindicating the actual decision in 1866 to retreat rather than fight. The rules worked OK (Rifle & Kepi, available on my website) but I still need to think about the transition from squares to hexes, as it introduces some facing problems which I haven't quite worked through. We are having a think about large scale Napoleonic games, and it is possible these rules will work for that, but I'll need to re-work the balance between infantry, cavalry and guns. We are trying out Leipzig Lite next week, to see if there are any good ideas therein. I've sort of worked out a Waterloo scenario, so we'll see how it goes.
Posted by Martin Rapier at 09:10 1 comment: 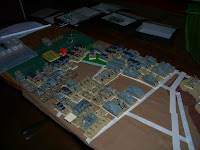 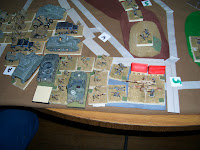 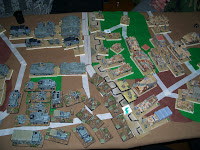