A trip to Normandy

I ran my Rauray scenario at the club last week. We had a bit of a thin turnout but Jerry Ellsmore and John Armatys turned up, and we managed to play the game. I'd hastily revised RKKA Brigade Commander for the western front, so this was a bit of a tryout to see how it went. In the end it was fairly historical as IInd SS Panzer Corps beat itself to pieces against 70th Brigade (supported by the entire divisional artillery). 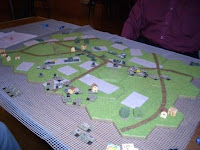 The battlefield from the southwest, Rauray is in the centre. KG Weidinger is the foreground, largely pinned down while the 9th SS Armoured KG is in the distance. 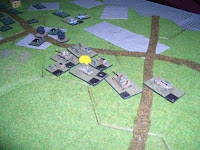 9th SS. One battalion has already taken heavy losses driving the British back and this one has fallen into confusion in front of the enemy, despite the Nebelwerfer fire providing support. 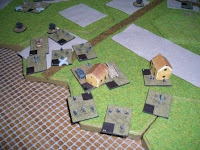 KG Weidinger largely stalled having been pinned down by artillery fire for most of the game (barrage markers can still be seen). The attached panzer IVs from 9th SS can be seen in the distance duelling with British shermans. 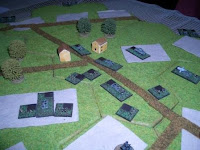 70th Brigade remains deployed around Rauray, the reserve battalion is completely intact, although one of the frontline battalions has taken heavy losses.

The game went OK, but I was left feeling dissatisfied with some of the mechanisms and dug out some of my other efforts to cover this theatre. I'll probably keep the card activation and hexes, but I need to redo the combat system so it is less attritional and more about fire and movement.

Posted by Martin Rapier at 09:47 No comments:

A Walk in the Sun

I ran my Aden counter-insurgency game last week (RM Commandos on a search & destroy mission), this was essentially a tryout for a session at COW this summer. The rules are essentially a reworked version of 'A Platoon Commanders War' by John Armatys and I structured the game like an RPG with all the players on one side and the communists managed by an umpire and mechanisms which bore a distinct resemblance to those used in my WW1 East African game.

As is often the case with this sort of thing, the rules mattered less than the scenario, and although the game went OK, there were a few rough bits to iron out when things flagged a bit and bits where I had to make stuff up as I wasn't sure how to resolve things. Having run it through once, I've got more idea how to make it flow more smoothly (adopting a variable length bound approach from the outset will help a great deal).

I wouldn't describe it as earth-shatteringly innovative, but hopefully it will provide a reasonable simulation of small-unit operations in that most difficult of environments, counter insurgency. In the event the players attained their objective, and the enemy compound vanished in a most satisfying pillar of smoke as Hunter GA9s pounded it into rubble. British casualties were minimal, but necessitated bringing in the Corgi Wessex helicopter for casualty evacuation, its first outing on the tabletop. Tim Gow took a few photos, so if I can prise them off him, I'll put some in here.

Apart from that I've been working on a Megablitz scenario for the 49th Infantry Div attack on Wouw/Roosendaal in October 1944 and I've knocked up a quick game for this week, the 9th SS Panzer Division attack on 70th Inf Bde in Rauray during Operation Epsom (based on the excellent Rapid Fire scenario covering the same battle). I've hastily reworked 'Red Army Brigade Commander' for NWE, so we'll see how that goes.

I've pretty much finished phase 1 of painting my new 20mm stuff, and my shiny new German Infantry Division went into its boxfile yesterday. I've undercoated the next wave now (exclusively vehicles), but I'll focus on painting the odd bits of British stuff I need for the 49th Div game plus a couple of fun things (like an ex-Chris Willey Sturmtiger converted from the Aifix model). The extra German corps assets will take a bit of work as I'll need to do some model conversions and build a Flak Vierling virtually from scatch, so that can wait a bit.
Posted by Martin Rapier at 00:07 No comments: