I recently re-read 'Simulating War' by Professor Phil Sabin. It is a couple of years since I last read it, and it was interesting how much more I got from it this time. 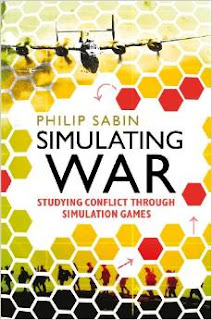 The first time I read it, it was largely a matter of confirming my own prejudices about how badly many/most/all wargames rules model the realities of twentieth century land warfare, in particular the fallacy of the Lanchester square law which holds that combat power and losses are a square (and inverse square) of force ratios.   This is demonstrably not the case in even the most trivial of real life examples, as otherwise simply throwing more bodies and tanks into the fray would be the solution to every tactical problem.

Anyway, I digress. This time around, one of the main things I got from it was a better understanding of the difference between  wargames as command simulators and as a mechanism to explore a historical narrative of events. In the former case, quite different mechanisms need to be involved, generally modelling various degrees of friction and fog of war (and all those mechanisms like cards or hidden movement which wargamers love or hate) whereas for the latter, a much more open approach is possible and generally much closer to traditional open wargames with high levels of knowledge. Trying to both at once has the potential to cause great confusion, and may explain many of my abortive attempts to come up with 'perfect' sets of rules.

Such thoughts did set me thinking abut how the general approach in Phils 'Korsun Pocket' game could actually be applied as more generic operational Eastern Front set of rules, with the grandiose scale of the stands representing entire Divisions and Corps - a step up from my own Panzergruppe rules. Re-reading David Glantz's 'From the Don to the Dneipr' produced lots of examples where the combat model and scale of representation fitted rather well.  Anyway, various half baked ideas emerged over the summer, so that one is a work in progress.

It also got me thinking about my favourite WW2 level, brigade level games with platoon(ish) sized stands. My last outing in this arena was a bit of a disaster, too much stuff with mechanisms which were too slow. Inspiration has once more struck, so again, a work in progress there.

In the meantime I have been doing some painting, and interesting foray into 2mm Pike and Shot thanks to an impulse buy from Mr Gow at Triples, as well as finally painting the 15mm Early WW2 Germans I got last year. I have also been very gratified to find people like my One Hour Wargame rule variants, so I seem to be on the right track with some of this stuff at least.