One bargain I picked up at Triples this year was a pack of Jeeps on the bring and buy. You can never have too many jeeps, and at a fiver for three they were actually pretty reasonable compared to the usual BF price. 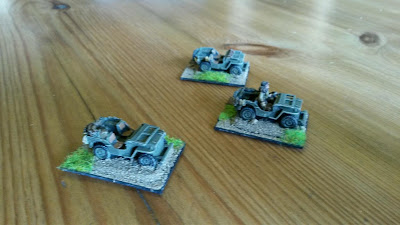 The finished article motors across the dining table. They were marketed as recce jeeps and came with piles of extra machineguns etc but I did them fairly plain so I could use them for a range of things. 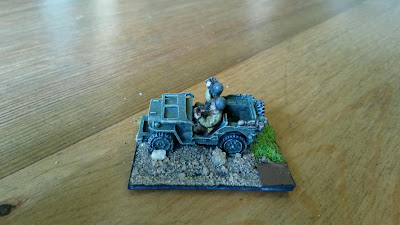 They are made of the usual BF resin, No fiddly metal bits to stick on apart from the crew (and MGs if desired). Eagle eyed readers will notice that the crew look like Americans. I haven't painted any Americans bigger than 6mm since 1974, so this is also a bit of a preview of a bigger project. 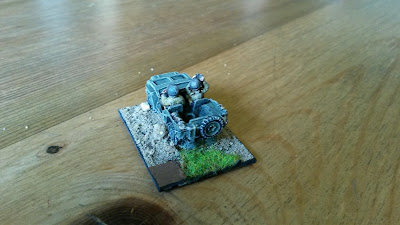 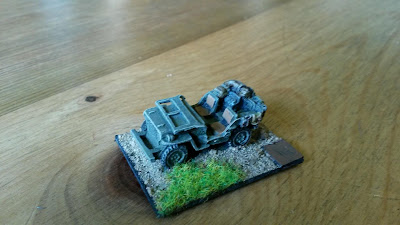 Another empty jeep, this one with even more stowage in it.

So, nice easy models with a variety of uses, and in a pack of three, decent value even at full price. I did them just plain OD, or rather sort of.... I have a real problem with Vallejo paint, lovely quality paint but the colours never dry the colour they come out of the pot, unlike Humbrol, so you end up having to experiment to get the right effect. In the end I did this in 'Russian Uniform' (which is unlike any real Russian uniform I've ever seen, apart from heavy wool post-war ones) with a wash of 'Bronze Green' (which does at least bear a passing resemblance to to Bronze Green) and then muddied the whole thing up a bit. Anyway, they look alright from a distance and they'll do for US, British and Russian usage.
Posted by Martin Rapier at 09:53 4 comments:

In a galaxy far,  far away.... there was a planet which bore some resemblance to modern day goings on in Syria. A bunch of freedom fighters (better known as terrorist rebel scum) holded up in a strategic town, preventing the legal planetary government from bringing peace and order to the galaxy, with a little aid from the benevolent Empire. Meanwhile the rebels were suspected of having some aid with the weak kneed, liberal hand waving Federation.

This was a tryout of Johns latest version of a simplified variant of the old 'Encounter' rules, set planet side. It heavily simplified the firing to-hit procedures (the original game uses a complex firing table with percentages etc) aimed at recreating the Star Wars experience of masses of fire but few hits. A clever mechanism was the saving throw form hits, which was modified by posture, cover and specifc weapon effects vs various levels of armour (so some types of weapon were more effective against some types of cover and armour than others). Very neat. 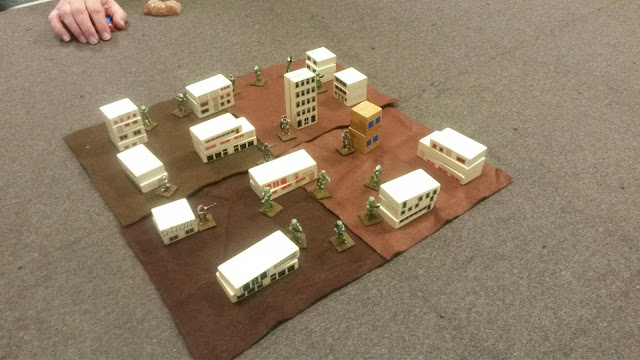 Rebel militia scum lurk in the town. A few of them seem to be behaving rather more professionally than the others, why could that be? 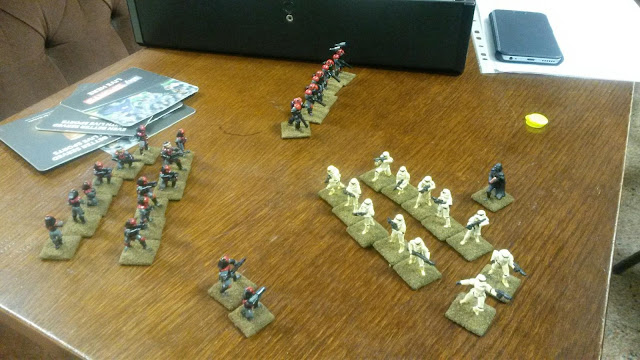 The highly efficient forces of the Riasyian government, along with a little help from their friends in space. I wonder who that chap in black can be. Ahem. 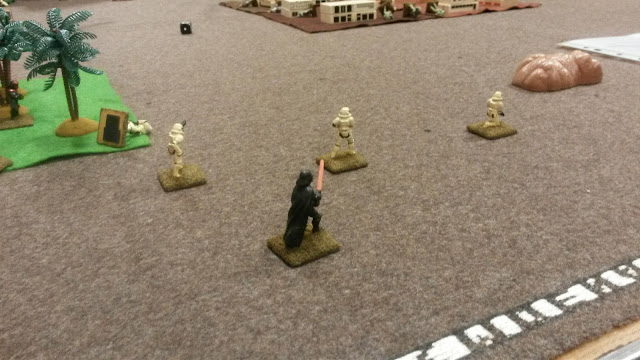 Darth encourages the Stormtroopers to greater efforts. The chap on the left hasn't been shot, he is lying down (something the troopers in the films seem to be unable to do). 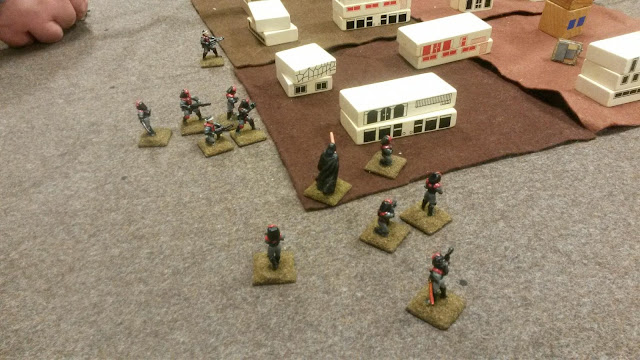 Inevitably Imperial firepower prevails, and Darth leads the Riasyian forces into the smouldering rubble of the town. Sadly he didn't get a chance to chop anyone up with his lightsabre.

This was a lot of fun, the new streamlined combat system worked very well although the scenario became quite fire heavy. I think the rebels would have done much better to defend inside the town than at its edges, and to make more use of the available cover. In the event they were defeated so badly that they didn't call in the overt intervention of Federation forces, and disguised SF types supporting the militia went un-noticed in the chaos.
Posted by Martin Rapier at 06:33 3 comments:

I've been working on a set of WW2 rules to bridge the gap between battalion sized actions and full brigades. A lot of battles in the war resolved to a few battalions, too small for something like NATO Brigade Commander, but too big for Battlegroup or Combat 300 in the typical playing times we have on a club  night.

I'd worked them up into something playable after playtesting at home, the basic elements being strong vehicle platoons, and half rifle companies (so rifle companies have two stands, tank squadrons generally three). It included elements form a number of sets including the shock/suppression dice concept from 5 Core Brigade Commander, which I think is a really clever idea.

The main innovation was an action/reaction table along the line of Fire & Fury, with most 'morale' handled at element level but formation reactions handled by the  reaction table which included the ability to manouvre an enemy out of a position by outflanking etc.

I dragged out one of my standard test scenarios, the 43rd Div flanking attack on Elst on 23rd (?) September 1944. Two reinforced infantry battalions vs Kampfgruppe Knaust in the pouring rain. 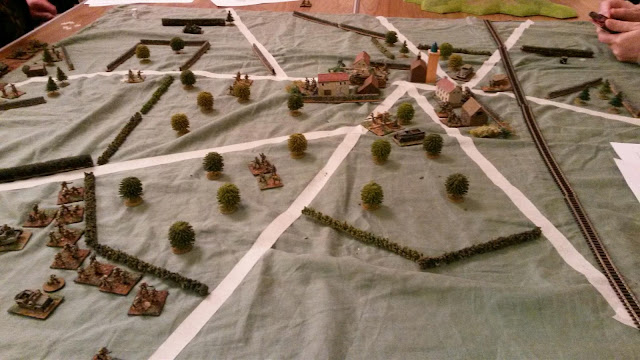 Elst from the south, the main rail line to Arnhem on the right. The British have pushed up to the edge of the orchards around the town, while various Germans lurk within. A group of Panthers from 10th SS Panzer Div are vaguely visible in the town. The church tower provides observation over the area. 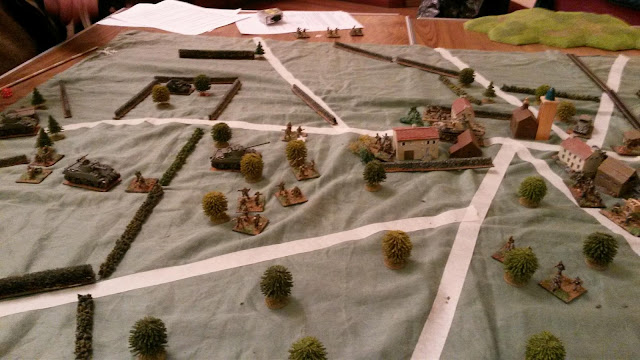 A squadron of 4/7 Dragoon Guards moves up to support the infantry attacking the west side of the village. The Shermans on the road to the left have been engaged and driven back by the Panthers. 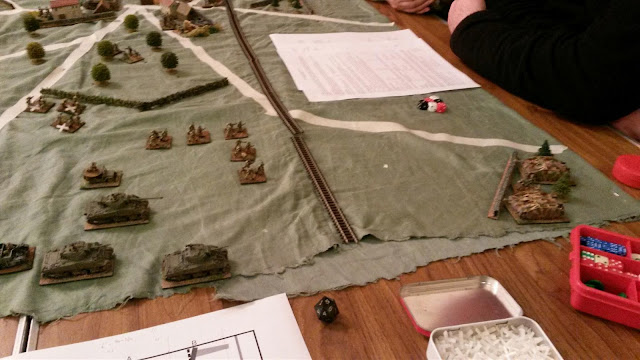 In the south the flanking battalion and its accompanying Shermans run across Stug Brigade 280 lurking in a wood while Nebelwerfers stonk the infantry by the orchard.

While the photos look quite pretty, the playtest revealed quite a few creaky bits. The first thing to go was the formation reaction table which we kept forgetting to do and didn't seem to add much to the game (although it worked very well when I tried it at home!) and we had a frank exchange of views about the effectiveness (or not) of artillery fire. I don't think I explained very well the scale of the game, as at 1" = 75 yards even a full 25pdr regimental shoot is only going to cover about 6".

The scenario was probably  a bit over-complex too, with various complicated weather and ground conditions factors and some rather naff victory conditions which encouraged a-historical play. So, it isn't completely back to the drawing board as some things worked OK (modelling troop quality via saving throws worked, as did the non beaten zone approach to area fire) but some ruthless simplification is called for. First thing to go is the reaction table, I'll just rely on players being sensible instead, and next time we'll do a simple multiple battalion assault in nice sunny weather and not over ground which has been turned in to a swamp.

Well, that is the point of playtesting after all.