I ran my 'Operation Thruster' Megablitz scenario at the club a couple of weeks ago. I thought it went OK and tripling the size of the original battlefield gave some scope for manouvre. Both sides had considerable challenges, the Germans in particular were heavily outnumbered, but in the event conducted a masterful mobile defence and managed to burn the British out while only committing half their infantry forces. The British penchant for unsupported frontal attacks didn't help. I was sorely disapointed that the division I'd painted specially for the game never came out of its box, but at least the Elephant did.

At some point I'll upload the scenario to the Megablitz group, but here are a couple of photos. 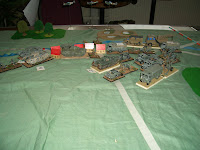 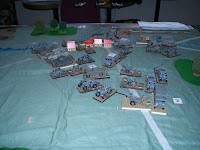 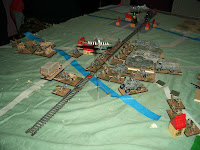