Not doing very well with this blogging thing am I? Rest assured that I am still playing some games etc., just not getting around to writing about it.
Further to my last post about COW, I helped run a few sessions but also put on another big one of my own, in this case alos covering WW1, but simulating a Corps level trench warfare assault. Sadly there was some command and control confusion about when/where/if the session was actually taking place and I didn't have many punters. In the event the handful which turned up managed to come up with a brilliant plan: 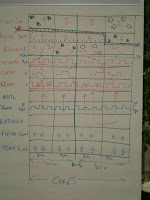 Lots of boundaries, phase lines etc. It particularly helped that the wily Corps and divisonal commanders managed to obtain enough heavy artillery and ammunition to utterly flatten the German positions, although this completely tore up the already waterlogged ground.
Just to add insult to injury, the assault was preceded by a heavy gas attack along the entire front. 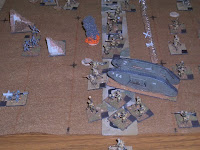 On the ground it ended up looking like this, as waves of British infantry pushed thruogh the shattered defences. Here the leading troops are passing through the German battlezone against scattered resistance from enemy reserves occupying strongpionts centered on villages to the rear.
To everyones astonishment the tanks lumbered right through to the end, making it as far as the German field artillery positions.
In other gaming news from July/August, we went on a family holiday to the USA. Along with swimming in the Pacific, driving across the desert, having an entertaining encounter with the US medical system via an emergency appendectomy in Las Vegas (seriously!) and riding the cable cars in San Francisco I managed to fit in a visit to a firing range in Nevada with daughter number 2. No restrictions on weapons in Nevada, so she got the 'Coalition Package' - M9, M16 and m249, whereas I went for a G3, M249 and a Sten.
G3 was fun to fire, very similar to an SLR (which I've already fired) and a very satisfying 7.62mm kick. Reasonable grouping and tore the target to shreds.
The M249 was a joy to shoot, really tight grouping, very stable and accurate, although I suspect the bipod and laser sight helped quite a bit.
Sten was....interesting. The range master was a bit nervous about it as he'd had an MP40 explode on him, but in the event it was fine. Very noisy, suprisingly high rate of fire and made nice big 9mm holes in the target. Main thing was it pulled up and left to an extreme degree so even with a three round burst the shots went all over the place. Once you'd got used to it, it was better and you could keep short bursts roughly in the same place. This was the gun I started with and I thought I was the worst shot in the world, but I was heartened to find some holes in the target from an adjacent lane, so at least I really wasn't the worst.
Worth the trip just for that I think.
Posted by Martin Rapier at 04:18 2 comments: