Some of my 2mm stuff was (rather blurrily) seen in action in the recent hypothetical battle north of Wolfsburg. Apart from 2mm being a decent scale to avoid my almost boundless ignorance of post WW2 equipment and organisations, it is also cheap and easy to store! There is a method to the madness however, and my stuff is organised and based to be reasonably flexible.

The primary game system I've aimed at is Tim Gows 'NATO Brigade Commander', which uses company sized bases and is aimed at roughly rgimental sized actions. However I also got enough extras to be able to do lower level actions as well as higher ones using e.g. Megablitz at one base = one battalion. The units tend to live in NBC sized chunks in their storage boxes however.

Triples 2013 was the first public outing of 'Ten Rounds Rapid', our participation game for this year and run by the Wargames Developments Display Team (north). In common with most of our public games, this was designed to be a fairly quick experience so as not to interfere with show shopping, but hopefully to be of some historical interest too. This particular game takes around 30 minutes to run and can accomodate from one to five players. We chose a 1914 theme for 2013 as next year is the 100th anniversary and there may be a glut of WW1 games.

The game is a simulation of battalion level command in the opening days of the First World War and aims to model some of the sorts of concerns and decisions a Lt Colonel commanding an infantry battalion would have to make. I have generally found that WW1 games benefit from some sort of linear grid to regulate movement and firing, in this case the zones represent areas roughly 200 yards across of 2-300 yards deep.

I was keen to replicate historial formations and tactics as far as possible. The British initial setup is prescribed as the pre-war firing line, supports and reserves and the game mechanisms are designed to reward the maintenance and use of this formation. The players soon got the hang of cyclng fresh reserves up to the front and pulling exhausted units out to reorganise. Those who packed everyone into the front line suffered heavy losses and/or suffered the indignity of not having any reserves to respond to German attacks.


We do like to help players get into the spirit of things and have found over the years that funny hats are a great help. Sadly we do not possess a service cap, but we did have Brodie helmet. This was indicated to the players as a desirable object, but then they were told it wouldn't be invented for two more years yet! The Germans had a lot of shiny and smart plastic picklehaubes on display.


One of the biggest design challenges was making an interesting and enjoyable game out of defending. The aim was to get the player to focus on what was going on within their battalion and not to focus too much on the enormous hordes of Germans heading their way. So the main decisions were about keeping the line intact, management of damaged elements, fire control, movement of reserves in anticipation of threats and mounitng local counteratacks.


The inital German wave started deployed in the area of operations, subsquent actviites were governed by cards played against each company area. Black was good for the Germans, red for the British, and they controlled things like waves moving up and macheingun and artillery strikes, The whole battle area was assumed to be under fire the whole time, the strikes represented particularly concentrated barrages.

Combat results affect the entire area, so bunching up results in much heavier casualties, however some bunching is necessary to develop sufficient combat power. British losses are determined partly by how much they fire, the number of dice they throw increases their chance of adverse results, either from casualties as the men are more exposed or from running low on amunition so fire discipline is important. Successful commanders did not fire at poor targets. At close range the British have the option to rapid fire, which doubles their fire effect but doubles their ammunition expenditure too. Rapid fire from two fresh platoons however gives a 96.825% chance of at least pinning all enemy units to their front, the risk of running low on ammo is probably preferable to being overrun by lots of angry Germans.


Over the course of the weekend we ran the game around eighteen times and although there were occasions when the Germans broke into the front line, they were often ejected by a spirited bayonet charge and it was only one one occasion that they broke through into the support area and the British were forced to withdraw. Average losses were around three platoons, the bloodiest comander lost ten(!) and the most successful managed to drive off the Germans without losing any. Two Lt Colonels were killed leading heroic bayonet charges.


The game seemed to be well recieved, as usual a fair degree of umpire input was needed to keep things moving along so we ran it on a rota. One player commented that this game required a bit more thought than some of our other offerings, and we has some repeat players so  some of them must have enjoyed it! The game was enlivened by having some members of the Durham Pals re-enactment group at the show.

I'll do a proper writeup for the WD Journal (The Nugget) later in the summer, including the rules, but first it is going to Partisan in a few weeks and then COW. 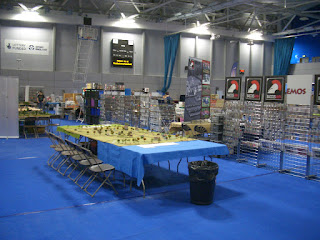 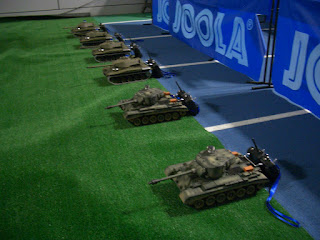 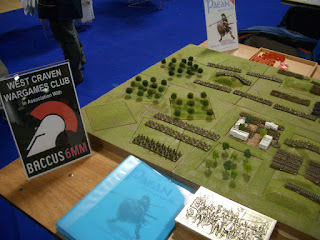 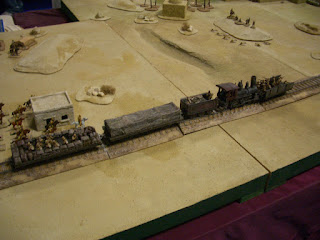 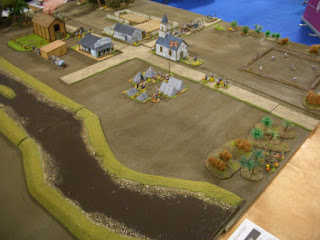 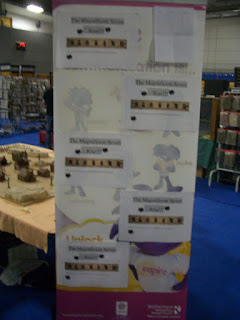 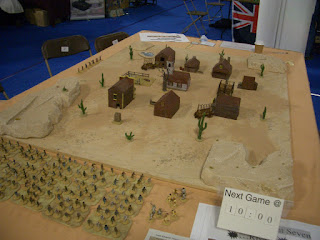 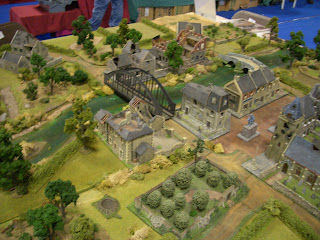 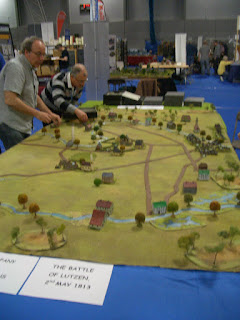 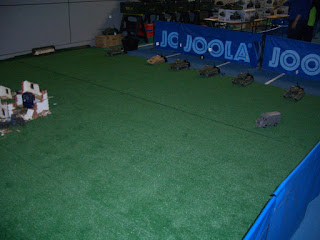 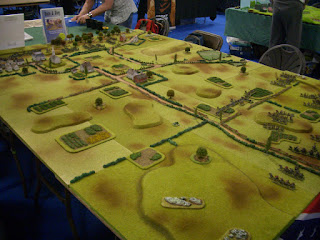 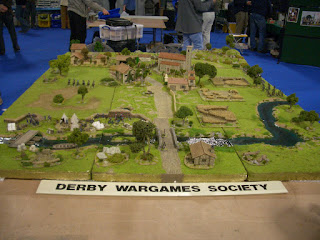 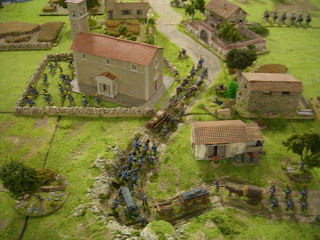 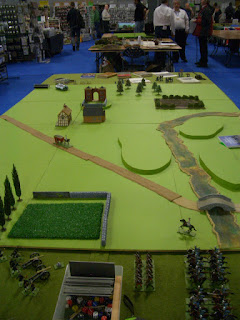 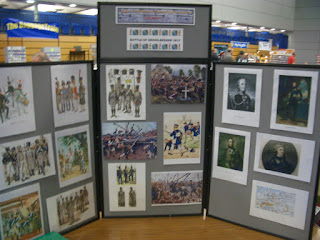 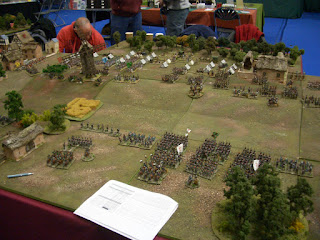 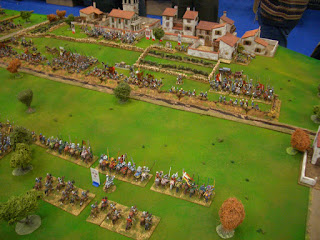 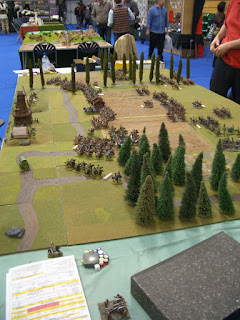 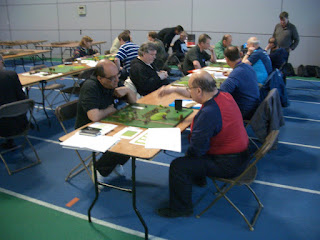 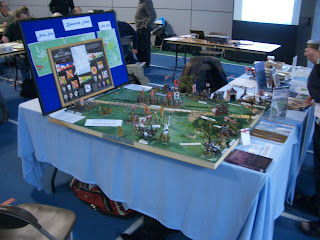 Posted by Martin Rapier at 04:01 No comments: