Some years ago I played Ian Drury's 'Combat 300' at COW, that particular game being a brigade level western desert game, 'The Defence of the Knuston Box'. I was rather taken with the game system, and have variously tinkered with it over the years with a view to battalion/brigade level WW2 games. The original rather showed its heritage from the Minschlacht/Red Square/NBC/OP14 series of games with card activation for each element, and differing dice to differentiate quality. Some elements of those mechanisms can be bit cumbersome for larger games, and even for smaller club night games. Both Ian and I have, in parallel, been working on some streamlining of the systems, and although some of the mods are similar, in other cases we have gone in different directions, so I christened my version Combat 330, as 330 yards is roughly the same as the 300 metre hexes in Ians game.

I'd playtested it at home a few times, and for its first outing at the club I pulled out my old 'Castiglioni' scenario - a British battalion assault on a German blocking position on a road to Rome following the fall of Monte Cassino. Historically it was a US infantry battalion attacking,  but I don't have 15mm US troops. The players (John, Tim and Jerry) took the British and I ran the German defenders. Units are infantry companies or tank/artillery platoons/batteries, with various types of support platoon around. 330 yard hexes and 15 minute turns. Recce troop has reported the road ahead to be mined and covered with mortar fire, so the plucky South Essex have been sent to clear the way. 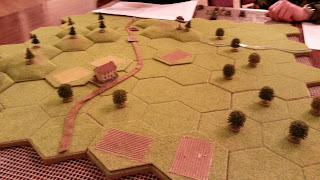 View from the German side. The wicked Germans have hidden themselves well. Minefield dimly visible on the road in the defile. This game was also the first outing of my hexon fields (made up on plastic templates) and the new stream sections I'd made. 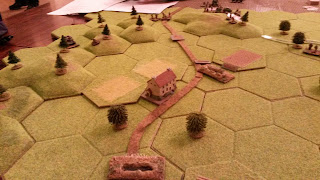 Air recce buzzed the town and spotted signs of entrenchments, in particular what looked like a mortar position to the rear of the town, and possible AT guns amongst the buildings. 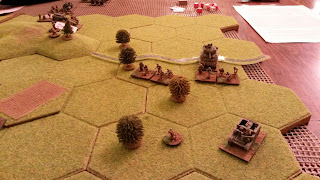 Two British rifle companies went left flanking to link up with carrier section from the recce troop, accompanied by a troop of Shermans. The stream did not prove to be much of an obstacle. 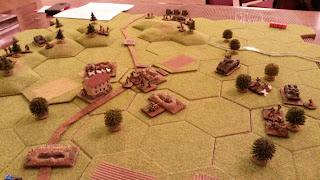 Later in the game, the town is fairly thoroughly enveloped from both sides. The British left flank has bogged down in a prolonged firefight, but on the right the German defences have been pulverised by a regimental 25pdr shoot. 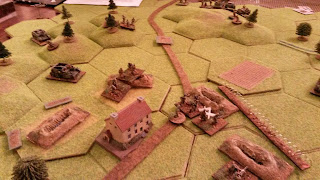 The German left flank is overrun by a rifle company supported by the carrier platoon. On the German right the Allies gradually gained fire superiority. 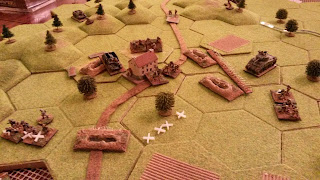 The German defences collapse and the survivors stream to the rear. In the end about half the Germans got away, including their mortars and AT guns (which had pulled back earlier) and the many of the remainder surrendered. The British casualties were fairly light, although one company was rendered ineffective by losses.

All in all it was quite a successful playtest, got through 16 turns (four hours irl) in an hour and a half. Most of the mechanisms worked OK, but the game highlighted some areas where things creaked or were unclear or were too complex to remember so it still needs a few tweaks. Hopefully be back in the New Year as I have a mini-campaign in mind, but I think it needs another decent playtest first before embarking on that.