What a great weekend, despite the sad and untimely death of Paddy Griffiths. A huge turnout and more games than it was possible to attend, I hope Paddy would have been proud of what he had started. To replace Paddys planned plenary game, I adapted my old participation game 'World War One in Three Turns' into a lawn game with real people, which at least kept the planned WW1 theme. People had made a real effort with making cardboard weapons and acquiring suitable hats etc and I'm glad that could all be put to good use. 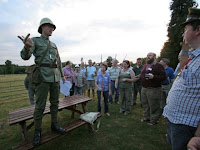 Me in my 'Young Winston' (or maybe Middle Aged Winston) gear briefing the troops. Before coming outside the players were organised into twelve battalions, each with with own name and a set of 'cunning plans' to carry them through the next three years. Half a dozen Germans manned the enemy defences, according to pre set plans for each year. The game started on 1st July 1916. Oh dear.

Graham Evans leads a brigade in bayonet practice. Clearly the most sensible thing to do when faced with dug in machineguns behind barbed wire entanglements is to walk slowly towards them with rifles and bayonets. In each year of the war, the divisional CO (Wayne Thomas) was presented with a set of tactical options for the attack, and the battalions were committed according to pre set plans for each option. The fate of each battalion for each phase of the attack was determined by their cunning plans.

The sun sets on the field of glory. The attack in 1916 was a bit of a disaster, with only one battalion even making it into the German front line. 1917 went rather better, with some troops breaking into the second German line a few thousand yards in the enemy position. 1918 was crowned with glory however as infantry supported by massed tanks crashed right through the German defences to the green fields beyond.


Thanks to Tom for his excellent photos.
Posted by Martin Rapier at 14:39 1 comment: