The virus, gaming and the Battle of Actium

With the current virus lock down, I suspect I'm not going to get much face to face gaming done in the next few months. There has been some talk among the chaps about doing things via computers, but as I'm currently spending hours every day in video conferences, it isn't hugely appealing. I want the feel of lead in my hand and the social contact, but perhaps I'll come around to virtual gaming in time once I've adjusted to the new situation.

So, I shall continue to work my way through my backlog of game posts, and if I have the energy, perhaps run some solo games and write them up. I've painted all these toys and I'm damn well going to play with them.

I wish all my Internet pals well and hope that we all get through this OK. It rather reminds me of the oil crisis, the three day week and ensuing severe stagflation of the mid 1970s in terms of social dislocation, whereas my mum says it reminds her of WW2 breaking out! (in particular when men came to cut all the railings down, which she found very jarring).

Enough of that, and back to gaming.

John had come across interesting One Hour Wargame variant for ancient naval warfare, which bore some resemblance to our Dreadnought game. He put on a game of the Battle of Actium using his collection of 1/1200th scale galleys. 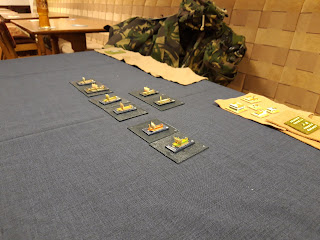 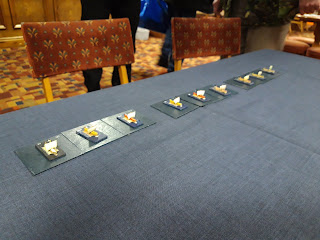 Ah, the good guys. A bunch of 'fast galleys' (Triremes), decent at ramming but somewhat lacking in the boarding department compared to the Egyptian galleys. Our ships had professional crews which helped a bit. Simon was Agrippa, Graham was Arruntias and I got to play Octavian riding one of Lurius's ships (left, centre and right wings respectively). At some point in the future I will no doubt turn into Brian Blessed. 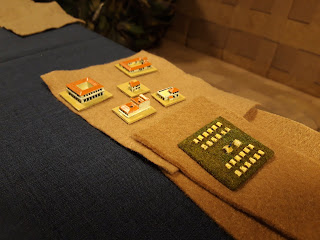 The well defined shore of Greece, I guess this is Actium. I'd always thought the battle was fought near Egypt! 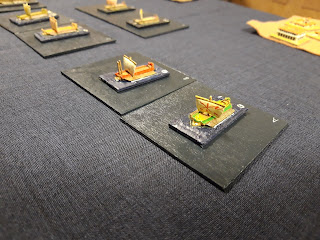 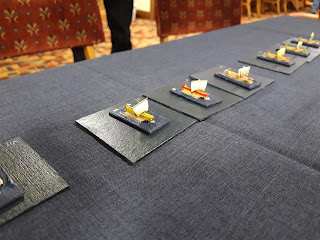 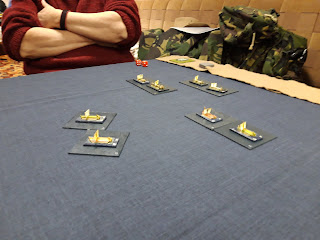 The Antonine fleet set off towards our left flank. They obviously had some sort of plan. Cleopatra hung back in the rear. 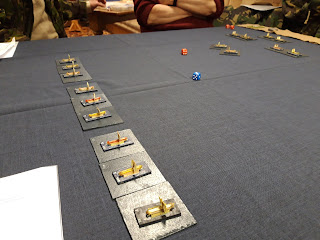 We just rolled forwards in a big long line. Typical Romans, no imagination. 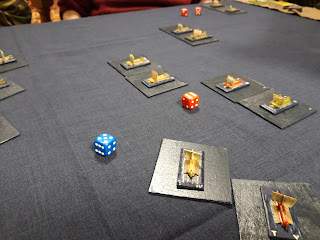 We used our superior speed to get within ramming range, and then things went a bit pear shaped. In this variant, initiative is rolled each turn, and naturally the Egyptians rolled a six to our five, and go the first strike in. 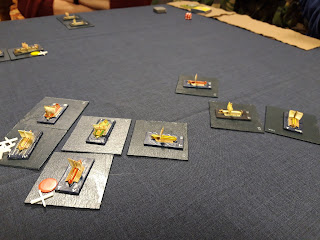 The first strike was pretty devasating as not only did the rammer get a ram attack, they then conducted a boarding attack too. Our ships were soon covered in hit markers. What we should have done was hung back and used our superior speed to close the distance when we did eventually get to play our turn. 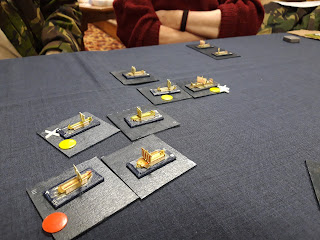 The Egyptian right wing smashed into our left as well. 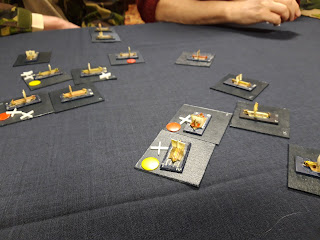 Our right however soon swung around the Egyptians exposed left and proceeded to conduct a series of flank and rear ramming attacks on the enemy ships pinned in boarding actions. That was a bit more satisfactory, you get double hits on a flank ram, which made up for the smaller size of our ships. Now it was the Egyptians turn to take some serious damage. 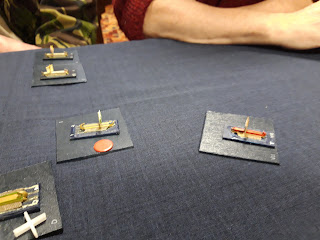 A particular success was sinking Mark Antony's Quinquereme (I rolled a six which with a professional crew meant a whopping 14 hits on a rear attack). In the real battle he'd already skulked off by now in a lighter to join Cleopatra. 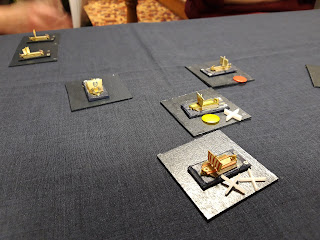 Some of the Egyptians managed to batter their way through our left. 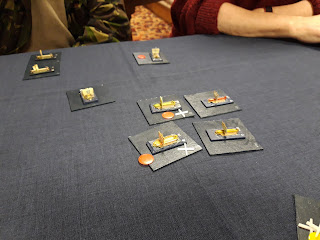 My chaps set off in pursuit, and as we were undamaged, easily caught the crippled Egyptians. While may chaps may have been good at ramming, they were utter rubbish at boarding, rolling a series of ones. 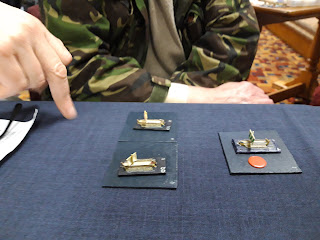 Cleoptra was meanwhile making good her escape. Jerry is helpfully pointing out that they can outrun our crippled galley. 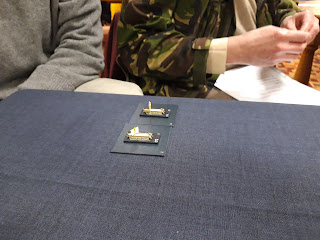 And off she goes. 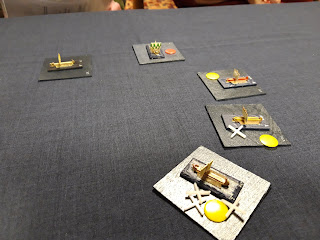 The rest of our fleet in some disarray sets off after the retreating Egyptians. 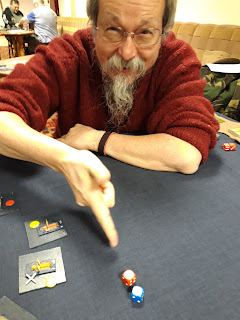 The initiative dice cruelly roll a series of draws. 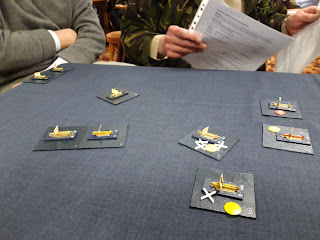 But we do eventually manage to catch the last of Mark Anthony's retreating ships. 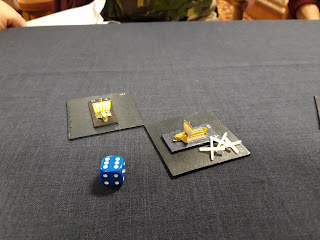 And down it goes, that is the end of Anthony's fleet, although Cleopatras Egyptians have made good their escape. So, despite the vicissitudes of fortune, the good guys won in the end and it was a remarkably historical result. I expect when I become Emporer Augustus someone will write a great poem about that one.

I'm relatively ignorant about galley warfare, but that seemed to capture the essence of the thing and was a tense and very enjoyable game to boot. One Hour Wargames triumph again.