The 10.5cm Leichgeschutz 40 was developed by Krupp after the success of the 7.5cm LG 40 on Crete. The weapon entered service in 1942, and although intended as another paratrooper weapon, it ended up equipped two Heer artillery battalions.

I made this up from a Peter Pig model, acquired many years ago from an ex-member of the club. It has been languishing in my spares box ever since, but given my recent spate of artillery modelling, I though it was time to give it a go. 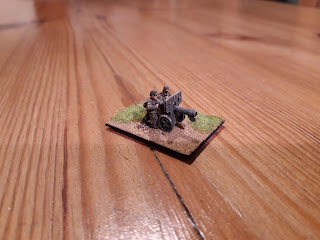 Here it is, a squat little weapon as befits its air portable heritage. Amazingly this fired the same shells as the 10.5cm LeFH 18, albeit with different propellant charges Which was why it ended up in regular artillery battalions. 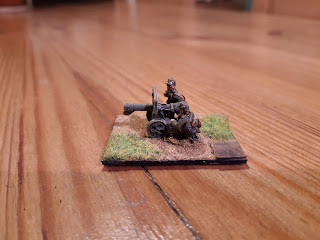 Eagle eyed readers will note that the crew don't look much like Fallschirmjager, and that is because they aren't. The 10.5cm LG40 battalions were assigned to Gebirgsjager units which fought in the Arctic and with Army Group Centre. Very eagle eyed readers will note the little 'Eidelweiss badges' on these chaps caps and right sleeves. Well, little blobs of silver paint anyway.

The PP model came with three FJ crew, but I dug out some Afrika Korps gunners and filed their cap peaks down a bit so they looked more like GJ. 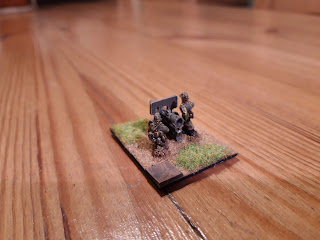 View from the back. There isn't much of a trail at all, I guess because there isn't any recoil. Judging by the size of the gas aperture at the back, you don't want to stand behind one of these. 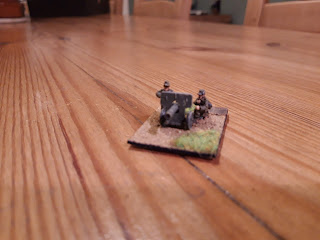 It only had four parts and went together very easily. I should have held the wheels in place with a bit of blu tak, but instead I had to use my fingers while the glue dried. Once it was all done, I just gave it a rough coat of dark blue grey, a heavy drybrush of field grey (RAL 6006) and then a dust drybrush.

It can join my ever increased collection of mountain artillery. A 105mm mountain gun! No wonder the GJ grabbed them all.