We've done Dettingen before at the club using Brown Bess, but John wanted to use it as a test bed for his squared version and also as a tryout for his Powerpoint implementation of remote gaming. He'd drawn out the battlefield using multiple layers in PP, created the unit icons using NATO map symbols with suitable annotations and added some game support markers (hits, routed etc). With it being a PP slide, it is pretty easy to move the various objects around and change their orientation.

I can't actually recall who played which side, but I was British (possibly the British infantry?). I've taken photos of the shared computer screen but the are a bit grainy. 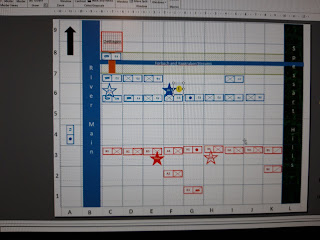 For those unfamiliar with the battle, the retreating Allied army (Dutch, British, Austrian) is hemmed in between the River Main and some forested hills, with its route cut by some wicked French in their way defending a tributary of the Main. Fortunately the French commander decided to deploy his army on the wrong side of the stream, (reputedly at the insistence of the Maison du Roi). Anyway, it gave the Allies a fighting chance at least. 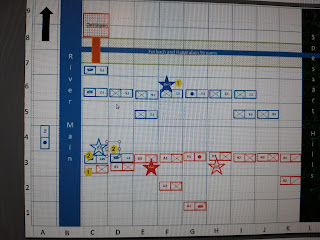 The action opened with a massive cavalry charge against the Allied left flank. Fortunately our musketry was fairly decent and the French took several hits prior to contact. The French infantry also pressed forward on our right but seemed to forget the  rather large gap bewteeen them and the forest. 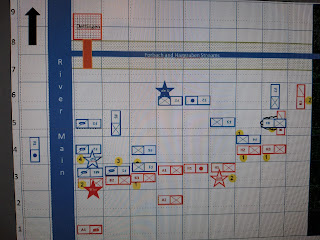 Our cavalry took advantage of this and outflanked them, while our infantry pinned them frontally. Over on the left, our troops were engaged in a prolonged melee with the French cavalry. The initial volleys had given us a  considerable advantage, and the only thing stopping the Maison du Roi routing was the presence of a General. 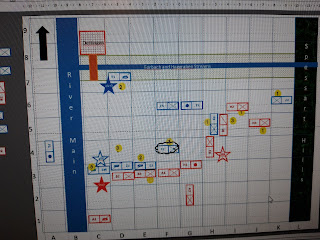 The French left was soon in fairly dire straits. Over on our left the Maison eventually routed but a fresh French cavalry unit routed the weakened British infantry. Fortunately we had cavalry in reserve. 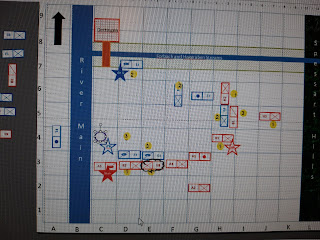 Our cavalry intervened an annihilated the impudent French horsemen. The entire Allied right now wheeled inwards and began mopping up the French centre. 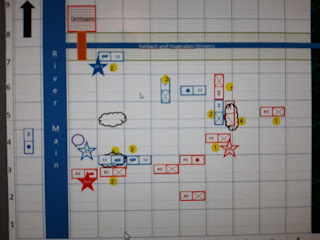 The French left collapsed, and although they did manage to rout an Allied cavalry unit on their right, things weren't looking too good. 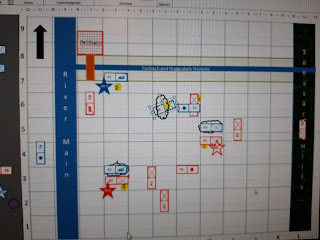 Endgame. The French artillery was overrun and almost every other remaining French unit routed. The Allied army was able to make it escape from the pursuing French force to the south. Hurrah for King George!
For a first tryout of the grid based set, that all worked fine as the basic mechanissms are well tested. My main observation was that it didn't seem very linear - it was far too easy to manouvre to a flank and wheel, which didn't seem very eighteenth century. This was a feature of the grid based movement movement points, but was easily fixed by more stringent wheeling penalties (on the tabletop it takes an entire turn for a unit in line to wheel 90 degrees due to the geometry of the thing), and John updated the rules to include more restrictive turning for units in line.
Otherwise, it was much the same outcome as last time we played it as the inferior quality of the French infantry puts them at a big disadvantage. The French cavalry are very good though and we were fortunate to have driven them off without suffering heavier losses. I can't imagine what trying to assault a French position on the far side of the stream would be like, very nasty indeed.