Tim put on another outing with NBC, this time a trip back to Poland in 1939, so we used my WW2 version. This scenario covered the Battle of Mokra which featured 4th Panzer Div attempting to push a an entrenched Polish cavalry brigade out of a forest. Possibly not the best place to employ tanks....

Simon, Pete and I were the wicked Germans, while John, Graham and Jerry took the plucky Poles. This is perhaps the only NBC game where we've managed to deploy and entire Panzer Division, and a 1939 one at that, with a full panzer brigade of two regiments. Oh my!

Sadly the Germans were attacking off the line of march, so their units arrived in dribs and drabs. Still, the enemy were only blokes on horses so I'm sure it will all be fine. I was cast as Reinhardt, notionally Div Commander for this one, so I just allocated areas of operations to 34th and 35th Panzer Regiments (myself and Pete respectively), and our supporting Schutzen Regiment (Simon). We were basically aiming for a breakthrough in the centre, with 34PzR pinning the Poles frontally, 35 PzR skirting the woods to the south and and the Schutzen crashing through the woods to support Pete. 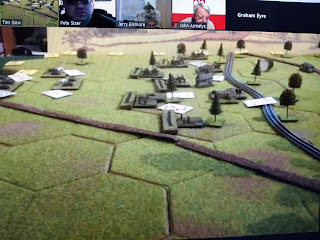 View from the south. Mokre and its surrounding forests is packed with dug in Poles. My 34th PzR visible in the distance. To model the historically disjointed German attacks, Tim had modelled each PzR with three small battalions instead of two big battalions, 34th PzR also had a few hits on it already. 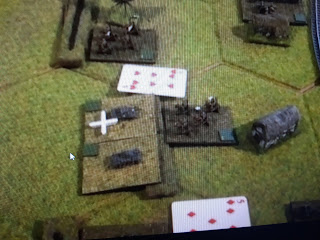 One of my battalions crashed into this enticing gap in the woods. I hadn't realised that two batteries of Polish 75mm guns were positioned further back to cover it with direct fire! 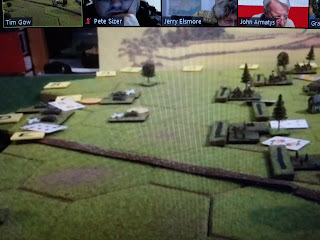 The assault could have gone better and although we inflicted some losses and routed one regiment of Poles, most of my regiment ended up on its start line in a state of disorder, leaving some more burning panzers behind. We'd certainly got their attention though and now 35th PzR was turning up. 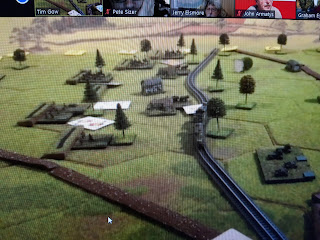 The Polish armoured reserves trundled into view. A mixed battalion of tankettes and armoured cars, plus an armoured train! 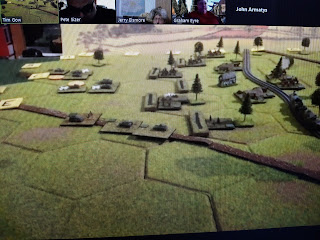 My chaps rallied and reorganised for another go, while Pete pushed a fresh battalion down the road. 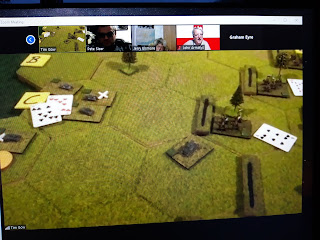 My Panzer IVs hung around shelling the Polish trenches while the Pz Is and IIs sorted themselves out. The 75mm direct fire HE was surprisingly effective (or lucky). 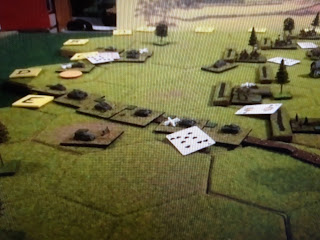 While I kept the Poles busy, the rest of Petes Regiment rolled on in a big column down the road, in somewhat better shape than my chaps. 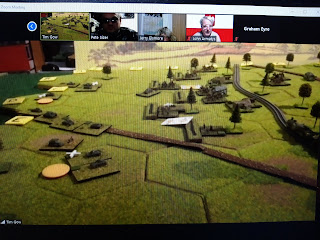 Unfortunately his lead battalion took some hits from the guns in the train and fell back in disorder, 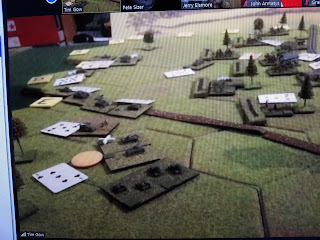 This was followed up by an impudent attack by the Polish armour! The Poles managed to obliterate the disorganised Germans. 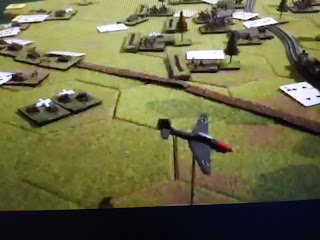 Intervention by Stukas didn't see them off. 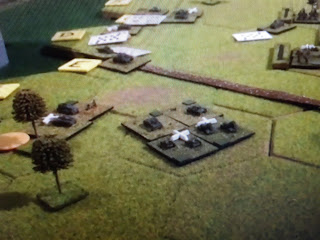 And it took another Panzer battalion to engage them. 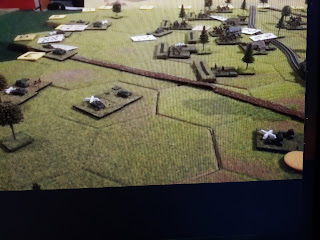 Who duly assaulted them and the handful of Polish survivors broke and fell back, down to platoon strength. 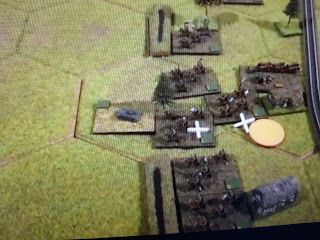 My guys attacked the gap again as fresh Polish troops moved up, but once more suffered heavy losses even though one Polish unit was routed. 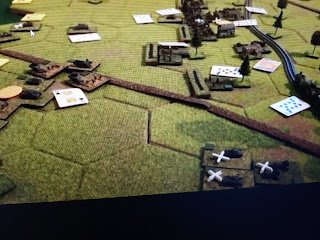 My survivors fell back again, while Pete charged the remains of the Polish armour (bottom right corner). 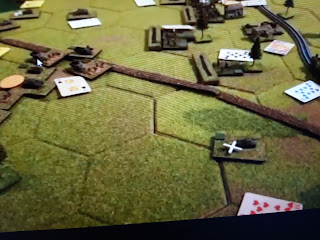 The Germans were victorious, but again at heavy cost. This battalion was reduced to half a stand. By now the Schutzen units were starting to appear. 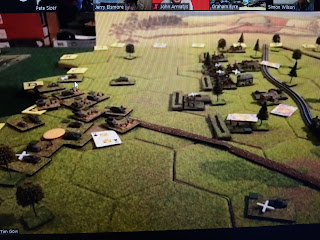 A great big mass of German units was forming up around the road while the Poles sorted their defences out. If only we'd had all this stuff to start with! 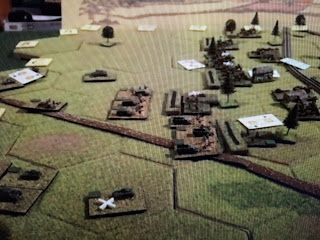 The Schutzen battalions attacked on foot against the two southern woods hexes. Mark IV companies provided fire support from each flank (the divisional artillery was still way back down the road). 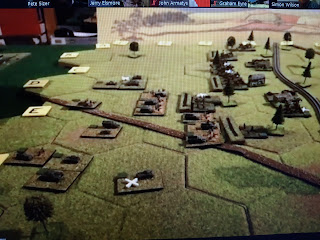 Desperate fighting took place over the trenches, as the Poles grimly hung on. The battered panzers had sorted themselves out now, 35th PzR started to move up and 34th PzR reorganised itself into a single composite battalion, led my by my personal command stand. 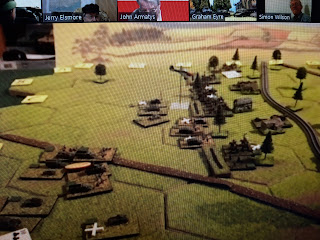 One of the German rifle battalions fell back in disorder, but the other bludgeoned its way into the Polish trenches. Stukas meanwhile softened up the defenders of the gap in front of 34th PzR. 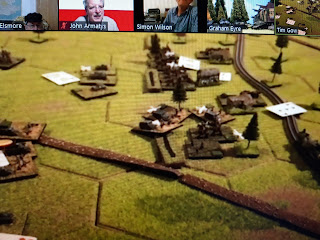 The victorious German infantry pressed on and attacked the second Polish regiment to its south east. 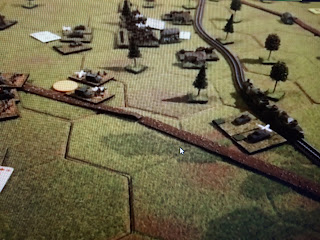 They manged to defeat the second Polish regiment, but in turn suffered such heavy losses that they also broke and fell back. The woods south of Mokre were now clear of enemy though, including the annoying AT position which had shot up 34th PzR repeatedly. 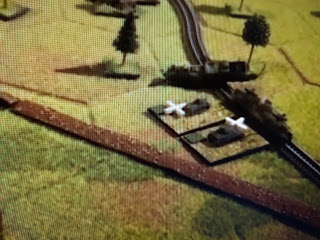 While all this excitement was going on, one of Petes battalions assaulted the armoured train, whose ability to evade was a bit limited. Although the train inflicted some losses, the panzers shot it up at close range and it was disabled. 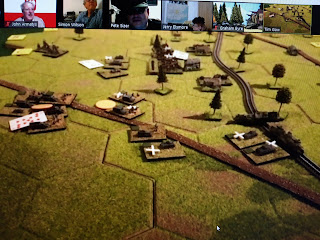 The Polish southern flank had pretty much collapsed by now and the way was open towards Warsaw. 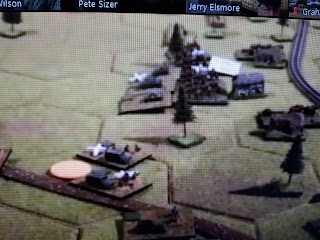 The final act was for 34th PzR to assault the gap for a third time and this time they succeeded in defeating the defenders and setting themselves up to overrun the Polish gun line. With that we called it a day, the Germans had managed to break through and seriously damaged the defenders, but at hideous cost to themselves, losing 150 tanks in the process. Funnily enough, the Poles claimed 150 tanks in the original battle, and Polish cavalry were well tooled up with heavy anti-tank rifles which could make mincemeat of all the early panzers, most of which were only bullet proof.
That was a good game covering an interesting historical battle. NBC worked fine once more, and having larger units and an number of HQs allowed the players to cycle their units between reorganising and the front. The Poles acquitted themselves well and it was touch and go for the Germans all the way through. irl 4th Panzer discovered that unsupported tanks don't work too well in forests, and a few days later (having repaired many of their losses) they also discovered they don't work too well in cities as they attacked Warsaw. None of this shambles seemed to affect Reinhardts career, as he was given a full Panzer Corps in France and ended up commanding an entire Army Group in 1944.