As we hadn't had an Ancients outing for a while, Tim revisited the Peleponnesian Wars once more.

This time the Spartan General Brasidas had been ravaging bits of Greece in a somewhat out of control manner and managed to annoy the Athenians so much they sent an Army under Cleon to stop him. Brasidas sat in Amphipolis behind the city wall and after a while Cleon decided to head for home, at which point the Spartans poured out of the city and attacked them in the flank.

John and Tim C took the Athenians while Diego and I took the Spartans. 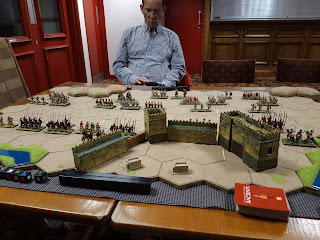 View from behind the mighty (resin) walls of Amphipolis. 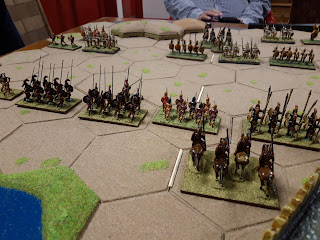 Spartan left.  A whole bunch of Spartan hoplites, plus some auxiliaries and medium cavalry. 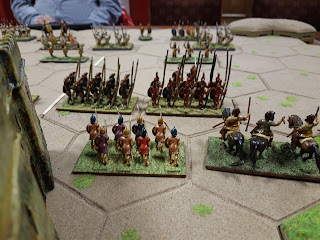 And the Spartan right, yet more Spartans, supported by auxiliaris and light cavalry. This lot led by Brasidas himself. The Spartans in red on the right of the line are Tims very first 25mm metal wargames figures, so veterans in every sense of the word. 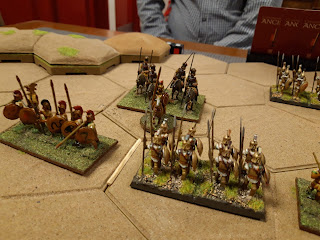 The Athenian right, more hoplites. Cleon is with the medium cavalry unit. 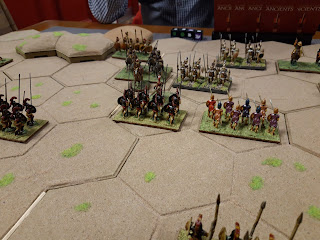 The  Spartans had a decent mix of command cards. We had an option to engage in skirmishing with our light troops, but given that the Athenians were trying to escape, we opted for an immediate attack on our left. 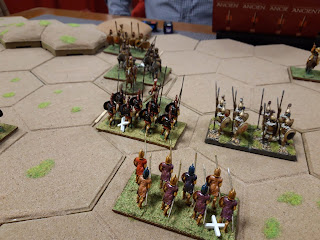 First blood to us, albeit not without losses. 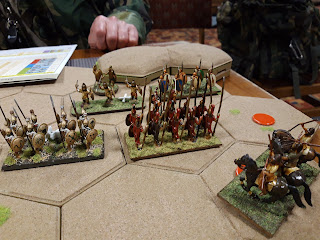 Over on the right, the Athenians tried to slip off the table (the red blobs are exit hexes), so Brasidas led his wing forward, supported by the cavalry. 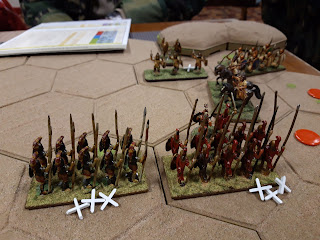 It was all very messy and horrible, but after a few turns pushing and shoving, to everyones amazement, the Spartans managed to destroy the required six units for victory. Despite monumental losses on individual units (see above) the Spartans only lost one.

Well, that was probably the fastest CnC Ancients game we've ever played. Not quite sure what happened there, but the Spartans managed to get stuck in very quickly while the Athenians didn't seem sure whether to fight or try to withdraw.  Oh well, home early at any rate.