Sadly, not a review of biscuits, but a trip to the stuggle for Italian Independance. After Garibaldi took Sicily in 1860, he marched north and met a large Bourbon force after crossing the Volturno. This is a vaguely bodged up scenario based on the engagement, Garibaldis enthusiastic Red Shirts against the reluctant conscripts defending the Neapolitan Ancien Regime.

Maps are a bit hard to come by for this engagement, so I just had some woods and valley snaking between rugged hills following the rail line north from Naples. Presumably Monte Cassino was somewhere nearby, but that was stretching my cut up carpet tiles a bit.

We played this using my grid based and simplified version of Neil Thomas's nineteenth century rules. John took Garibaldi, Tim C and Jerry the reactionaries. 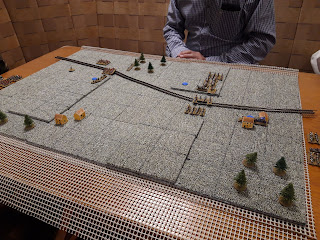 The rugged valleys of central Italy. Rome is off to the right, Naples to the left. The Neapolitan advanced guard and first division have pressed forwards along the railway. 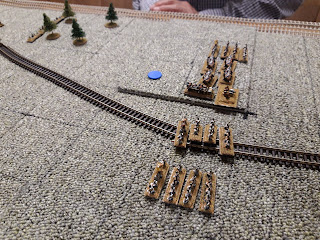 Three infantry brigades, artillery and a cavalry brigade. Two battalions of skirmishers have already occupied the woods in the distance. These are all my Irregular 6mm figures. The Bourbons look suspiciously like Austrians close up. Well, they are wearing white coats, that will have to do. 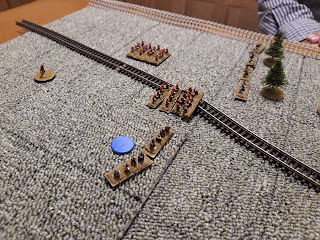 Garibaldis 1st Division, two brigades of Red Shirts and some Bersaglieri. Garibaldi is on his horse in the distance. 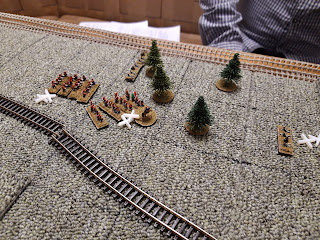 Garibaldi leads a charge to clear the woods, driving the Bourbon skirmishers back. 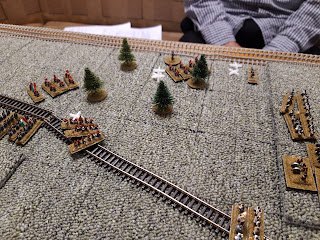 The skirmishers fail to disengage quickly enough and are overrun, however the rest of the Bourbon army is now moving into line. 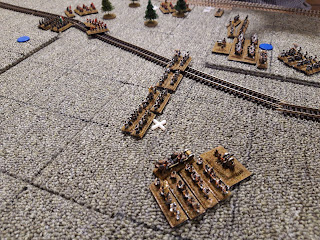 More infantry and artillery pull into line. The poorly trained Garibaldini weren't allowed to form line, but they were allowed to charge any and everything. 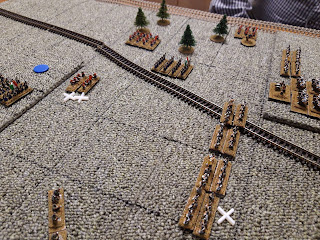 The Garibaldini have cleared the woods and their Bersaglieri are harrassing the Bourbon lines. The reactionaries position is starting to look quite strong though... 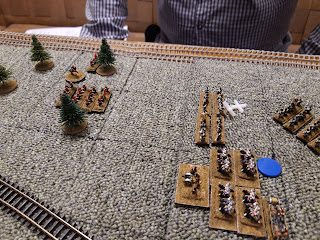 More Bourbons move into line. The central regiment is shaken by fire. 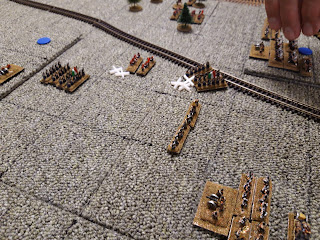 A lusty charge and the Bourbon centre largely collapses! Once the Garibaldini get the upper hand, the fragile Bourbon units melt away. The problem is closing against massed percussion muskets. 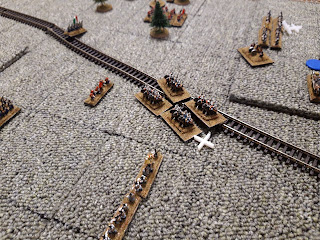 Sadly, the Red Shirts victory is short lived as the Bourbon cavalry put in a flank attack. 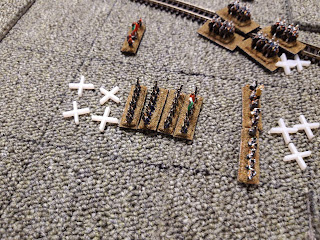 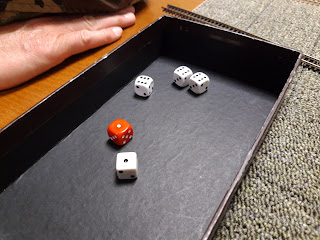 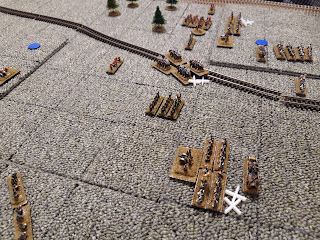 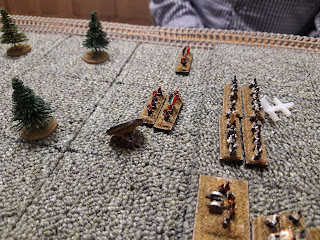 Invigorated by this success, Garibaldi leads his mean up the slopes. And dies in a hail of musket balls! 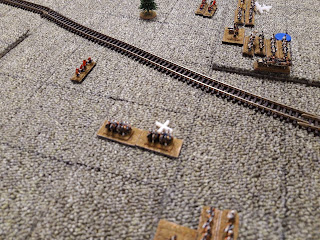 The add insult to injury, the Bourbon cavalry survive withering fire into their flank, and overrun another Red Shirt regiment.

We called it a day there as the Garibaldinis had run out of steam and the shaken Bourbons breathed a sigh of relief. Historically, Garibaldis headlong advance was stopped at the Volturno and he sued for peace, leaving Sicily independant. IRL he didn't die in the attempt though, so that is history changed once more.

I was please with how the game went, the modifications seem to work well and the game rattled along at a fair pace. I am tempted to use hexes in future as the squares are both a little small for deployed units, and produced some slightly amibguous results at times, but overall it was very satisfactory.