John put on his long planned Pegasus Bridge game on the 75th anniversary exactly, 5th June 2019 (although we didn't stay up until midnight for the correct jump off time!) . It was my first trip to the new club venue and I was pleasantly surprised by the spacious venue.

John had put loads of effort into the briefings, issuing copies of both the original orders given to Major Howard in March 1944, and then the revised intelligence briefings issed in May 1944. They were somewhat alarming, I hadn't realised there were quite so many tanks from 21st Panzer so close in nearby Benouville! 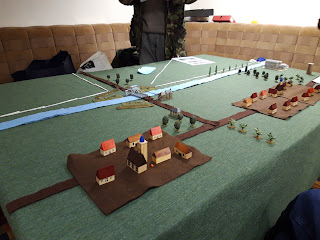 The table was laid out as the immediate area around Pegasus Bridge at a scale of 6" to 100 yards, with the Orne (and the bridge at Ranville) forming the far edge. 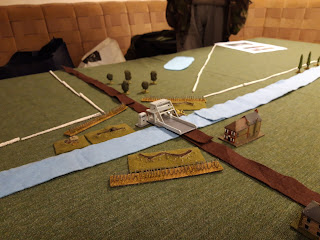 John had scratchbuilt some terrain especially for the game, including Pegasus Bridge itself. The external layout of the German defences was well known from air photography. In this case three trench systems, a concrete pillbox housing the demolition control gear and a static 50mm gun. 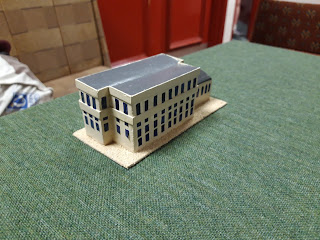 He'd also built this model of the nearby chateau (which will feature later in the engagement). 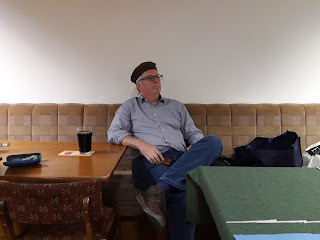 We'd all made an effort to source suitable hats, Tim had his Pay Corps beret. 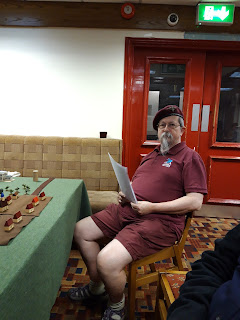 Jerry was in a complete maroon outfit and Para beret. 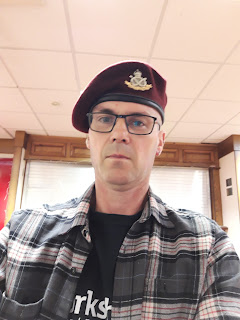 While I had my trusty South Staffs Air Landing beret. 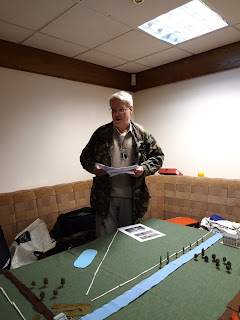 John did the initial briefing. We had 25 minutes to plan both the attack to take both bridges, and then to hold them until relieved. This included the loading plan, task allocation and building our own gliders. The latter also involved a few test flights into the target LZs (marked by pipe cleaners). 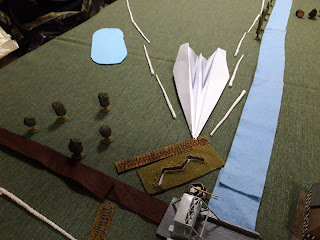 One we were sorted, off we went. No 1 platoon with Major Howard went in first, and managed to land smack up against the German wire as intended. 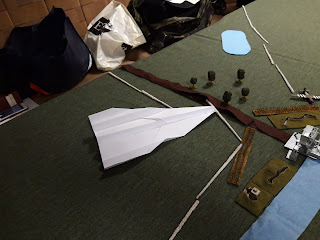 Tim also managed a decent landing, albeit a bit too close to the trees. 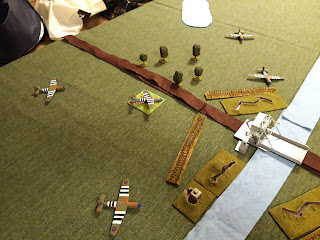 Eventually we all got down, 4 Platoon vanished somewhere in the direction of the Dives and wasn't seen until the next day, and my Six Platoon narrowly avoided crashing into the Orne. 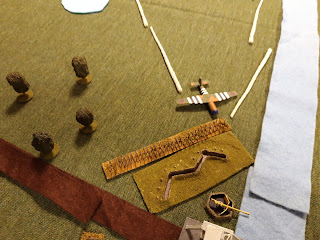 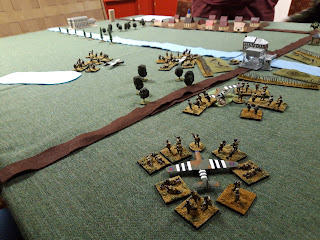 We all piled out of our planes. To cope with the overloading we'd left the 2" mortars and all non-essential kit behind. To allow for possible losses in the landing, we'd also split the sapper platoon between all the gliders, so every platoon had a few people who knew something about explosives. The also had some folding assault boats. 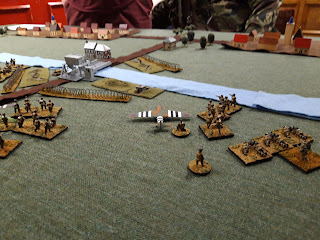 Richards No 3 Platoon included the MO. 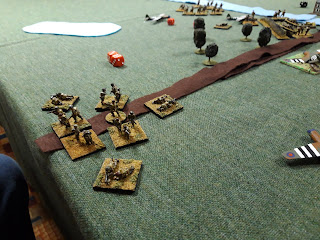 My platoon was tasked with taking the bridge at Ranville, so we set off down the road and put up an all round defence at the river bank having driven off the sentries and cleared it of explosives. Mission accomplished! 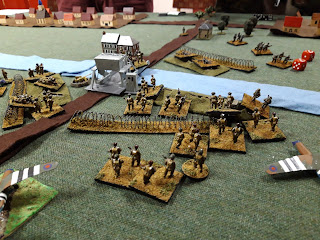 Back at Pegasus, Jerry, Tim and Richard stormed the defences. The East bank was cleared easily, but a sentry firing a flare pistol alerted the defenders on the west bank. 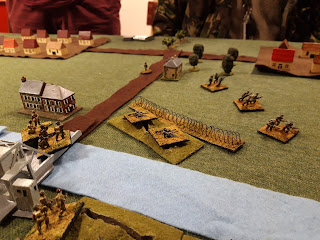 Many of the defenders sloped off at this point (Ostruppen), but their German NCOs were made of sterner stuff and manned a pair of MG42s. 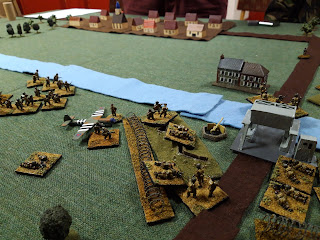 Tims platoon stormed the AT gun and found it to be undamaged. 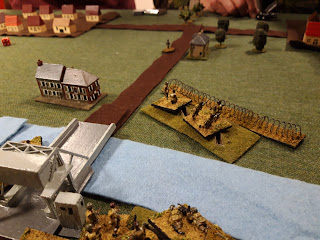 Jerry (and Major Howard) made short work of the MG42s. 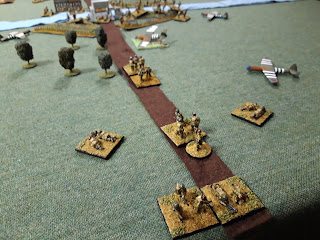 My chaps meanwhile intercepted a German staff car contained Major Schmidt, the garrison commander. He was very put out, and I sent a detachment to escort him to Company HQ for interrogation. 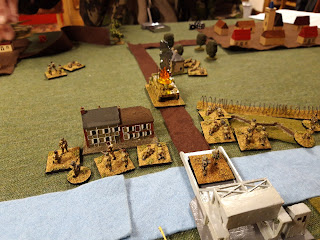 There was a certain degree of excitement when a pair of Pz IVs cautiously approached the bridge. One of our two working PIATs managed to knock one out, a good job as we'd left the Gammon Bombs behind at the last minute. The other withdrew. We captured one of the crew and it turned out they were from a local repair workshop and manned by repair crews. 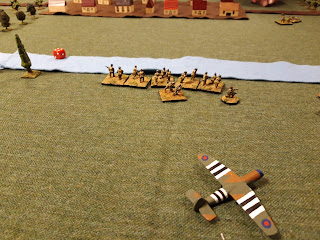 Tim C had meanwhile been patrolling to the south and came across some Italian prisoners erecting anti-glider obstacles. The words horse and bolted come to mind. The prisoners were sent away. 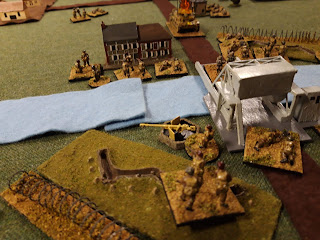 The destruction of the tank seemed to have put the Germans off a bit, although annoying sniper fire was coming from the south. We managed to get the AT gun working and started shelling suspicious looking spots. 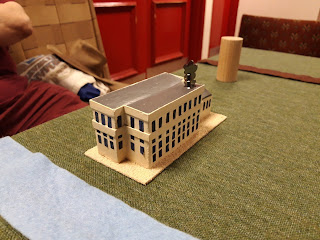 The Chateau came in for a good deal of fire, as did the water tower nearby. It didn't stop the snipers though. 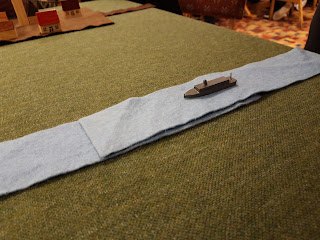 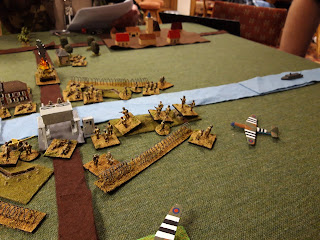 We managed to disable it with a PIAT and captured the crew. It was followed up by an attack by frogmen, who we drove off with rifle fire. 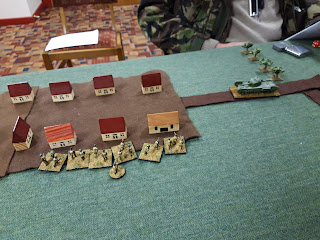 Tim Cs platoon pushed across the river to link up with Churchills pushing down from the north, as well as Lovats Commandos who marched to join us from the east. 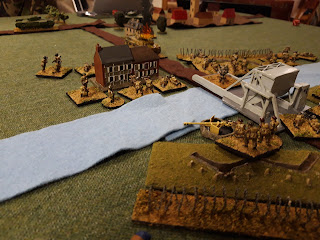 The final German effort was a boatload of infantry from the south, who were driven off with the AT gun. The Germans certainly put together a rapid response to our attack. irl the entire 22nd Panzer Regiment was assembled to obliterate 6th Airborne, but was then hastily diverted west of the Orne to attack Sword beach instead. So, good news for us. 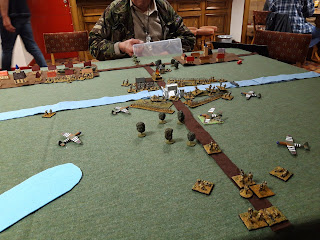 At game end we were firmly in control of the bridges and losses had been pretty light considering the amount of fighting. 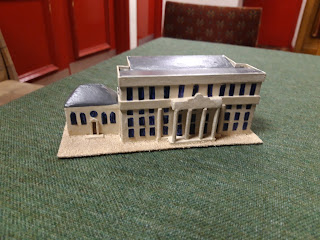 A view of the other side of Johns chateau.

That was a great game and a fitting tribute to the Ox and Bucks Light Infantry. Fairly light on rules, fairly heavy on umpire interaction so it really rattled along. Making us build our own gliders was a brilliant touch and the 'test flights' were suitably hilarious.