Well, this is a rare old beast, the BF-109T, the carrier version of the BF-109E. It was originally designed to fly off the Graf Zeppelin (and the carrier lifts were designed to be wide enough to accommodate the wings without folding). Essentially the wings, flaps and ailerons were redesigned to operate in a carrier environment and an arrestor hook attached.

As Graf Zeppelin was never commissioned, the planes were assigned to fighter units in Norway and Heligoland where their STOL capabilities proved very useful. Their performance was similar to a regular BF109E and they were eventually retired from front line service in 1943. 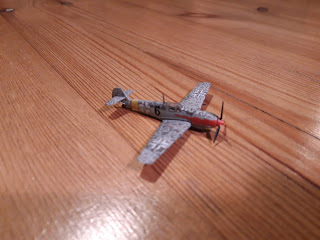 This model came courtesy of Mr Gow from last years club Bring and Buy, and is an exquisite 1/144th Hasegawa pre-paint. Well it says Hasegawa on the instructions, the rest is in Japanese.

It still needs assembly and has some microscopically tiny parts, but went together fine. 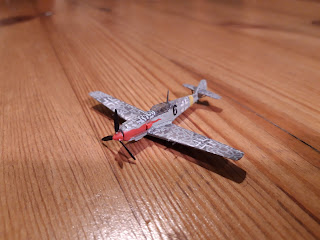 I do like its very intricate paint scheme, I'd have had trouble doing that myself. The antenna and tiny air intake beside the engine are but two of the microscopic parts. The parts fit so well there are few visible seams. The prop rotates, as long as you don't get glue all over it by accident. 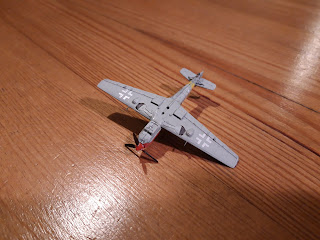 The join is a bit more obvious on the underside. The land based 109Ts didn't have arrestor hooks so I left it off. It also has some teeny tiny tailpane supports which I did manage to fit despite my sausage sized fingers. 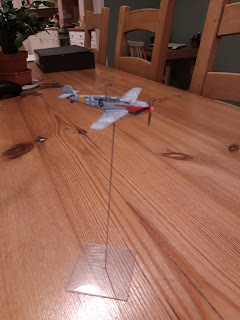 And off it goes, no doubt escorting some wicked German torpedo bombers attacking PQ17 or HMS Ulysses or something. A worthy addition to my ever expanding 1/144th plane collection.