While sorting to my 15mm interwar figures, I came across a very ancient SDD 15mm casting of the command version of the the Panzer 1. I think I must have bought this back in the late 90s when SDD were doing vehicles to complement the Peter Pig figure range, and I dimly recall buying it from their stand at Triples in the Octagon Centre. I've got a few other SDD castings, including some staff cars, a couple of Sdkfz 234/1s and an Sdkfz 251/1. Sadly my old SDD 25 pdrs and Quads were sold in a fit of madness along with the rest of my 15mm western desert stuff. What was I thinking!

Anyway, I thought this old warhorse could do with a bit of TLC. You can tell it s an old model as the photo is so grainy. 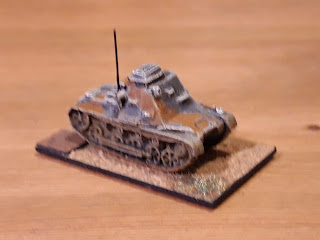 It was in a rather dubious paint scheme. I'd originally done it when I was fairly new to acrylics and 15mm vehicles in general. I thought it would be fun to do it in the interwar/early war panzergrey and rotbraun disruptive scheme so I slapped on some red brown over the faded panzer grey. I also added a radio antenna to makes it command role more obvious (0.5mm brass). 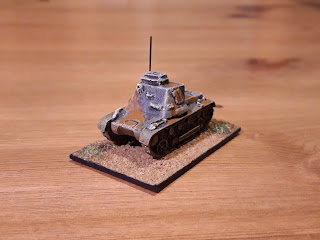 It is a fairly blobby casting, as was typical of a lot of early 15mm stuff. In fact it looks like it has a cast hull instead of the welded armoured box fixed to the chassis. It has got some engraved detail though. 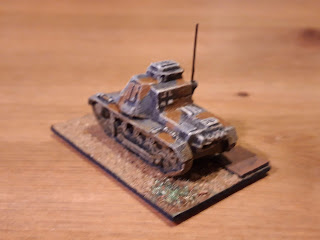 I was going to put some command platoon decals on it (II01 sort of thing) but the hatches were so raised it was impossible. In the end I just managed to get a balkan cross on the back of the turret. I then gave the running gear a good going over in mud, and did a light tan drybrush overall to blend in the new disruptive colour. 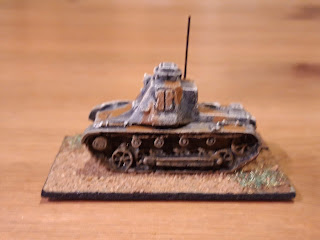 The dust highlight obscured some of the detail so I went around the hatch edges etc with a micon lining pen. You can see how rough the track castings are compared to more modern offerings in metal or plastic. 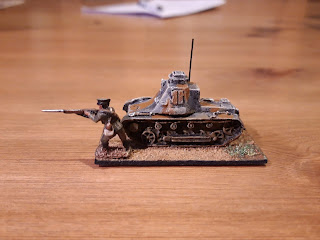 Meanwhile, my little tank will no doubt appear commanding a horde of Pz IIs or Pz 38ts or similar at some point. They were retired from panzer battalions in 1942/43 but hung around as armoured command vehicles, ammo carriers and ambulances until the end of the war.