Tim put on a game using an interesting new concept - Battle Cry with 54mm figures! The scenario was from the Italian Wars of Independance, in this case some of Garibaldis adventures in Sicily.  The Battle of Calatafimi was fought on May 15th 1860 betweens Garibaldis 'I Mille' and the Kingdom of Two Sicilies aka Naples.

The great joy of Battle Cry (and Command and Colours generally) is that you don't need loads of figures, to represent the units (although I usually go a bit overboard in the smaller scales), but that is ideal for 54s, especially for a relatively obscure period. 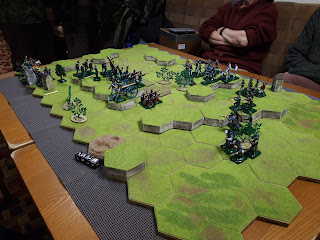 The battlefield from the Neapolitan side. 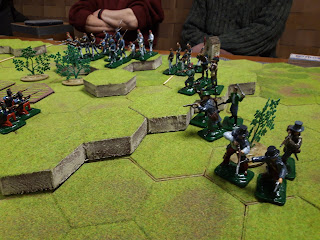 Garibaldis troops are over in the centre, and this bunch of bandits are in support. As you can see, the figures fit in the Hexon hexes fine. 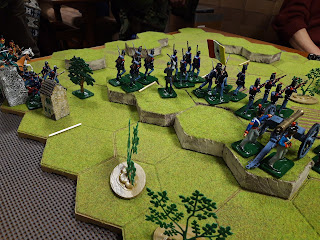 The main challenge is the vertical scale, as figures which are much taller than the scenery look a bit silly.  Tim made these special hill sections out of insulation board, and we used my Hovels 15mm Mediterranean buildings as they are tall but with a very small footprint. The only slight squeeze is the cannon, but it looks OK. 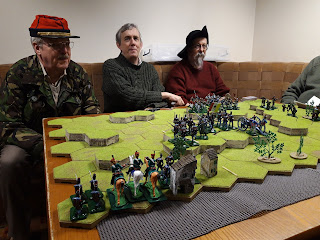 The rebels had an exuberant array of hats. Over on this side we can see the single Neapolitan cavalry unit. 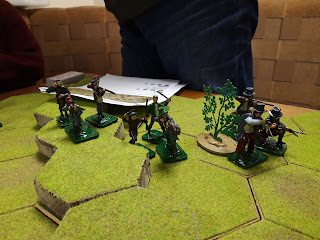 The bandits again, iirc these are repurposed defenders of the Alamo! In the real battle they sort of lurked around looking for opportunities. 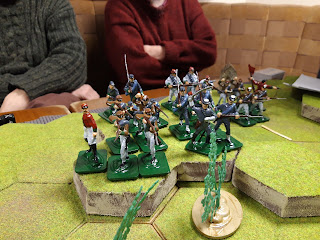 Garibaldis 1000 men. Bixio is in the natty red shirt and kepi, Garibaldi is a bit further back. These chaps are various ACW types as Kepis were a favourite form of headgear in the mid nineteenth century. 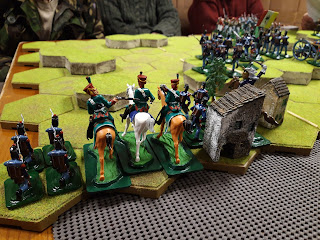 The Neapolitan reserves. In the real battle the action was largely over before they could intervene. The reactionaries were various Napoleonic figures, close inspection might reveal repainted British Infantry and French cavalry... 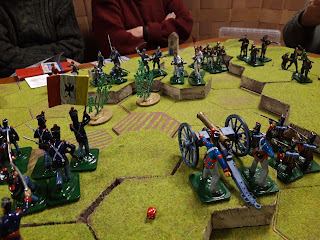 The Garibaldini got extra VPs if they captured two spots on the central hill (indicated by the red dice). The Neapolitan infantry were poor quality and had o retreat two hexes on a retreat result. this made quite a big difference. 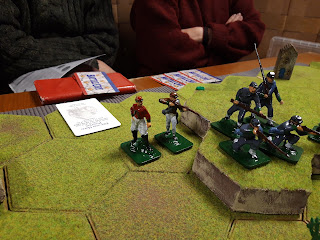 Battle Cry is a bit more leisurely than the later CnC games, and both sides ended up playing a lot of 'activate one unit cards'. The obvious choice was our cannon, which drove back and inflicted losses on one of the Garibaldini. 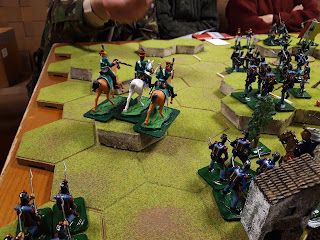 We had some slightly better cards and off the cavalry went, to occupy this hill. We were trying to get within charge range without being shot to bits in the process. 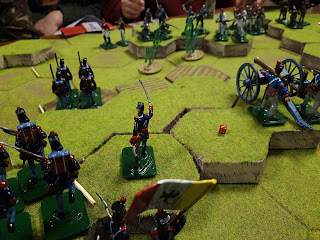 One of the Neapolitan units pursued the retreating Garibaldini and set off into the vineyards in the valley. 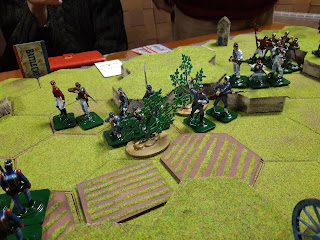 The rotten rebels occupied the woods on the other side. 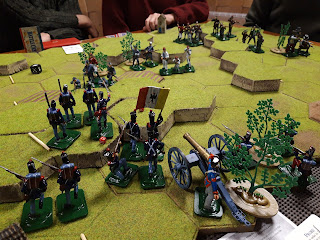 Their accurate musketry forced our cannon to rereat, there also weren't many gunners left. Ooer. The Neapolitans had all been driven off the front the the ridge. That extra retreat result was proving to be a real pain. 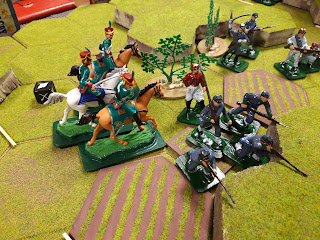 The cavalry attempted to intervene and charged the mass of rebel infantry. That went as well as could be expected and the handful of survivors fell back. 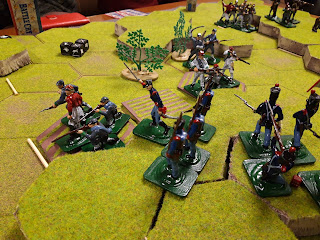 While the rebels were distracted shooting horses, the Neapolitans put in an unexpected counterattack (we finally got a decent cente card). 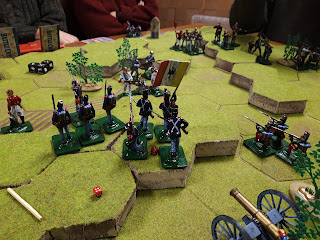 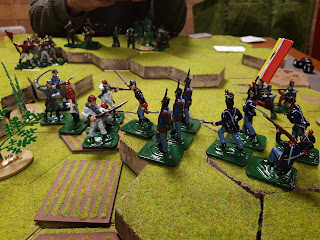 The victorious reactionaries continued along the ridge. 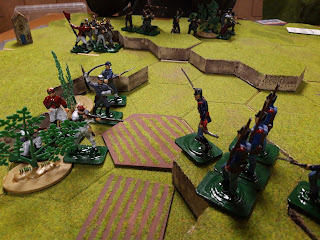 And pushed back even more rebels. They were all back in their wood now. 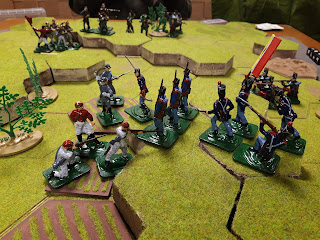 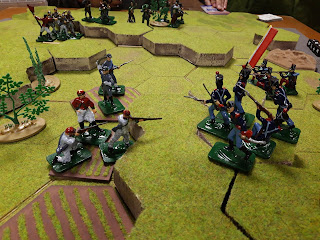 The leading Neapolitan unit was destroyed but their officer fell back to the supports behind. 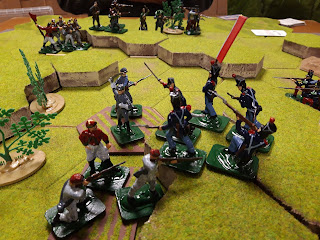 And in they went again. 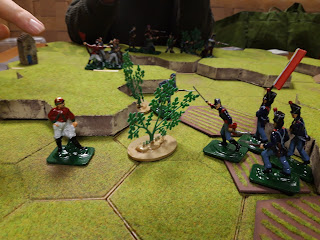 When the smoke finally cleared, poor old Bixio was left all on his own! That was all very exciting. 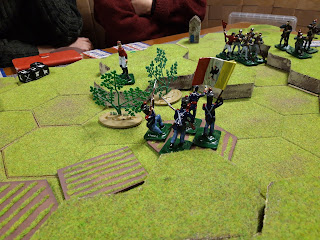 The victorious reactionaries pushed into the valley, trying to run down Bixio and get the last flag required for victory, but he skedaddled. 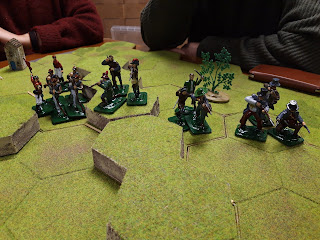 In an alarming development, the rebel left wing now activated as Garibaldi himself, and the horde of bandits surged forwards. 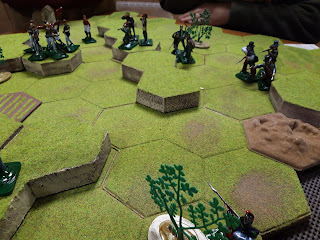 Garibaldini crested the ridge and laid down withering fire on the Neapolitans. Things weren't looking too good. 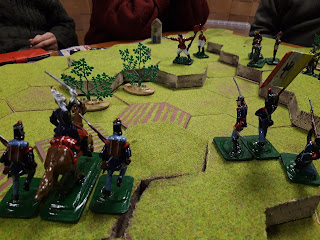 But in a stunning reversal of fortune the last reamaining Neapolitan infantry managed to shoot away the unit with Garibaldi, and he was left all alone on his hilltop.  Time for him to run away.

Well, that was a close fight. It was interesting to contrast the ebb and flow in Battle Cry with the later games, but it all worked very well and the players had lots of decisions to make. The 54mm figures worked fine on the Hexon, and were very pleasing the handle and manouvre.