As the virus disaster escalated I'd had conversation with Tim about what we might do from a gaming perspective - it is important to keep some social contact going even if we can;t meet up any more. Yes, there are various online gaming possibilities but we also both keen to do something involving toys and some direct social interaction.

Tim managed to organise a Matrix Game played over Skype, with him doing the moderation and pushing toys around on the table, while the rest of us watched the proceedings from afar and submitted our arguments/orders. Coralling six players over Skype in real time, and also making sense of the proceedings was quite an achievement and we managed to get things to a conclusion over tow nights.

The scenario was an old matrix game covering the battle of Stalingrad in 1942, with roles for Hitler, Stalin and assorted German and Russian generals including Paulus, Hube and Chuikov. As the most experienced players, Jerry and I were cast as Stalin and Hitler respectively.

Tim has already reported this game on his blog 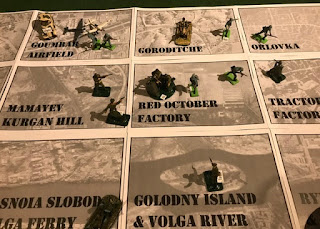 The map was fairly representational with named areas and various types of units scattered around. We could have used boring counters of course, but Tim used toys in a variety of scales. He we see Chuikovs attack from Mamyev Kurgan against the German defenders of the recently siezed Red October Factory.
Needless to say, things ended up not going so well for the Herrenvolk, but they gave the Russians a run for their money, pushing them right back into the Volga at one point before the 'succumbed to superior numbers and adverse circumstances' as the announcement at the time said.
Tim has provided an ample narrative already, and my personal objectives were:
1. ensure Stalingrad is captured
2. prevent any defeatist thinking
3. do something mad....

but for the delectation of people who haven't had much exposure to matrix games, here are the various arguments I submitted in my role as dear old Adolf. Just think how much these written insights into the thinking of the Great Dictator will be worth in years to come!

Turn 1
The Luftwaffe bombs the ferrieswith the result that the flow of Russian supplies and reinforcements is drastically reduced.This happens because:

Turn 2All German units make use of mission directed combined arms tactics With the result that they recieve a combat bonus against Russian unitsThis happens because:

Turn 3German reinforcements enter the cityWith the result that two extra infantry units arrive (one at Gumrak, one at Orlovka)This happens because:

Turn 4Soviet units in Mamyev Kurgan as disheartenedWith the result that they retreat to the ferriesThis happens because:

Turn 5The German units (from Orlovka) attack the Tractor Factory With the result that factory is capturedThis happens because:

Turn 7The Luftwaffe flies in signed photos of Hitler and extra detachments of GestapoWith the result that the German forces are inspired to greater acts of heroismThis happens because:

Turn 8All German infantry units attack the Russian units in frontWith the result that they capture significant areas in those zones, or at least try..This is because

Turn 9As it is November Hitler makes a speech to commemorate the Munich putsch:““That center [Stalingrad] I wanted to take and, as you know, we are modest — we have it!
There are only a few small pockets left. Now the others say: ‘Then, why do they not fight more quickly?
’ —Because I do not want a second Verdun. I prefer to do it with very small assault parties.
Time makes no difference here. No ship comes up the Volga any more. That is what is decisive!”

With the result that will to victory on the home front is boosted by the heroic sacrifice of the
Sixth ArmyThis happens because
Posted by Martin Rapier at 05:23