The Renault 35 was a light tank designed to replace the Renault FT in independant tank battalions and with over 1500 produced it was was most numerous French tank of the war. It equipped 21 battalions in May 1940 (along with eight battalions of Renault FT) and was also supplied to Poland, Rumania, Yugoslavia and captured versions were used by the Italians and Germans. A fairly ubiquitous vehicle then, although when I picked these up I was primarily thinking of their use in 1st Rumanian Armoured Div (where they served well into 1944, many upgraded with Soviet 45mm guns).

So, along with he rest of my recetn QRF order, I added two of these. I went with the short 37,, version as these were the most numerous, although I do also have some spare R35 turrets provided by Mr Gow, so I may have a go at building some of the R40 turrets with a long 37, which would also do for the Rumanian 45mm turrets, 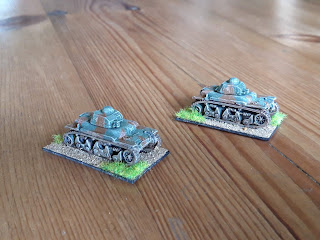 Here they are in all their tiny tank glory. For an interwar designed two man light tank they were astonishingly long lived and served in every theatre of WW2 in Europe. They thick armour helped a lot, and actually having a gun (unlike the poor old Matilda 1 which was very similar). 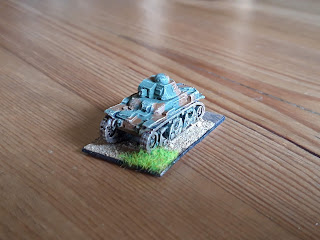 These are lovely little castings, very crisp and easy to assemble (just hull, turret and seperate tracks). The tracks are a bit unusual in that they are double sided, so you can stick either track on either side, but it keeps the complex suspension system delightfully open. 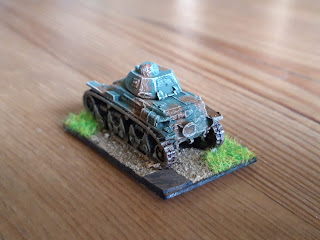 Engine deck, you can also see the neat casting of the rear turret hatch hinge. If I do make up some extra turrets I might brave doing a commander hanging out of the back. 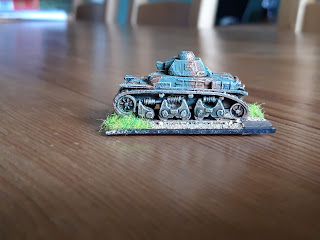 You can see the excellent detail on the suspension which really brings the tank alive it is just a shame that the side portions of the exposed track are a bit flat.

I spent a long time thinking about what colours to paint these. The original French R35s were mainly done in an exuberent factory paint scheme, while Rumanian R3s were in  a very boring mid green. I wanted to be reasonably authentic, but in my copy of Vauvilliers 'French Tanks and Armoured Vehicles' I noticed the H35 light tanks were done in a mid green and red brown disruptive scheme. This would do nicely for captured specimens in German and Italian (mainland Europe) service and would look close enough to a dirty Rumanian scheme for wargaming purposes as well as being a proper French scheme. So, green and brown it was, followed by my usual daubings of mud, dust and an inkwash on the tracks. Vive la France!