The Valentine was the most numerous tank produced  by Britain and the Commonwealth, and many thousands were sent to Russia where they were surprisingly popular. The Russians were a bit confused how to classify them and eventually decided they were light tanks. They were valued for their reliability and relatively thick armour. I fancied adding one to my Russian forces and went for a Mk III. As I only needed one, I went for a QRF one rather than a box of plastic PSC ones. 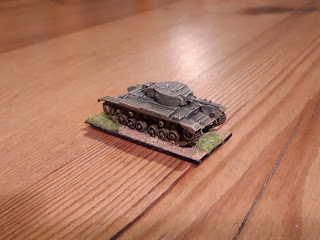 It is a neat little model and sits well. The turret is a bit loose but nothing a bit of blu tak won't fix. There was a bit of flash and a few mould lines but nothing major. 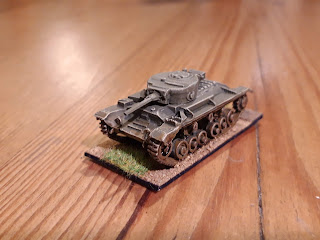 It comes with separate tracks and sandshields (which I didnt fit). The tracks went on easily enough, held in place with a bit of blu tak while they dried. 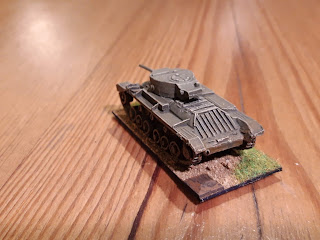 The rear engine deck has lots of jazzy cooling vanes, ideal for a wash and a dry brush. 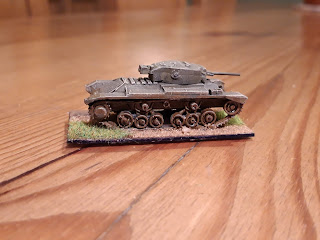 And off it goes. As usual now, I just painted the tracks and running gear in mud. I did the body in British khaki drab rather than Russian Green as I had in mind a scenario which also required a green British Valentine. I'm sure the Russians didn't bother to repaint them.

A nice little model, but for preference I'd get a plastic one as Zvezda do them too, but I was in a rush.