March to the Sea

Continuing our procession through games suitable for lockdown play, Tim  pulled out another classic, 'March to the Sea', covering Shermans campaign in Georgia in the American Civil War. This was another ancient matrix game, first seeing the light of day in 1995 I believe, and reputedly a Chris Engle original.

In the cast list, I drew General Johnson, commanding the Army of Tennesse at Cassville, while opposing me was Tim C as Sherman, commanding the Army of the Tennessee. All very confusing. My fellow Rebs included Richard and Jerry as dashing cavalry commanders with various raiding forces over in Alabama, while the plodding Yanks included Simon and John. John had managed to get his technology set up, so was able to join the game. 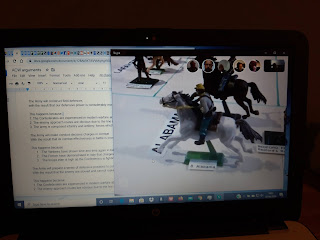 Although virtual games are fun to play, they aren't quite as photogenic as being  there! I ended up taking a series of photos of Skype on the screen. Here we see Jerry as Bedfords Raiders lurking in Alabama. 54mm figures and hand crafted map courtesy of Tim G. 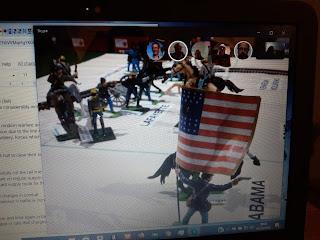 Our cavalry took an immediate dislike to the US railway line running from Nashville through Chattanooga down to Atlanta. At this stage I shall confess a shocking ignorance of the ACW, although my gaming pals all seemed very au fait with the proceedings as an earnest discussion about rail lines and the intervention of tornados in battles ensued.

Well, I've seen 'Gone with the Wind' and read 'The Red Badge of Courage' (and seen the very fine film too) so I had a bit of a grounding in what was about to pass. 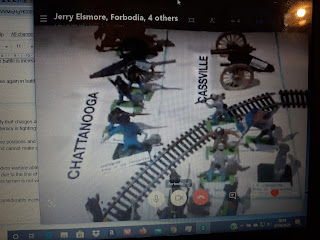 Over at Cassville my chaps made a half hearted attempt to dig in, but very unfairly Sherman and Schofield advanced towards us on a broad front. Fortunately they were rather sluggish, so nothing unpleasant occurred.

In June however, Schofield appeared on the left flank and the Union launched an attack on our positions which we repelled. In line with my orders, I prepared a series of fallback positions in order to fight a delaying action, taking advantage of our interior lines and superior mobility. 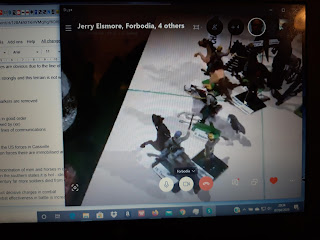 Meanwhile our cavalry bypassed the Yanks in fine style and set abut tearing up the railway lines. 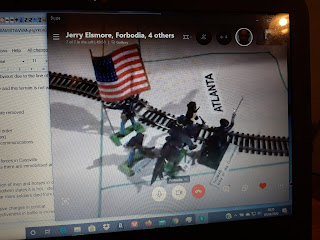 Sadly, Simons Army also neatly bypassed the Confederate cavalry and took up camp outside Atlanta! Ooer. I was still on the wrong side of the mountains facing Sherman and Scofield. 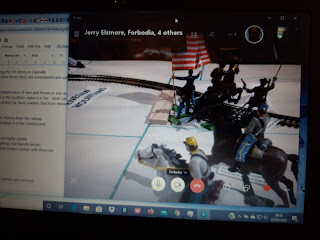 Bedfords Raiders bravely pursued them, but the Yanks took up defensive positions outside Atlanta. 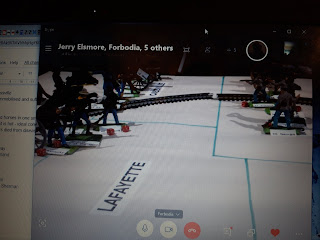 The next Union assault came in at Cassville and our prepared positions came into their own as we fell back in succession while delaying the enemy and inflicting losses. (note the red hit markers all over the Union forces). This was so successful we even managed to break contact with Sherman in the mountains. 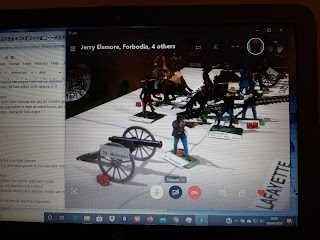 Meanwhile, back up the rail line, a horrible melee ensued around Chattanooga. Schofield lost interest in helping Sherman, and instead turned around to clear the Union lines of communications. 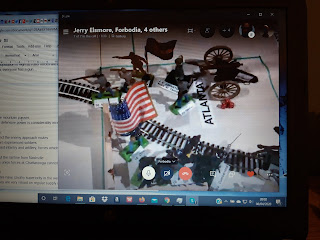 The Army of Tennessee used the railroad to travel back to Atlanta and launched an assault on the Yanks, who were by now partially dug in. Bedfords Raiders were ineffective operating in support. Luckily Sherman was lagging some way behind as they struggled through the mountains. 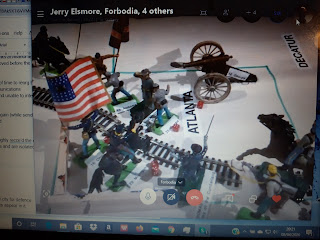 We had time to reorganise and launch another attack just as Shermans Army began to appear. The US troops outside Atlanta were looking quite ragged now. 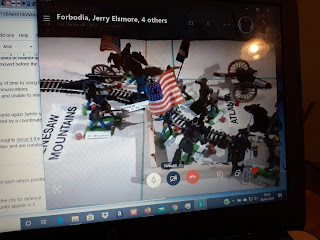 We launched a final assault as Sherman moved to engage, and the Third Battle of Atlanta turned into a massive battle. 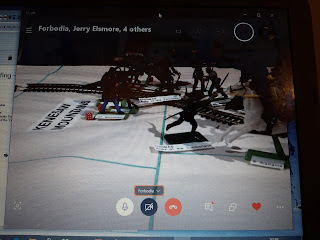 My Army spent much of its effrot holding off Sherman, but this time Bedfords Raiders got stuck in and managed to overrun the ragged US troops. 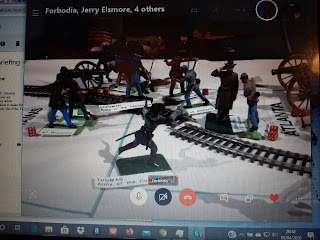 When the smoke cleared, the besieging US Army had been destroyed. My chaps were a bit tatty, but they'd held on and beaten off Sherman with some losses. Most important, we still held Atlanta, although as it had been fought over for three months, it was a bit of a smoking ruin by now.

The campaign ended at that point, and when we totted up the various objectives, the Rebels had done quite well although Sherman was clearly going to kick them out of Atlanta in Spring once the weather improved.

That went very well, we were all a bit more used to the virtual format and we did it in two short sessions over two days. Taking each player in turn gave it some structure and we rattled through it and reached a good conclusion in a reasonable length of time. As much of my day is now spent in video conference calls, I was glad not to overdo it in the evening as well. It was good to play with John as well, as he's missed a few weeks now. Many thanks to Tim for organising it.
Posted by Martin Rapier at 01:12