Don't cry for me Argentina, A Falklands War game

It is some  time since we ran this game, the earliest I can recall was in 2000 when I got to play Mrs Thatcher and had a very dubious relationship with General Pinochet! I've played this three times in total already, as Mrs T, General Haig and General Galtieri.

Tim brought this one out of retirement as another game suitable for remote play, and we assembled a full cast of characters. John was Mrs T, Simon was Adm Woodward, Richard was Pinochet, Graham was Haig, Pete was Reagan, I reprised my role as Galtieri and Tim C drew the short straw as the UN trying to keep all the belligerents apart.

My last outing as Galtieri made the headlines with the infamous 'Goose Green Gannie Grab', and I was determined on a different course of action this time. The only reason Argentina invaded the Falklands was to divert attention from the dire internal economic and political situation with a mad overseas adventure whose success hung on a thread. Offhand I'm sure there are one or two other examples of that aren't there Mrs T?

Anyway, this time the last thing   I wanted to do was fight a shooting war over the Falklands and get thousands of Argentinians killed. otoh there were some far less dangerous external threats lurking much closer to home... well, lets see how the new plan pans out. 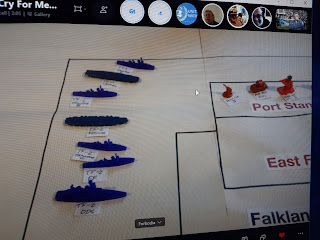 I spent the first couple of turns trying to abide by the UN resolution but only on condition the British held back. I'd have been very happy indeed to have a bunch of UN peacekeepers sitting on the islands, but both the British and US seemed determined to have a shooting war. I'm not quite sure why Ronnie was so determined to get two NATO allies in a war, but hey ho. Maybe Putin was intervening in US policy even then:)

The Task Force floated southwards and after a while, the RN was sitting in La Zona Exclusion Total. They do have a lot of boats don't they? 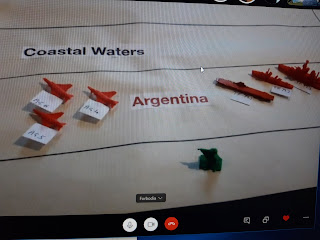 Meanwhile, the Chileans started conducting some highly provocative manouveres along out border. Just what I needed. Well, actually, it was. 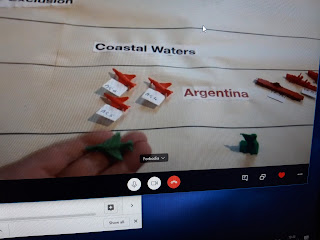 Now that war seemed to be inevitable I'd prepped the air force for long range shipping strikes and stripped some SSMs from our ex-US destroyers and flown them out to the islands. I was determined that I wasn't going to repeat the Argentine mistake of putting any major ships to sea. I'd prepared some other mobilisation plans instead. 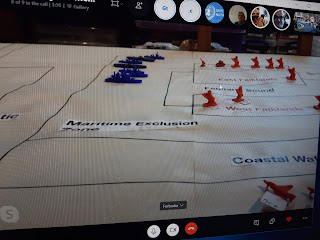 There were quite a few Argentine troops based in Las Islas Malvinas. 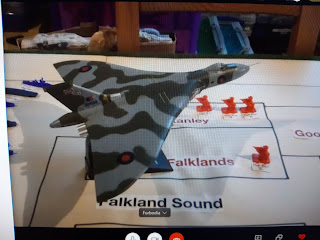 This nasty great Vulcan turned up and dropped bombs all over Puerto Argentina. 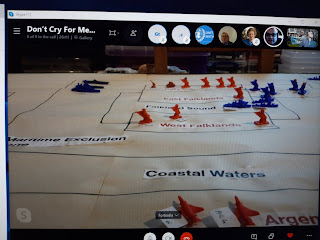 The British fleet sailed into the so-called 'Falkland Sound' and landed troops at Goose Green. This was cue for our air force to launch a maximum effort and we had considerable success with both Exocet attacks and iron bombs. The Sea Harriers took out some of our planes though. 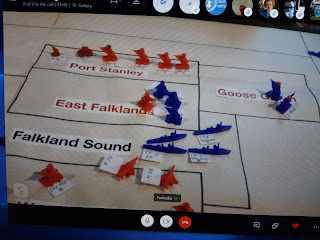 Bouyed by these successes, our heroic troops based in 'East Falkland' held back the first assault by the Royal Marines and Paras. That was a surprise result. With at least a couple of military successes to our credit, I had other fish to fry at this point. 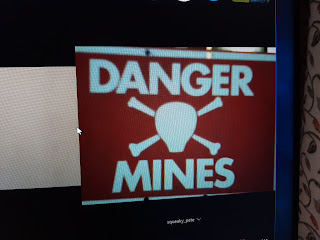 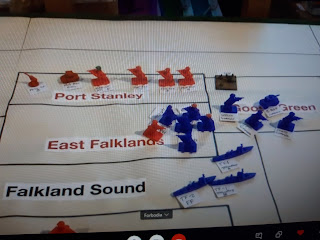 The British (aka Los Piratos Inglese) landed the Guards Brigade and the force ratio became rather overwhelming. At this rate though it was going to take quite a while for them to get to Puerto Argentina.

So, time for plan B. The Chileans were clearly itching for a fight, so having demonstrated out resolve in the South Atlantic, Argentine mountain troops moved up the border with Chile, the air force provided close support and Task Force 79.3 put to sea off the Chilean coast. This seemed to be very popular with the folks back home. Hurrah! 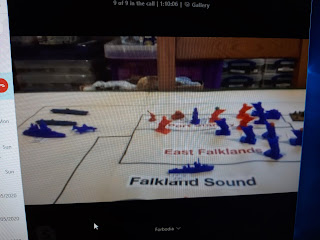 The final turn and it took the combined arguments of Thatcher, Woodwood and Reagen to finally get a British battalion into Stanley with Argentine troops still firmly in control of West Falkland. Result!

Having held off the British and the Chilean invaders and not lost a single ship, it was time for a huge victory parade in Buenos Aires which cemented the popularity of the Junta with the little people of Argentina. Viva Argentina!