I've already got one of these (a 50th birthday present) albeit a BF one, but it always seemed a bit lonely, especially as the authorised company strength was over twenty of them. Essentially a halftrack armoured car, and often woefully misused is a light tank (such as assaulting across Arnhem Bridge!) they were a key component of late war panzer recce battalions. 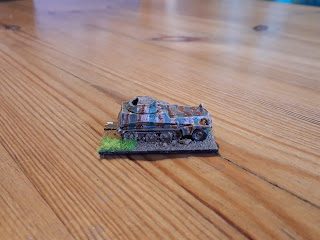 It is a very small vehicle on the Sdkfz 250 chassis, much smaller than an Sdkfz 243. It just has an Sdkfz 221 turret plonked on the back. 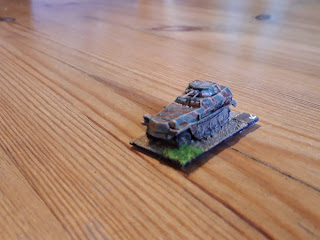 It wasn't too bad to put together, the front wheels wer pre moulded onto a nice thick axle so easy to glue into place. The turret was a bit fiddly (three parts with quite a complex gun mount casting) but the gun barrels are very thin and I guess it was the only to mould them. Unlike the BF one, the bottom of the turret is open, which is a shame. 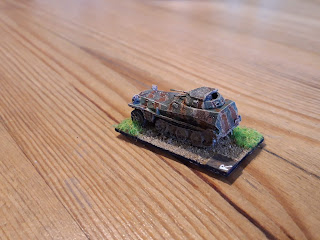 It is quite delicately moulded but the details are raised enough for a wash to run around them and lots of nice hard edges for a drybrush. The BF one has a couple of crew moulded into the turret, and I did think about adding some heads, but as I'd also have to build a base for the turret to stick them to, in the end I decided I couldn't be bothered. It looks fine without. 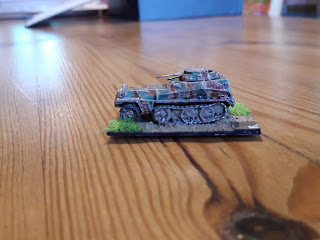 It sits OK. I did in the same sand/green/red brown stripe camo as all my late war German recce vehicles (based on vehicles in SS Wiking) and it got the usual daubings of mud, ink wash and dust drybrush. I didn't put any markings on as it is so tiny I'm not sure where Id put them.

It is fractionally smaller than its BF pal, but not noticeably so. Into the box it goes, but I do have a scenario in mind which requires two of these, so it may well be re-emerging sooner rather than later.