Ah, Nachod, how may times have I done this battle? It is one of my favourite battles of the Austro-Prussian War as Steinmetz's overextended Corps fends of Von Ramming with the 'cavalry' on the way to the rescue in the form of his second division. It is a perfect size to test Corps level rules, and an interesting scenario as the arrival of reinforcements on both sides swings the force ratios, while the extreme asymmetries of the Prussian and Austrian weaponry and tactical doctrine require very different tactics from each side.

John decided to put this on using an early version of Bobs Nineteenth Century Portable Wargame for one of our weekly Skype games. We had even more players than for Operation Goodwood, making it one of the biggest games we've tried so far, but this version used the 'playing card per unit' activation system so hopefully OK for multiplayer.

The scenario was based on the one in Neil Thomas's 'Nineteenth Century Wargaming' book although I usually use the version the Wyre Forest gamers did for their APW variant of Fire and Fury. The latter has detailed victory point scores for doing various things (mainly capturing particular geographic features) while Thomas's scenario doesn't apprarently have any obvious victory conditions at all apart from his usual one of beating the enemy through exhaustion. We had a further injunction to to lose our guns (something the Prussians had a particular horror of in 1866), but putting them at the back of our 50km march column kept them quite safe I thought! 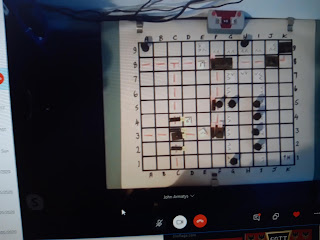 The general situation. Unfortunately a bit hard to make out on the monitor. There is  a wooded hill in the bottom right defended by half of Tims Prussians. The rest of the Prussians are coming on from the northeast. Bad Austrians are coming up from the southwest. 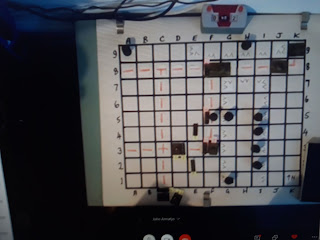 I have no great problem playing with squares but it is this sort of thing which drives me nuts. I usually allow ranges measured on square tables to include a single diagonal (thank you Peter Pig) which eliminates such silliness and means units can engage at range 1 all around. 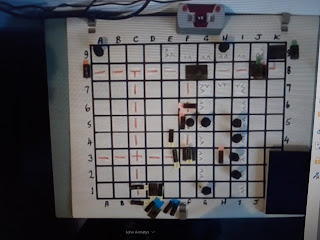 More Austrians are appearing and the Prussian cavalry turn up and promptly charge the flank of some Austrians. Again, more square related issues. Neil Thomas very wisely rules that you can't flank charge unless you already start behind a flank, but we rapidly found that flank charging was the way to go as there were no restrictions to stop you just marching past an enemy unit, wheeling and getting stuck in. We were probably too spread out. 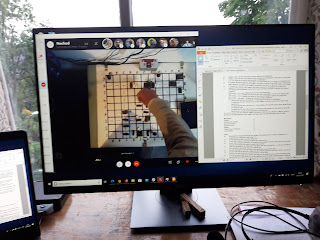 The genuine remote gaming experience! The 'hand of god' moves stuff on the table. 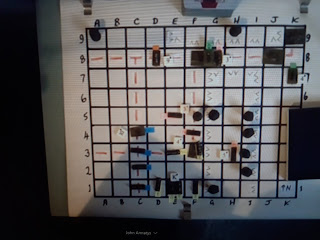 More Austrians and Prussians roll up. One issue with the geometry of this battle is it is fought Northwest to Southeast, which doesn't work very well with a square grid where you can only face north, south, east or west. Whichever way units turned, they always ended up exposing a flank. Tim C decided the way around this was the standard boardgamers 'table edge creep' and his guys crept along row 1 right at the bottom. I guess re-orienting the map so we fought along the grain might have been a solution. 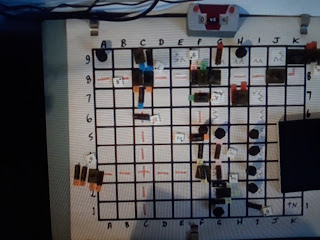 The action is becoming general as the Austrian Corps artillery and Simons brigade engage the Prussians from the northwest. One thing which was working OK was the melee rules. One thing I've always thought a bit odd was the way in the PW it is more effective to fire (if you are stationary you hit on 4+) whereas the basic to hit in melee is 5+. With the flank attack modifiers, melees usually got a 4+ from the flank while the defenders only hit back on a 6. This encouraged flank attacks and discouraged frontal ones. Very clever and I'd missed this design feature in our WW2 playings. 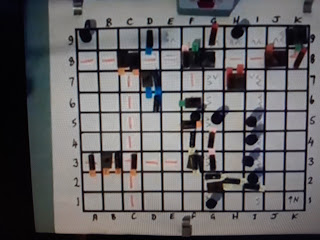 My chaps (the red ones) are all coming on now. After a staff conference we decided to attack in the north, while hard pressed Tim fell back in the south. Shortening the front was the only way to counter the superior Austrian numbers. 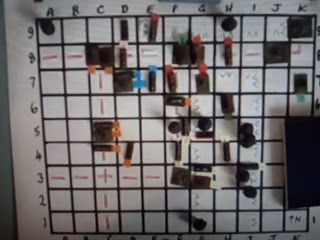 My guys piled due west, joined by one of Tims regiments and we got stuck into Simons brigade and the  Austrian Corps artillery. I put my General in the middle supporting all the orthogonally adjacent units. The close range needle gun bonus and General bonus all helped, and the Austrians hadn't figured out that stacking their Generals with each unit just meant they died faster so we rapidly obliterated them 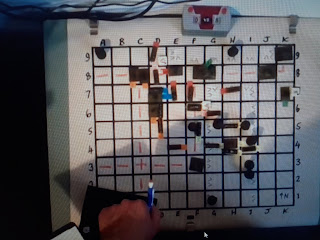 More of this went on for a while. I sent a couple of units to hold up the Austrians moving from the south but we mainly turned our attention to the Austrians sitting in the open to the northwest, concentrating on their weaker units with the war winning move/fire/charge plus general bonus combo.

After a few more turns of this the Austrians became exhausted and the game was over. The Prussians still had two exhaustion points in hand, so it was very much like the real thing with the Austrians beaten but the Prussians in need of a bit of reorg before marching off to link up with the rest of 2nd Armee.

That all went pretty well I thought, and some of geometrical oddities are easy enough to fix and common to all square grid games. I do like the exhaustion point mechanism in PW, it stops sides fighting to utter destruction (a downside of some of the Neil Thomas rules) although in both cases they are just a means to an end. I'm not convinced about the quality differences in PW though. One of the interesting things in the APW are the asymmetries in infantry tactics and weaponry, and the Prussians generally inflicted a 4:1 loss ratio in infantry combat, which didn't really come across here. Conversely the Austrian artillery was vastly better (and numerous), which again wasn't really reflected, although their guns did actually managed to fire in the game, unlike the Prussians who just tried to stay out of trouble.

If you want to try the scenario yourself, JOhn has posted it on the Portable Wargames io group:
https://groups.io/g/PortableWargame

I'm tempted to try another APW or FPW scenario using the published Portable Wargame rules,although I recently picked up a copy of Bobs 'Portable Napoleonic Wargame' and the Corps rules look like they may work OK for this period. Something to mull over anyway.