Simplicity in Practice. Squared and 1866'd

I've already converted Neil Thomas's Nineteenth Century rules for squares, so I thought  may as well do the same treatment for his Simplicity in Practice rules, and do an APW/FPW variant as well.

I tried it at the club using my 6mm APW figures and my ancient old gridded carpet tiles, originaly set up for Minischlacht. The scenario was one of may favourites, Nachod from the Six Weeks War. Von Steinmetz leads his Prussian Corps over the mountains and into an Austrian Corps in a classic encounter battle. 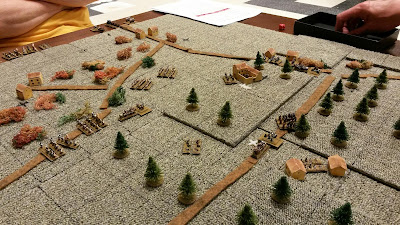 The Prussians are coming in from the top right. The Austrians assembling along the road from the left. 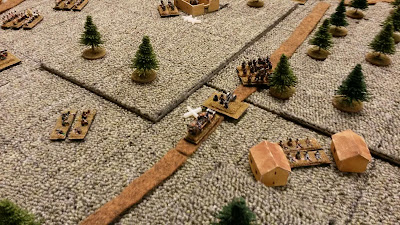 Nasty Austrian Jagers ambush the Prussian artillery (it really shouldn't be at the front of the column!). 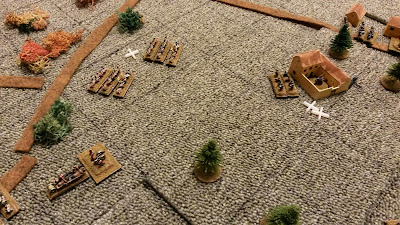 The Austrians line up to assault the Wenzelberg, they key feature of the battle, 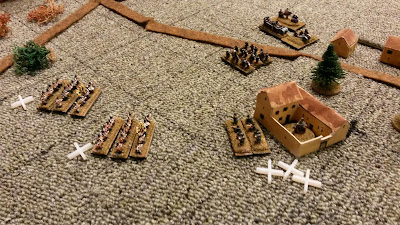 It is all very unpleasant with casualties galore. Steinmetz lurks in the courtyard. 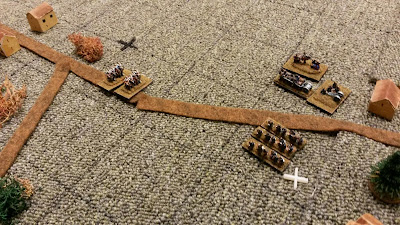 Prussian infantry poised to counterattack the Austrian flanks while some Austrian cavalry put in an appearance. 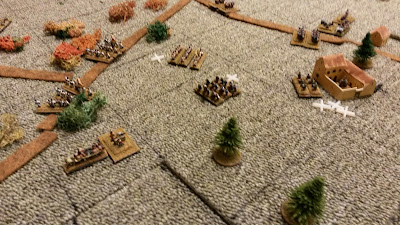 The Prussians manage to drive the assault off.

I've played this scenario many times before with a range of various rules, but this was all a bit scrappy and unsatisfactory. The roads in particular were just confusing and got in the way. I don't like games at this level which bother with road movement, and coupled with the NT style turn restrictions and grids it was too confusing and gamey.

The combat system worked OK and using a grid instead of big unit bases worked alright, but the whole thing just didn't gell. So, back to the drawing board with that one, but nothing ventured nothing gained!
Posted by Martin Rapier at 00:12