Somewhat inspired by the Portable Wargame a few weeks before, I thought I'd finish up a couple of silly Russian 15mm projects that have been lying around for a while.


First up, the mighty Zis-2 57mm AT gun. Not that silly perhaps, but I always thought the barrel looked disproportionately huge. 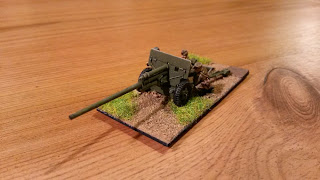 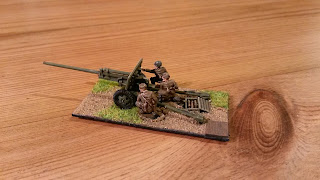 This is one of the PSC 76mm guns made up with a 57mm barrel. A nice simple model which looks the part and paints up well. John kindly donated this as he had a spare.

Next,  a command bus for the Russians. This was inspired by a photo I found of a command vehicle based on a Gaz AA in 1944 where the occupants had essentially built a garden shed on the back of the truck. They looked so happy with the monstrosity they'd built, I thought it deserved commemorating. 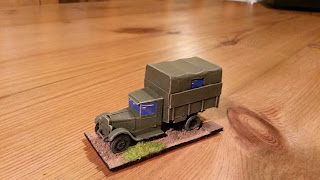 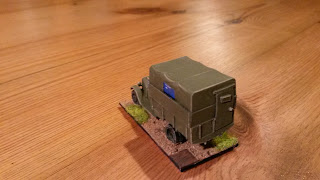 Essentially I just added a 6mm extension piece to the edges of the rear bed of a Zvezda Gaz AA truck, plonked on the tilt and made up a window and rear door from plastic card. It looks rather more professional than its real life counterpart! I'm sure the HQ chaps will welcome the ride.

Next, that triumph of socialist labour efforts (helped by a spot of spying on the Vickers Independant), the T-35 Land Battleship. 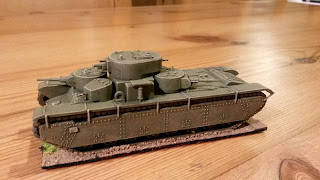 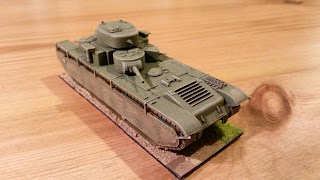 This is a truly monstrous model. I did have go at doing the radio array but it just fell to bits. Well, it was an optional extra anyway. I left it fairly plain (the supplied decals also fell to bits!) but I'm pleased with the weathering on the side panels, which is a mixture of mud and dust.

It has no less than five moveable turrets, which lets it shoot in all sorts of directions at once. Lack of central fire control must  have made that an interesting experience in real life. 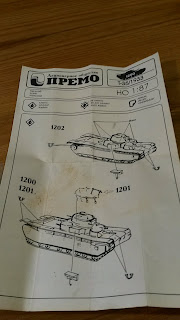 None of your Battlefront or Zvezda rubbish here. This is a proper Premo model, with the instructions in Russian. Which makes them a bit hard to read, so it is a good job there weren't too many parts.

Finally, I thought the chaps could do with some encouragement in the battle to defend the motherland from fascist oppression. I knocked up this chap with a megaphone to bellow out suitably comradely messages of inspiration. Well, I blame Enemy at the Gates. 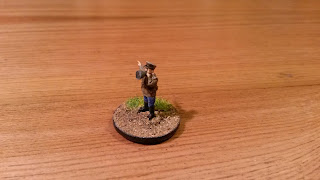 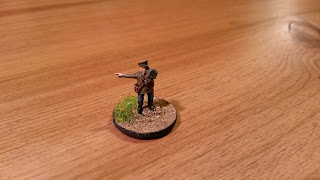 He is a PSC 'pointing and shouting' Russian officer with a megaphone made up out of scrap plastic.

I rather enjoyed making all of those, and most of them will hopefully be gracing a gaming table in the weeks to come. I've even found a decent scenario to use the T35.