I came across this scenario on another blog and thought it would be ideal to playtest Blitzspiel as it featured a bit less kit than the last game. It features a company of the Green Howards and two troops of the Royal Dragoon Guards vs elements of the 352nd Inf Div Fusilier Battalion and Panzerjaeger Battalion as the british push inland towards Bayeux on D-day.

I ran it on a 4x4 table (800m x 800m) with the German defenders hidden. John took the British and von Gow took the Germans. 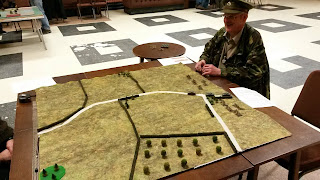 John brings on his leading platoons. This game was also an excuse to try out my new Deepcut Studios 'scrubland' game mat. I made up the ridges either side of the road using hexon tiles and laid the mat over them. It draped very well as it is quite thin. 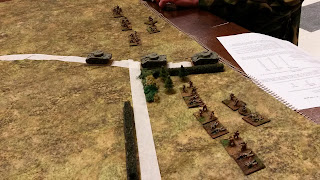 The British infantry tanks and infantry operating independantly. All that training in England wasted! 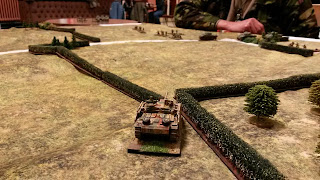 A Stug opens fire from behind the hedgerow, and unfortunately misses. 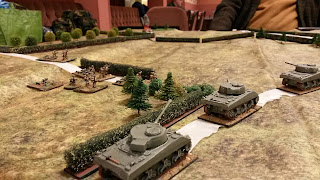 The Shermans make no such mistake and their return fire turns the Stug into a column of smoke. Meanwhile the British infantry press on alongside. 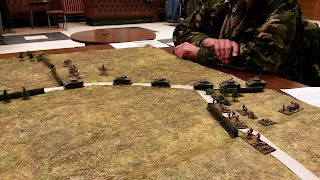 More Shermans roll on as the British infantry pushes on to the far hedgerow. 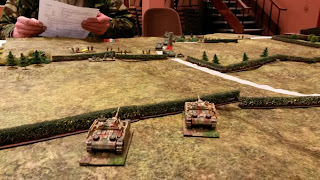 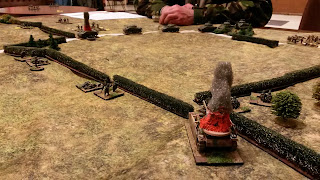 A pair of tripod MG42s lay down a devastating crossfire on the British infantry crossing their front on the other side of the valley. The new 200m beaten zone for tripod MGs was really nasty here. 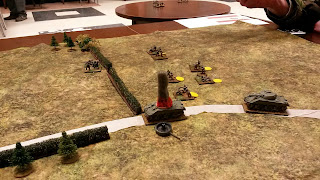 The platoon suffers a several casualties and the remainder are pinned. A German rifle section emerges from behind the hedge and takes pot shots at the survivors. 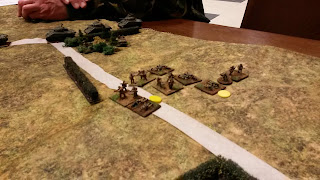 The other British infantry platoon is largely pinned by long range LMG fire. 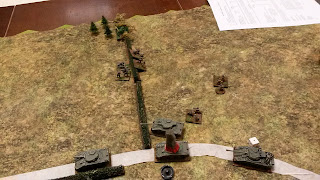 Things were looking a bit sticky at this point, however the firepower of the remaining Shermans slowly began to turn the tide. The German advance guard and tripod MGs were suppressed and the surviving Britihs infantry assaulted the hedgerow. 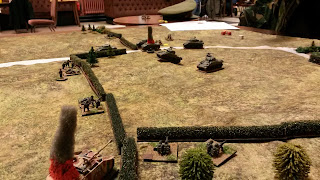 The other Shermans pressed on under a hail of MG fire which neutralised one tank. More Germans emerged from their hiding places. 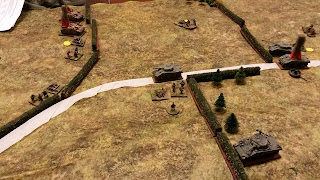 Perhaps more importantly, both the remaining Stugs were knocked out without any further losses of Shermans. The Germans were a touch unlucky here and might have been better siting their guns with more restricted fields of fire and aiming for flank shots. Easy to be wise after the event though. 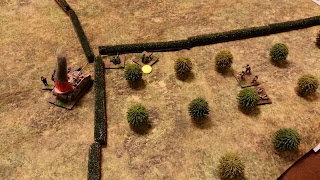 Over in the orchard, a British rifle section stalked the suppressed MG teams. 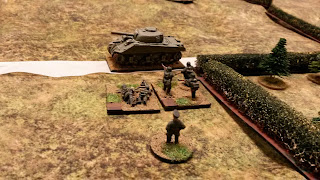 Down on the main road, one of the German rifle sections fired their brand new panzerfaust at a Sherman, egged on by the platoon commander. Only to miss completely. 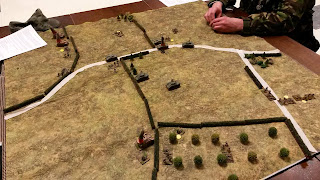 We called it a day at that point. The remaining defenders were pulling out, but the British infantry had suffered a bloody nose with only their reserve platoon intact. Without effective infantry support the Shermans weren't going anywhere in the ever denser country.

The game rattled on  at a fair old pace and we got through the whole thing in an hour, which was great. It just plays much faster than Platoon Commanders War, which is what John was after. In the washup I felt that the British would have benefited from closer infantry-armour cooperation as the tanks and infantry fought virtually separate battles. John had decided to dash for Bayeux though, and so kept his tanks concentrated, which worked very well in the tank battle, but less so in mopping up the German infantry. John noted that we were thinking in terms of platoons and troops rather than worrying about the manipulation of rifle groups etc which was what he was after from the design. So all in all, very successful.