This was the next in my sequence of WW2 desert games. I'd been tempted to jump straight to Operation Crusader, but I thought I had to give BattleAxe a go. I'd run the whole battle before using both Megablitz and Rommel, but there was an interesting scenario in 'Benghazi Handicap' covering the battle for Fort Capuzzo. Fairly low density so suitable for the NBC treatment. 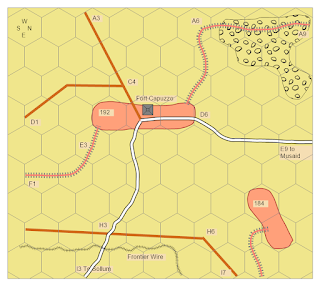 Here is the battlefield, right on the Egyptian frontier. The fort was designed to cover the coast road, and the dense frontier wire was a short distance away. The Italians used it as  base for patrols out into the desert to keep down the Senussi. North is right, south is left. 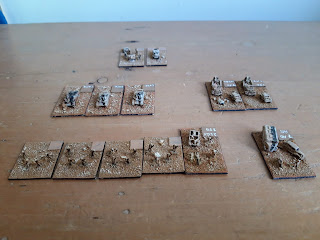 The British. 1st Buffs, 7th RTR, a portee battery of 2pdrs from 65th AT Regiment and a batteru from 31 Field Regiment, RA. These chaps had taken the fort the day before and already beaten off a hasty attack by 15th Panzer Div. Simon and John took these. 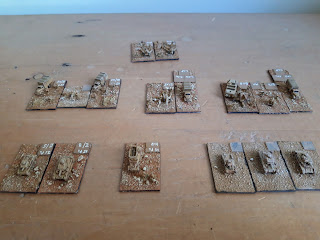 The Germans. Kampfgruppe Cramer, 15th Panzer Div. I and II battalion, 8th Panzer Regiment, I/104th Schutzen Regiment and a company each from 33rd Panzerjaeger and Flak Battalions and a battalion of 33rd Artillery Regiment. All the German units are understrength after the lengthy siege of Tobruk. Tim, Tim and Jerry took these, with Jerry in overall command. 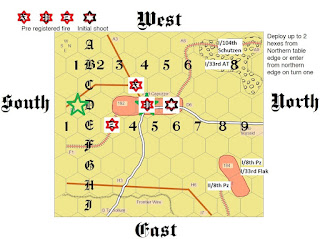 This was the Germans very efficient planning map. I would expect nothing less from the cream of the Panzerwaffe. The players spent some time beforehand planning, which involved various emails and even some conference calls. 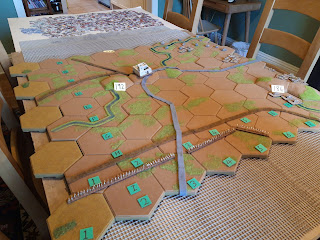 Battlefield from the east. I marked a rough hex grid up with some green counters I'd made. 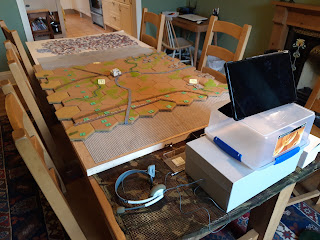 My 'home studio' for running remote games. A pile of boxes with my tablet on top. This does work but that is about the maximum table size the camera can cope with if I don't move it around. 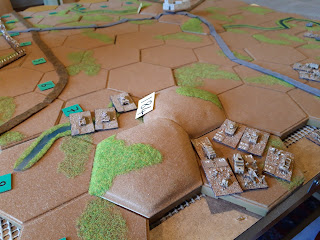 The panzers set up clustered around Hill 184 supported by the Flak. Tim had cunningly hidden II/8th Panzer in the wadi in front of Hill 184, relying on their veteran driving skills to get out again. 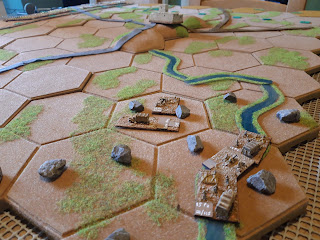 The sneaky Schutzen set up in this wadi, hoping to use it as a route through the broken ground, again, rolling D6 for movement really helped. 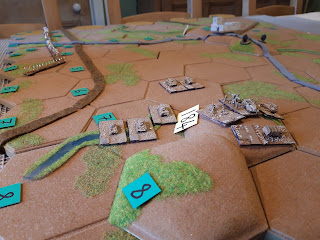 The Panzers and Flak set off. II/8th Panzer discovered that wadis can be hard to get out of and got a bit stuck, despite being veterans. 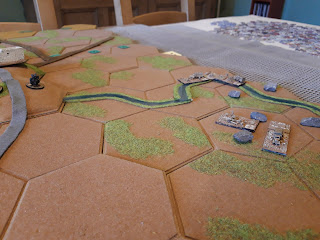 The Schutzen made good progress down the wadi however, covered by the Pak 38s. 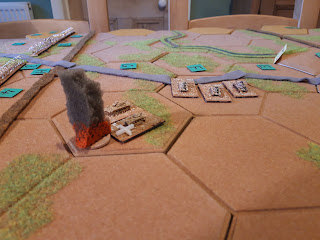 I/8th Panzer discovered 7th RTR parked on the road. In the exchange of fire some Pz IIs were knocked out, in a curious mirroring of history (FM Lord Carver complained British tank crews tended to concentrate on the relatively ineffective Pz IIs as they were more satisfying to engage!). 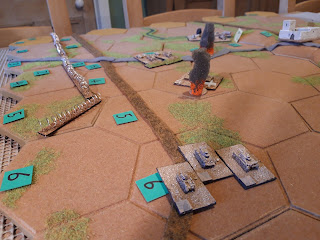 II/8th Panzer made it out of the wadi and set off down the track beside the Egyptian frontier. Being just a desert track, it only gave a minimal movement bonus to tracked vehicles.

Meanwhile I/8th Panzer had discovered 65 Artillery Regiment, RA. Sadly the 2pdrs were rotten shots. The 88s managed to hit some of the Matildas and they fell back in disorder to the wadi where the Brigadier drove over to them in his Dorchester. 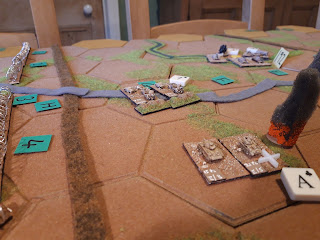 I/8th pondered what to do about the 2 pdrs now the Matildas had gone. But with an Ace of clubs, there was only really one thing to do. 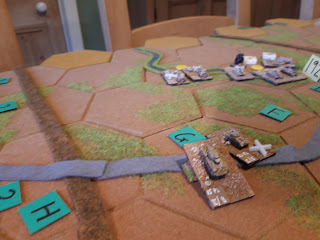 Charge! The panzers advanced in fine style firing as they went, and broke into the British AT position with few losses. The 2pdrs fell back in disorder to join the Matildas in the wadi. 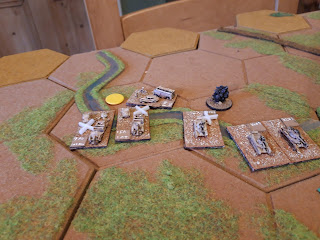 Back in the wadi the Brigadier rallied the Matildas and moved over to help the 2pdrs. German artillery landed around the British tanks. There was still no sign of any British infantry. 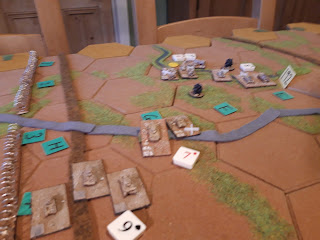 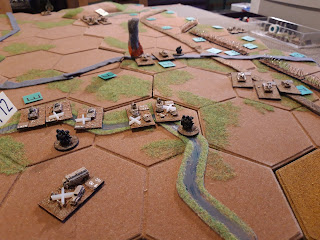 The British had manged to rally all their units now despite the harassing German artillery fire and the Dorchester ACV set off across the desert. 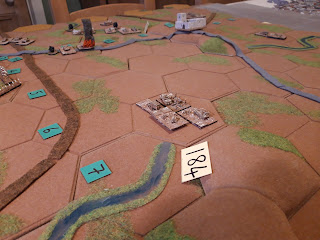 The Flak moved up from Hill 184 in support of 8th Panzer Regiment, accompanied by Oberst Cramer. 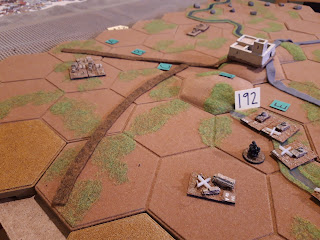 Meanwhile I/104th Schutzen had managed to move right around the fort without attracting any attention. The objective at D1 was within reach! 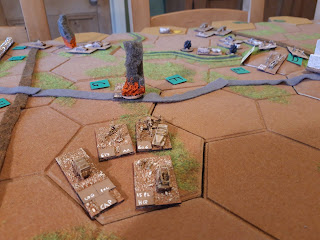 The Flak set up near the coast road to cover the panzers. The flat desert here was perfect for the 88s. 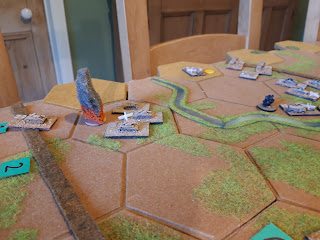 The panzers pushed as far to south as possible then swung west. Long range fire from the Pz IIIs and IVs hit some more of the 2pdrs and they once more fell back in disorder. 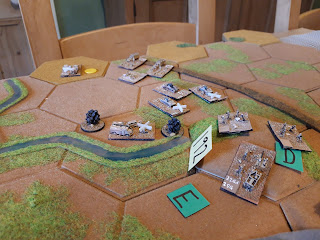 British infantry and carriers finally emerged from their concealed sangars and slit trenches and moved over Hill 192. 7th RTR passed their morale test and tried to overrun I/104th Schutzen. 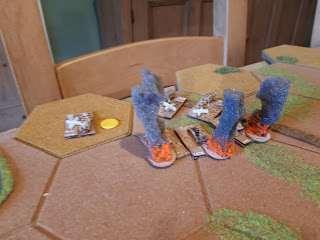 Oh dear! 7th RTR reduced the I/104th to a single company, but the German infantry had balls of steel and not only passed two morale checks (being overrun by tanks in the open is bad) and proceeded to knock out all the remaining Matildas in the close quarter battle! Blimey! 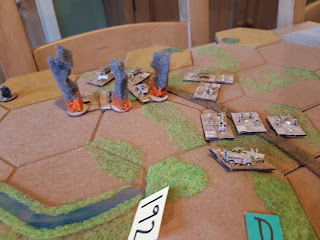 The last 2pdr was knocked out by German artillery, but 1st Buffs were undeterred and headed for the German infantry. 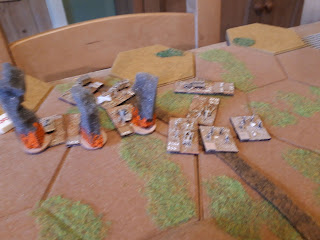 In this slightly shaky shot they wiped out the German AT company without loss. 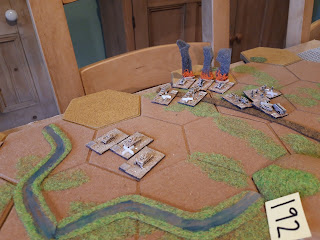 And then headed for the handful of surviving German infantry. 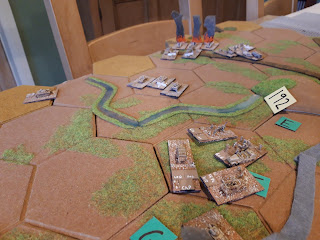 Sadly the 88s had other ideas and managed to pick off the Dorchester from a mile and a half away. The Buffs shrugged this off. 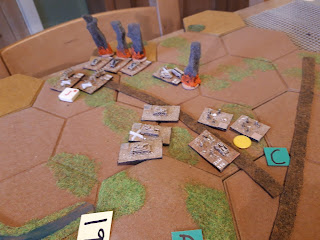 Just as they were poised to overrun the German infantry, their nerve broke and they fell back towards the fort. II/8th Panzer saw their chance.... 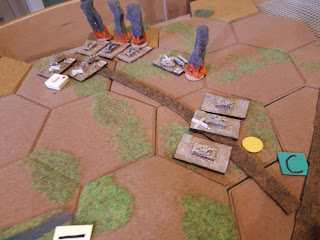 And overran them as they fell back. Their morale collapsed and they surrendered. A very close escape for the handful of German riflemen and a sad end for the British infantry. 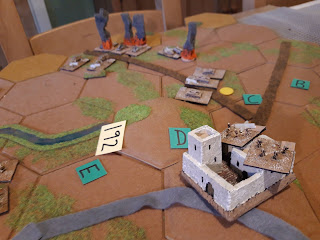 Time ran out at the point with the fort still in British hands but the Germans in control of their LOC, so the two surviving companies would have broken out overnight.

The game clock ran out at a suitable point and the Germans were able to claim victory as they'd surrounded for fort and destroyed all the units outside it. Their infantry had suffered brutally, but their armour losses were relatively light. If the Buffs and 7th RTR had been a bit more fortunate it could easily have swing the other way.

IRL the British actually won this battle, Cramer suffered heavy losses and had to withdraw. If there had been a single intact armoured brigade left, the British could have just marched to Tobruk , but of course there wasn't as 4th Armoured Brigade and 7th Armoured Brigade had been shot up at Halfaya Pass and Hafid Ridge respectively. So the British withdrew to Egypt and Churchill sacked Wavell, most unfairly as Wavell had protested about being forced to launch the attack too early.

So, another trip to the desert ends with quite a different set of protagonists to Gabr el Ahmar. Operation Crusader beckons I think.