Lockdown has seemingly prompted an upswing in my painting output. There were a few bits and pieces I needed for some scenarios I had in mind, so off went yet another QRF order (with that very generous April 20% discount - they are virtually paying me to take it away).

Avid readers will recall I mentioned making some alternate R40/TACAM turrets for my R35s, but in the end I decided I couldn't be bothered and bought a couple of H39s instead. They look a lot like R40/TACAMs and will do very nicely for both 1940 DLMs and everyones favourite panzer battalion, the 100th  which had such an exciting time in Normandy. 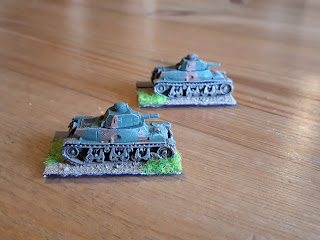 Here they are trundling over the dining table. Like the R35s, these bad boys are absolutely tiny. 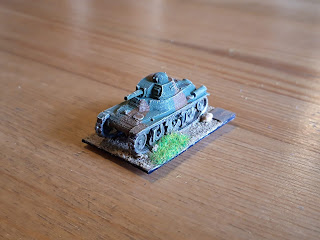 They are beautiful crisp castings, obviously from the same sculptor as the R35s. Turret, hull and separate (reversible tracks) with hardly any flash. Just look at the sharp edges on the turret. 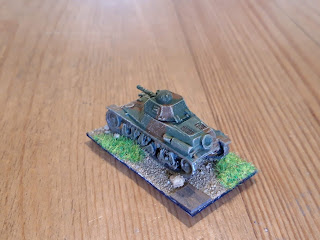 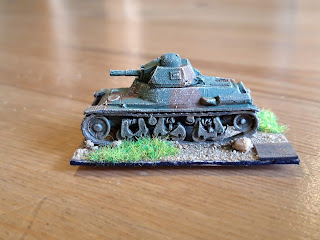 And like the Renaults, exquisite detail on the running gear. I did seriously think about doing these in sand/green/brown camo as all the ones which fought in Normandy were like that but in the end I went with the same dark green/red brown scheme as the R35s so they can fit in together in 1st Rumanian Armoured Div. Otherwise, the usaul inkwash and light drybrush, and job done.