Just back from another exhausting Conference of Wargamers (COW) weekend at Knuston Hall in Northamptonshire organised by Wargames Developments. I really enjoyed this weekend, and was glad I did as I've actually been a little bored by it for the last few years - too many people turning up expecting to be entertained, and not enough contribution.

Anyway, it was much better this year and my enthusiasm has been rekindled. Along with many of the familiar faces I was delighted to see three first timers, giving a welcome injection of questioning enthusiasm. The timetable was packed and I managed to attend lots of interesting sessions with some very useful ideas, had a good a catchup with many people about what they were up to and bounced some thoughts around. I even made a moderate profit on the Bring and Buy, but the inevitable impulse purchase means it looks like another period may be opening up.

As ever the staff and catering at Knuston Hall were excellent, and the weather was kind with just a sprinkling of rain on Sunday. Many thanks to Tim and Bob for organising such an excellent event.

WD Display Team (North) ie me, Jerry, Tim and John ran the plenary game, "Don't Look Now". My main contribution was the title and most of it was down to Tim and his acquisition of an ex-Army Miltra AFV recognition set in a box so heavy that two of us can barely lift it. The rules will no doubt appear in The Nugget at some point, but essentially it was an AFV recognition game set during the Cold War in the 1980s.

The players were divided into 'crews' of 3, and after some rudimentary recognition training were presented with  some terrain at a scale distance of 500 yards (or around 3km with binos) upon which were placed some 1/100th scale vehicles. They were representing a MILAN team, so essentially they had to spot the vehicles and:

1. Decide whether to shoot or not.
2. Identify the vehicles
3. Provide any other useful information, such as what type of formation might have those vehicles

Whilst waiting their turn, the players were entertained by Jerry next door with several copies of a 1971 military recognition guide, which contained some really very obscure vehicles indeed.

We'd playtested this at the Sheffield club and discovered that you needed to be really close indeed to the table to see anything at all, and that at the short distance, most normal binoculars didn't work properly. The vehicles were visible in the open, but if they were in or behind any sort of cover they just vanished, despite 500 yard being extremely close range indeed. The lighting at Knuston was good, and we didn't use a backcloth behind the terrain display, which aided visibility.

The terrain was constructed from the various items provided in the original set, also all scaled at 1/100th. I pretty much standardised the vehicle placement as an open section of road near the church, and on the bridge to make it as easy as possible to spot the vehicles. 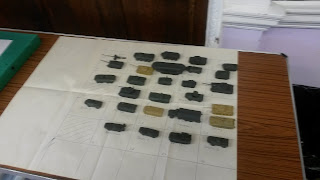 Approximately 40 vehicles are provided in the set but not all were useable. We arranged them on a numbered grid, with pre-set combinations coded by letter (so e.g. Bravo was 4 and 22), so each team was faced with a different mix of types. The mix was determined based on judged experience of the crew (ex and current military/intelligence/analyst types have something of a head start). 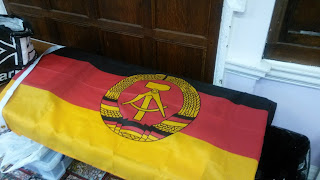 The toys were covered up with a rather grand NVA flag between uses to avoid sneak peeks at the toys.


Tim briefed and supervised the teams while I ran the range.

John kept score for each team and judged the winners and losers based on their identification and shooting skills. There were surprisingly few friendly fire incidents, although a couple of teams just lit up everything in sight.

Some of the teams were very effective,  and although most people did quite well at identifying friend or foe, specific types proved to be hard. The BTR-70 proved to be particularly problematic, it being misidentified twice as a German Luchs. One particular surprise was the couple of times a towed gun appeared. On both occasions it was parked on the road the a white church as background and both teams completely missed it. This wasn't a tiny Pak 36 either, but a gigantic Soviet 100mm AT gun. It just goes to show that guns really are hard to spot when people are looking for vehicles.

I'm not sure it was one of the best plenary games we've ever run, but we got through 40 players in an hour, and there was plenty of time to peer at the toys afterwards. Particular thanks to Jerry for keeping everyone entertained while waiting. The cunning subtext is that maybe someone else will do it next year...

"Coastal Command" is this years show participation game run under the banner of WD Display Team (north). It has already been run at Triples and is on its way Partizan later in the year. At COW it ran in the after dinner 'short games' slot on Friday evening. John took one session and Tim the other, while I floated on the sidelines.

The game covers careers in RAF Coastal Command in WW2, and at first sight is rather an unpromising subject for a game as much of it consists of flying 15 hour sorties looking at water, or fog. John had however constructed an excellent career narrative game packed with historical information, and enough player interaction to keep things interesting. As the war progressed, weaponry and tactics improved by a very considerable extent, so by 1944 all the players had a reasonable chance of actually hitting German ships and u-boats, while the chance of an untimely demise had lessened considerably


The game ran twice, and twelve medals were duly awarded (we always give out medals for a game). Star of the evening proved to be Mike Elliott who managed to sink no less than four U-Boats in his Sunderland, including the most unlucky U-Boat of the war - sunk hours before the war ended.

Around the general subject of participation games we also had an interesting discussion with John Curry abut the possibility of publishing a book on participation games. Not just a compendium of games, but also chapters on how to go about designing and running them. Well, we shall see if anything comes of that.

Whilst passing through the entrance hall I cam across Nigel Drury demonstrating a very interesting boardgame - W1815 by U&P Games.  According to the W1815 Review on Boardgame Geek it is

"a simple strategy game that simulates the key events of the battle of Waterloo in 15 minutes. The French side can try a number of different strategies in an attempt to crush the Anglo-Allied army before the Prussians arrive. Meanwhile, the Anglo-Allied player must focus on keeping his army in the battle by using reserves in right situations until the Prussians get into the action.

The game contains a battlefield map which is used to record casualties and the current strength of the participating armies. The cards are setup around the battlefield map with each card representing a corps. Players take it in turns to activate one corps and carry out an action. The rules for each individual corps action are described on the cards. The results of these actions are then recorded on the battlefield map. The game ends when either army fails a rout test or the time marker is moved to the night square."
A description which doesn't really do it justice. It is a cleverly structured card driven decision game, with the appearance of a conventional board wargame. The pieces rarely actually 'move',  but instead are used to represent the state of the various formations (Corps in this case) while the gameplay is about optimising the use of the various Corps action cards and resource management of your own and the enemy forces.

Whilst it probably wouldn't work very well for a mobile situation, it is ideal for high intensity slugging matches like Waterloo or Borodino. My thoughts instantly turned to WW1 (well, they would, wouldn't they) and I've already got a few ideas kicking around for trying to do something similar for the Battle of Loos.

Anyway, highly recommended if you don't already have a copy, although I gather it is currently OOP awaiting another print run.